Black History Month: Tour gives insight into the history of the Stagville Plantation in Durham 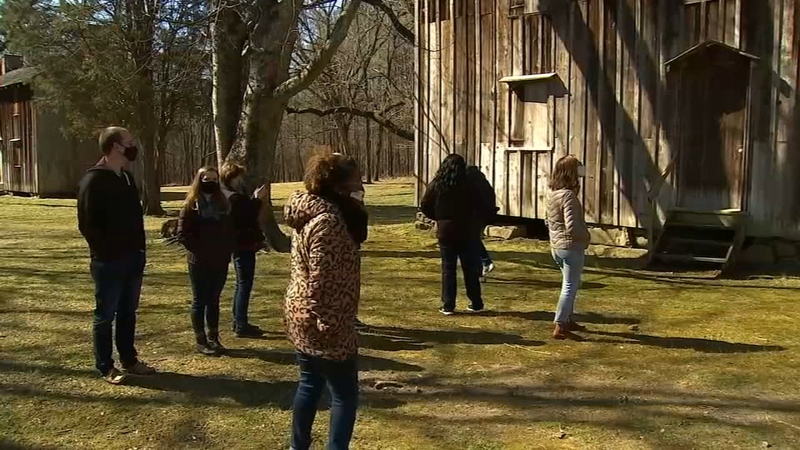 Tour gives insight into the history of Durham's Stagville Plantation

DURHAM, N.C. (WTVD) -- On a chilly Saturday, dozens of people took an in-person tour of Durham's Stagville Plantation for a socially-distanced experience. For a $5 fee they spent 75 minutes learning about how free labor shaped the city.

"In 1865, Stagville was the largest plantation in all of North Carolina. We believe there were a thousand men, women and children who were held in bondage on this site, and who experienced emancipation that year," site manager Vera Cecelski said.

Tour guide Khadija McNair described conditions endured by the enslaved inside wooden buildings they constructed by hand, with no compensation.

"We know that at least ten people were forced to live in each room, in a building. So about 40 people in each building. We know at least 100 people lived in the four buildings that are still standing here," she said. "These buildings were all constructed through enslaved labor. All the wood and stone and nails were built and shaped by enslaved people."

Black History Month was the motivation for people on the tour, including Krystal Speights.

"I really just want to know, if I was a Black person in that time," she asked, "what would it be like?"

"I just learned today that house slaves had it worse, because they had to work 365 days a year," said Diane Speights. "Where the field slaves had Christmas, certain holidays off. But the house slaves did not."

Cecelski said several families remained on the plantation as sharecroppers.

"For almost 100 years after emancipation," she said. "The way that they navigated living in the sharecropping system during the tobacco era in Durham. We'll be sharing stories about how the white family that owned this plantation, the Camerons, showed support for the prison labor system and ways to incarcerate freed people so that freed people would not have access to full rights and citizenship after emancipation."

The organizers of the Stagville plantation tour said coronavirus concerns are the reason they put a twelve person limit on each group guided through the historic property.

Cecelski said, while Saturday's tours are all sold out: "Our site is open five days a week, Tuesday through Saturday, and we have public tours all throughout the week right now. So we encourage folks to give us a call, sign up for one of those tours."