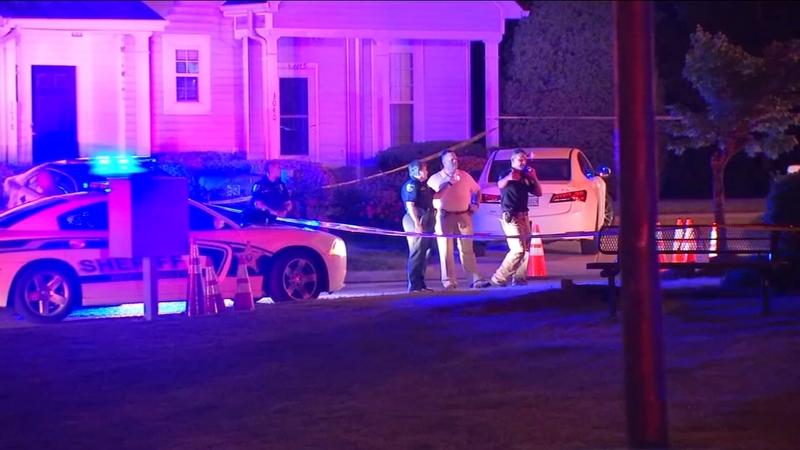 APEX, N.C. (WTVD) -- Officers shot a 51-year-old man five times in April while responding to a noise complaint, according to the newly-released autopsy.

The medical examiner ruled that Stanley Edward Thompson died from multiple gunshot wounds and the manner of death was classified as a homicide.

"They are playing really loud music, it's vibrating my bedroom window," he said.

About 10 minutes later, a man called 911 reporting that his son had been attacked in the same area.

"He was sitting up here and tried to adjust his stereo in the light. And so, he was sitting at the pool and this guy grabbed him," the caller said. "He was trying to get in his car, he had his door open. He had both of his doors open working on the stereo and the guy jumped in the car and basically got on top of him."

When officers from Apex Police Department and the Wake County Sheriff's Office arrived, they learned that the suspect in the assault had left.

K-9s were brought to the area and tracked the scent of the suspect to the townhomes on White Cloud Circle.

Officers started knocking on doors and eventually ended up at 3033 White Cloud Circle, where they were met by Thompson.

Apex Police Department said officers exchanged a few words but Thompson then ended the conversation and refused to speak with them further.

Officers then spoke to a neighbor who said Thompson was known to possess firearms.

Around 10:57 p.m., Thompson emerged from his home carrying a shotgun, police said. A cloud of thick, black smoke was coming out of the building behind him.

Authorities said officers repeated commands for him to drop the weapon but he raised it and aimed it at the officers in a threatening manner while walking toward them.

According to the autopsy, Thompson was shot in the right ankle, the right buttock, the right upper arm, the left thigh and the neck/chest area.

No alcohol, common medications or common drugs of abuse were found, the autopsy said.

"It is unfortunate that a concern over noise was escalated to the point of assault, arson and threats of using weapons against law enforcement officers," Apex police chief John Letteney said at the time. "And we hope to determine why that occurred."

The North Carolina State Bureau of Investigation is in charge of the case.