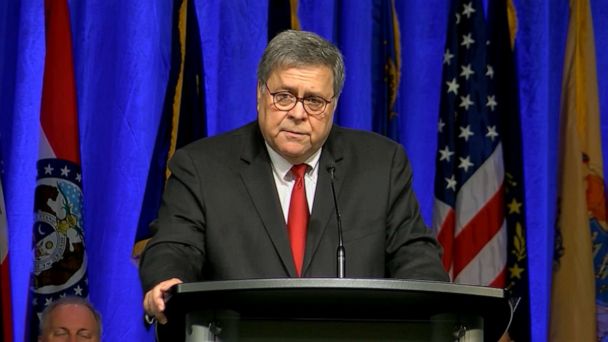 Federal authorities have raided accused sex trafficker Jeffrey Epstein's private island in the Caribbean as outrage grows over his apparent suicide in a federal prison.

"We are now learning of serious irregularities at this facility that are deeply concerning and demand a thorough investigation," Attorney General William Barr said Monday, adding that he was "appalled" by the Metropolitan Correctional Center's "failure" to secure Epstein.

Among those "irregularities" was a series of prison protocols that were violated, including guards who failed to perform their appointed rounds and Epstein's removal from suicide watch, just days after a suspected suicide attempt, according to sources. ABC News also learned it's unlikely that surveillance video exists showing Epstein's death.

"If you're an alleged victim of Jeffrey Epstein, your faith in the federal government may well now be shattered," ABC News' Aaron Katersky says on "Start Here."

In an aggressive push to restrict legal immigration, the Trump administration announced a new rule Monday that could make it more difficult for immigrants legally living in the U.S. who rely on, or simply qualify for, government benefits, such as Medicaid or food stamps, to receive green cards.

The "public charge" policy change marks a shift from family-based immigration to a system based on skills and wealth, according to ABC News' Serena Marshall, and immigration advocates have vowed to fight it in court.

"It's favoring wealthier, higher-educated immigrants for green cards," Marshall says. "This is something ... the Trump administration has been trying to do for a while."

When questioned whether the policy unfairly targets poorer immigrants, Ken Cuccinelli, acting director of the U.S. Citizenship and Immigration Services, said Monday: "We certainly expect people of any income to be able to stand on their own two feet."

Ethan Kollie, a friend of Dayton, Ohio, gunman Connor Betts, allegedly stated that he purchased and stored body armor, a 100-round drum magazine and a component for Betts' gun used during the Aug. 4 shooting, but knew nothing about the attack, authorities said.

Kollie was arrested and charged with lying on a federal gun form, unrelated to the shooting, and possession of a firearm by an unlawful drug user or addict, according to a criminal complaint. He denied that he was a recreational drug user on his firearms forms, but allegedly admitted to investigators, who said they found drug paraphernalia at his home, that he used illegal drugs.

He could face up to 15 years in prison if prosecuted. There's no evidence Kollie participated in the planning of the shooting, U.S. Attorney Benjamin Glassman told reporters on Monday.

A deadly explosion at a military facility off the northern coast of Russia "likely" involved a new nuclear-powered cruise missile, known by NATO as the SSC-X-9 Skyfall, a U.S. official said.

"This is a site that's believed to be the test site for this new generation of cruise missile that's powered by nuclear power," ABC News Senior Foreign Correspondent Ian Pannell tells us. "Unlike commercial cruise missiles, which are geographically limited, this in theory ... could reach anywhere on the Earth."

Russian officials initially insisted that no radiation had been released, prompting comparisons to the Chernobyl disaster in 1986, but later admitted radiation briefly doubled after the blast of a small nuclear reactor.

'Find me a Walmart that isn't a burden on law enforcement resources': A sheriff in Maryland does not mince his words.

'Punishment must be swift': The Justice Department is helping craft a bill to speed up potential death penalty rulings for mass shooters and cop killers.

'We are unable at this time to assure Newark residents that their heath is fully protected when drinking tap water filtered through these devices': Bottled water consumption is on the rise in New Jersey.

From our friends at FiveThirtyEight:

Politics Podcast: How much does Iowa matter?: The crew discusses just how important Iowa really is to winning a party's nomination.

Brad Ryan is on a mission to take his 89-year-old grandmother, Joy Ryan, to all 61 national parks in the United States.

The first one they saw, Brad told "Good Morning America," was the Great Smoky Mountains National Park in 2015. Since then, they've documented trips to almost 30 others -- Badlands, Yellowstone, Glacier, Yosemite, Joshua Tree, Grand Canyon, Zion and Mammoth Cave among them -- on the Instagram account @grandmajoysroadtrip

Brad and Joy have been trapped in an hours-long traffic jam because of a bison herd in Yellowstone's Lamar Valley, and they've seen the Grand Canyon at sunrise.