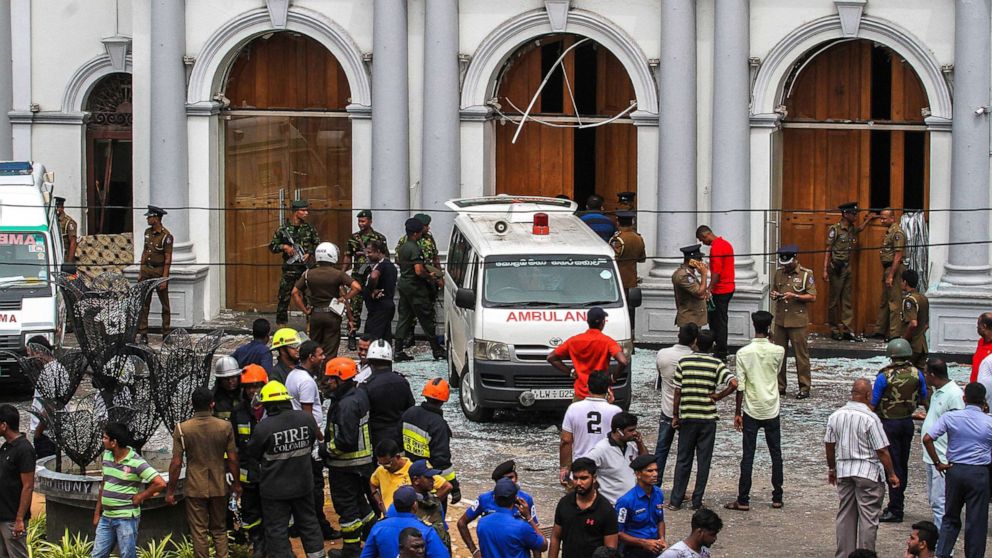 A series of bombings in Sri Lanka targeting Christians and tourists killed at least 290 and wounded more than 500 on Easter Sunday.

Eight bombs, including six at churches and hotels, detonated around 8:45 a.m. local time. No one's yet claimed responsibility for the attacks, but authorities said they'd arrested two dozen people as of early Monday.

"You see church pews in splinters, people running for their lives -- in one of the churches, a statue of Jesus Christ spattered in blood and church pews serving as basically emergency beds in what became a triage ward," ABC News' David Wright says on "Start Here."

Democrats aren't sure what to do next.

House Speaker Nancy Pelosi scheduled a conference call with her caucus today as Democrats consider how to respond after the redacted Mueller report came out last week.

Some party members are calling for President Donald Trump's impeachment, including presidential candidate Sen. Elizabeth Warren, who tweeted her support on Friday for the House to begin proceedings. But other Democrats seem wary of the political cost, and they're more focused on hearing Mueller testify on Capitol Hill and getting his full, unredacted report -- "impeachment-lite," as ABC News Political Director Rick Klein calls it.

"Everyone knows the math," he says on today's podcast. "The politics are different and maybe the reality of just preserving and protecting the constitution demands something else, but if you're going into this thinking that you can remove President Trump from office, you don't know how to count."

The leader of an armed militia group known for detaining migrants at the southern border was arrested by the FBI in New Mexico this weekend.

Larry Mitchell Hopkins, 69, was charged with being a felon in possession of firearms and ammunition, according to the FBI Albuquerque office. New Mexico Attorney General Hector Balderas called Hopkins "a dangerous felon who should not have weapons around children and families."

A spokesperson for Hopkins' group, the United Constitutional Patriots, said they are undeterred by the leader's arrest, telling ABC affiliate KVIA-TV the attorney general "has declared war on American citizens."

The group is known for posting videos online of members detaining migrants and then turning them over to Border Patrol agents, but U.S. Customs and Border Protection isn't endorsing their actions, ABC News' Lana Zak tells "Start Here."

"They warn that there are safety and legal implications," Zak adds. "They call it 'citizen interference.' They don't want this to continue to take place."

Ukrainian comedian Volodymyr Zelensky rose to prominence playing the role of a teacher who accidentally becomes president after a rant against corruption goes viral. On Sunday, he intentionally became president.

Zelensky won Ukraine's election in a landslide, defeating President Petro Poroshenko with 73.2% of the vote, according to a national exit poll.

His anti-corruption campaign attracted voters seeking an alternative to the political establishment, and many Ukrainians actually viewed his lack of experience as a plus, ABC News' Patrick Reevell tells us.

"I think what it speaks to really is this very, very deep frustration that most Ukrainians have with their political system," Reevell says. "They feel that there's very entrenched corruption, and that to be a politician in Ukraine is not a good thing."

'The Trump administration is busy selling off our public lands to the oil, gas and coal industries for pennies on the dollar -- expanding fossil fuel extraction that destroys pristine sites across the country while pouring an accelerant on our climate crisis': Elizabeth Warren promises a different approach to energy policy.

'The president is not going to jail': Kellyanne Conway talks about the Mueller report.

From our friends at FiveThirtyEight:

Which positions do teams obsess over (and overlook) on Draft Day?: The league's rookie wage scale allows teams to employ impact players for far less than what they're worth on the open market, and this surplus value frees teams to spend elsewhere. ... So it stands to reason that to maximize the value of first-round picks (and those bargain rookie contracts) in the draft, teams should prioritize the positions that will cost NFL general managers the most money on the open market.

Sometimes the rescuer needs to be rescued.

Exclusive video obtained by ABC News goes inside a murky, underwater cave in Tennessee during the daring rescue of a highly trained British diver who went missing while exploring.

Josh Bratchley, a member of the elite international team that helped save 12 boys and their soccer coach from a flooded cave in Thailand last summer, was rescued from a cave near Nashville last week.

The video was captured by the helmet cam of Ed Sorenson, a technical cave diver from Florida. About 45 minutes into Sorenson's search, the video shows Bratchley, covered in mud and sitting on a ledge in the cave's air pocket, awaiting rescue. Footage later shows the moment Sorenson surfaces with Bratchley.

"Rescues are very, very rare," Sorenson said on "Good Morning America," "so any time I can bring somebody home back to their family and not in a bag, it's a great day."
Report a correction or typo
Related topics:
abc newsnational
Copyright © 2020 ABC News Internet Ventures.
More Videos
From CNN Newsource affiliates
TOP STORIES