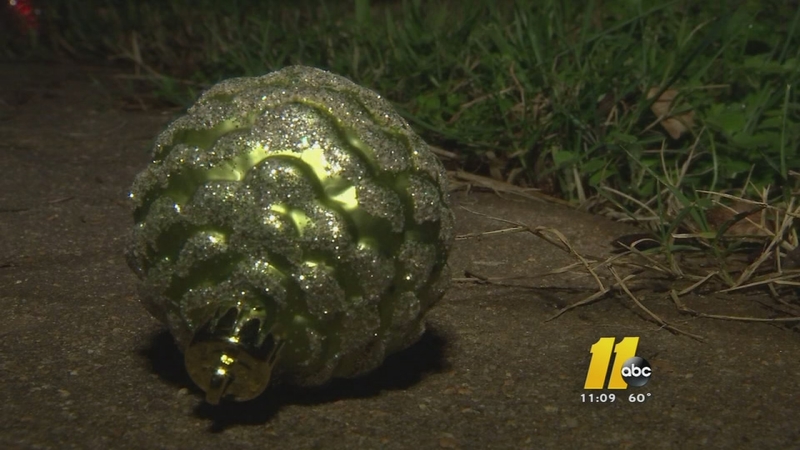 RALEIGH (WTVD) -- Like many of us, the Ward family in Raleigh was gearing up for the holidays and decorating their home.

This year, they bought two Christmas trees - one for inside, one for the porch. Then, in the cover of night, they got a visit from the Grinch.

"It was a shock this morning and it was some grief with the kids and it's kinda unreal that someone would steal a Christmas tree," said Caryn Ward.

The Christmas crooks struck sometime between Monday night and Tuesday morning at the Ward family's home on Everett Avenue in Raleigh.

"I ran out and looked and saw the balls laying on the floor and on the grass and it looked like the tree had been dragged down," said Ward.

Thieves unplugged the tree and took the whole thing. There was nothing left but stray branches and ornaments strewn on the lawn. Ward said it looked like a scene from how the Grinch Stole Christmas.

The family filed a police report and used the Nextdoor app to warn their neighbors about the crime.

The Ward children were heartbroken.

"I don't understand who would steal a Christmas tree on Christmas," said Christian Ward.

The family says they are blessed to be left with the tree the burglars didn't take and are using the crime as lesson to the kids about the true meaning of Christmas.

"We told the kids somebody was in need of a Christmas tree, they were welcome to have it, and figure something out," said Caryn Ward.

The crooks also got away with the tree-topping Christmas star that was passed down from Caryn's mom and a wrought iron stand that was also a family heirloom.

The Wards are asking that whoever took the tree to return it with no questions asked.