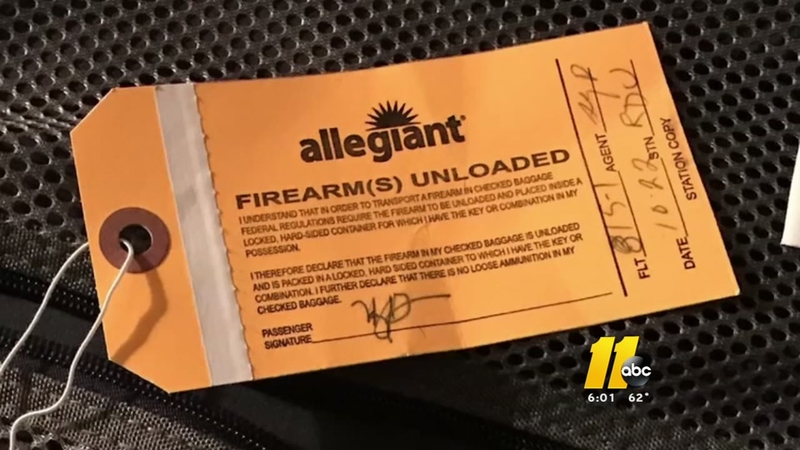 Triangle man has gun in checked bag stolen at RDU

RDU (WTVD) -- Hugh Butler promised his mom they would celebrate her 73rd birthday with a bang by taking her to a shooting range when they got to Florida.

So before the Cary man boarded an Allegiant Air plane at RDU on Sunday, he wanted to know what was required to take his new pistol with him.

"I called Allegiant Airlines to find out, to make sure exactly what I had to do with a firearm," Butler told ABC 11 on Wednesday afternoon in an interview via FaceTime from Clearwater Beach, Florida.

He said he followed the rules - including getting a tag on his small safe for his handgun before putting it inside the bag and checking it.

But after his flight was over, he got quite a surprise.

"When I showed up in St. Pete, I opened up my luggage and that little ticket saying everything was good was still there but the gun was out of the baggage," Butler said. "Like, there was no gun there. It was missing."

Hugh Butler said he followed all the air travel procedures for checking a firearm only to have his new gun stolen.

So he tried calling Allegiant and got angry when he had to wait on hold for more than an hour to even report the missing gun.

And while an Allegiant manager did call him Monday night and promised to call again the next day, Butler said he's never gotten another call.

So he took to Twitter to express his concerns after speaking to a representative of TSA.

Hey @Allegiant, MY GUN WAS STOLEN out of my luggage last night on flight 815. What's your policy on that? Same as if you lost my socks?

My #gun was #stolen out of my #luggage, but yeah, it's "safe to fly". @tsa, @asktsa & @Allegiant, have anything to add about your security?

"They said that it's the airline's responsibility to deal with it. And Allegiant is treating it like I lost a pair of socks," Butler said.

This afternoon Allegiant did reach out to Butler on Twitter.

Around the same time, a spokesperson for the airline responded to an ABC11 inquiry with an email that said, "We are aware and in direct contact with the customer, as well as RDU airport and TSA. Authorities are investigating."

RDU police confirmed they are investigating the allegations and tweeted this afternoon expressing concern and asking Butler to contact police there.

Hugh Butler's mom got to fire a gun in Florida despite the theft.

Butler shared videos with ABC 11 of his mom shooting a gun at a range in Florida on Wednesday afternoon albeit not with his gun.

And he can't help but wonder who now had their hands on the pistol that was in his bag at RDU.