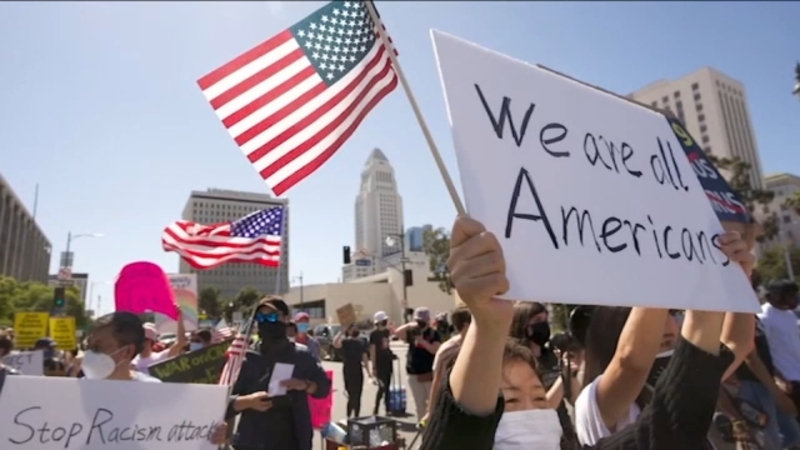 Amid all of the excitement of the NBA Finals and the other big sporting events on ESPN comes a quiet celebration of Asian Pacific Heritage and a plea for understanding.

It's in the form of a 30 second Public Service Announcement that is part of the campaign #StopAsianHate.

The message of tolerance resonates throughout The Walt Disney Company and reaches all corners of the firm, including its TV stations -- where Eyewitness News reporter CeFaan Kim is a force for change.

He's very visible and determined to meet this historic moment, but recent events have shocked those behind the scenes as well.
ALSO READ | Theaters get big boost as moviegoers return over Memorial Day weekend
EMBED More News Videos

Sandy Kenyon reports on the turnout of theaters over the Memorial Day weekend.

The March shootings at a spa in Atlanta that left eight dead, including six Asian American women, inspired one man to do what he does best: Write.

Andy Truong is a copywriter for ESPN, and together with Creative Director Genta Nakahara, he created the unique PSA to try and stop the hate.

The pair work for an ESPN division in charge of promotions, but Truong started this at home.

"We're asking people to empathize with us, to listen to our stories and kind of alter their behavior," he said. "I also thought it was our responsibility to speak up for ourselves."

The result is simple and effective: Simple white letters on a black background with narration.

"I don't really speak out that often," Nakahara said. "But I do have two children. They're 10 and 7. I felt something that's super important is to sort of let them know what's going on."

It also references snowboarder Chloe Kim and golfer Hideki Matsuyama, who recently won the Masters. But they are never seen in the PSA in order to focus fully on the message that less well-known Asian Americans need fans in their communities.

"We make ads, and we're in the business of spreading awareness," Truong said. "And then at the time, I thought there's no better issue to spread awareness of than this."

And that's why he wrote on his own time.

"Then I submitted it to a few people, my bosses, and they submitted to their bosses," he said. "And then kind of the entire network in CreativeWorks just helped foster this entire thing to getting it where it is today."

The reaction has been overwhelmingly positive.