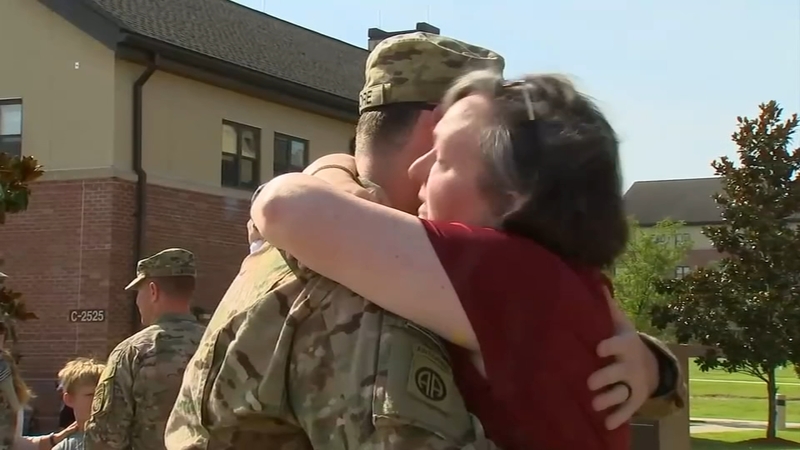 RALEIGH, N.C. (WTVD) -- There are blood relatives and there are brothers and sisters in arms.

"When I hear NATO, to me, NATO should be the front line of defense for all of Europe," Michael Kacher, a veteran who served three tours overseas, told ABC11. "Any country that is free should be standing up to fight for freedom - because what else is there?"

Kacher is just one of more than 700,000 U.S. veterans living in the North Carolina - among the largest populations of veterans in America - and many of them served on the front lines, especially in the War on Terror.

READ MORE: 'Where do they stop?' U.S. veterans, officials explain why protecting Europe from Russia matters

President Joe Biden and military officials continue to maintain that U.S. troops deployed to Eastern Europe, including from the XVIII and 82nd Airborne divisions, will not engage in direct combat in Ukraine.

"It's a constant what-if, and taking that much stress and putting that much on you, it mentally drains you and mentally wears on you," he added. "I look at this, and if this turns into another full-blown war, how many of my friends that are still in the military are going to end up getting reactivated? How many just got out that are going to get recalled? And it's not just the troops that are going through it. You have all the family members back home, friends, husbands, wives, brothers, sisters."
Report a correction or typo
Related topics:
health & fitnessraleighfort braggwarrussiasoldiersveteransukraineptsdmental healthfort bragg news
Copyright © 2022 WTVD-TV. All Rights Reserved.
TOP STORIES
Hurricanes win Game 5, push Rangers to brink of elimination
$1.3M Raleigh home listed on Zillow for $17,000 in latest scam
19 kids, 2 teachers killed in TX school shooting; gunman's mom speaks
4th grader 'did what she had to to survive' Uvalde shooting, aunt says
1 person found dead with gunshot wound in Durham crash
Several companies pull products linked to Jif peanut butter recall
Severe storms possible Friday, nice weekend ahead
Show More
Memorial Day triggers 'heavy' emotions for military families, veteran.
Chapel Hill, Hillside HS students stage walkout for Uvalde victims
Wake, Durham districts discuss school resource officer role
Chapel Hill man charged with murder after body found in burning car
'Goodfellas' and 'Field of Dreams' actor Ray Liotta dies at 67
More TOP STORIES News