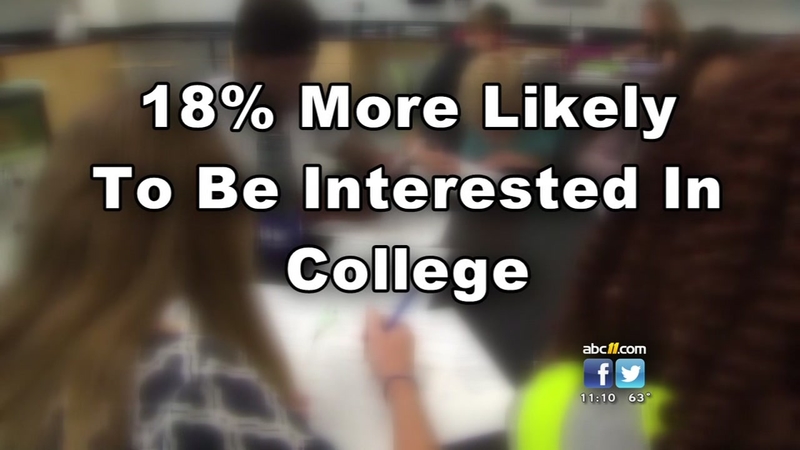 DURHAM, North Carolina (WTVD) -- Turquoise Parker has been a teacher for six-and-a-half years. She started in Chapel Hill and now teaches in Durham. She teaches third grade at Eastway Elementary School.

When she went to college at North Carolina Central University, she said that was the first time she had ever had a black teacher.

"When I arrived at Central, I was like, 'wow a black teacher, this is pretty awesome,' " Parker said.

A new study out of Johns Hopkins University takes a look at how having a black teacher can influence the success of a black student, especially in elementary school.

TAKE A LOOK AT THE STUDY HERE

Parker, who is black, said her story is different from the students profiled in the study. She grew up in a family of educators, but as a teacher now she said she realizes the importance of diverse role models. She said this is especially true with children in third, fourth or fifth grades.

Part of that study out of Johns Hopkins University focused on numbers out of North Carolina. Researchers tracked 100,000 black students entering third grade between 2001 and 2005. Close to 13 percent dropped out of high school. Almost half of the students graduated but had no plans to go to college. Low-income students who had at least one black teacher were 18 percent more likely to be interested in college. That number went up to 29 percent for students on free or reduced lunches.

As far as fixing the problem by hiring more black teachers, Parker said that may not happen as quickly as some would like.

"The profession is not attractive enough," Parker explained.

She cited low pay, coupled with what she described as a lack of support from the top down. She said being a teacher can be an underappreciated profession from the public, so it may not be attractive to those who already feel underappreciated in their own skin.