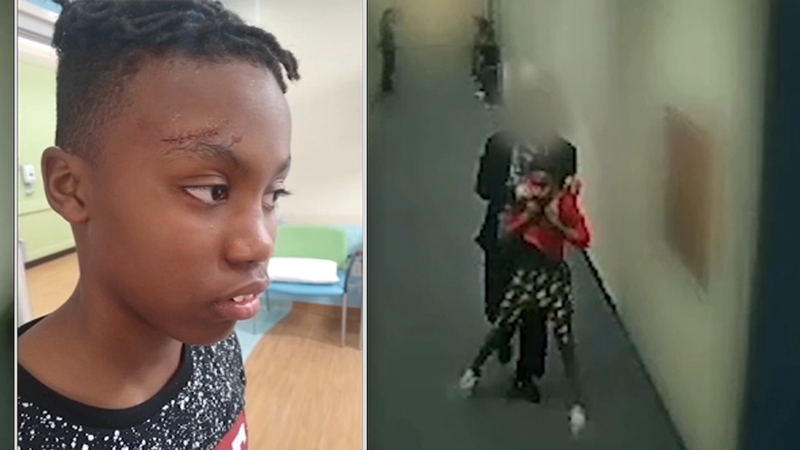 JERSEY VILLAGE, Texas -- Warning: Some may find the video in the media player above disturbing.

A mother is speaking out after a teacher allegedly smashed her 11-year-old son's face into a desk as punishment for stealing a juice box.

Cameras from inside Post Elementary School in Harris County, Texas, captured the alleged incident. It shows 11-year-old Kamarui Williamson being removed from the cafeteria, dragged down the hallway and into a classroom away from cameras.

"You see him. At one point, my son's feet lift off the ground and my son is being choked," Williamson's mother Kiana Randolph said in an interview. "That was very, very upsetting to watch as a mother."

Chelsea Murfree, Randolph's attorney, obtained the video from the school district and provided it to our sister station KTRK-TV.

"This teacher violently picked him up by his sweater, ripping it in the process, and smashed his face onto the desk," Murfree said.

The fifth grader suffered a gash to his forehead that his mother said required six stitches. The initial injury was concerning enough that the boy was airlifted to the hospital.

A Cypress-Fairbanks Independent School District spokesperson said the teacher is under investigation and currently on administrative leave.

KTRK reported that the teacher's nearby home was empty and up for sale Thursday. Other attempts to reach him were not successful.

Murfree said Randolph is frustrated because, by law, she cannot sue the school district. She hopes the teacher is never allowed in a classroom again.

In the meantime, she wants the public to see the video and be aware her son was injured while at school.