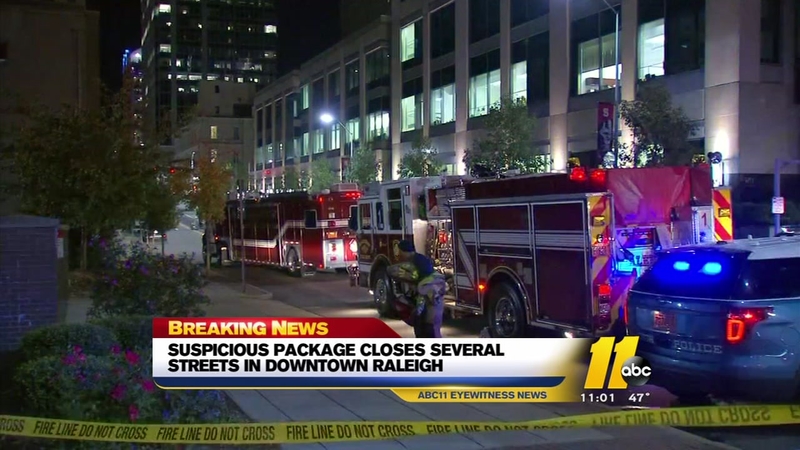 RALEIGH (WTVD) -- UPDATE: The Raleigh Police Department said Friday night that its follow-up work determined that the suspicious item contained no dangerous materials and did not pose a threat to public safety.

Police did not say exactly what the item was.

A caller to 911 said he thought the item appeared to be a pipe bomb near a gas line near the News & Observer building.

"Could be something, could be nothing," the man said in the 911 call.

The case remains under investigation. Anyone with information that might assist detectives is asked to call Raleigh CrimeStoppers at (919) 834-HELP or visit raleighcrimestoppers.org for text and email reporting options. CrimeStoppers pays cash rewards for anonymous tips that help solve cases.

Police closed some downtown Raleigh streets for hours near the 200 block of Salisbury Street after a suspicious item was found.

The investigation began around 7:30 p.m.

Raleigh Police said they collected the suspicious package late Thursday and transported it from the area.

There are no details yet on the nature of the item found.

The bomb squad was at the scene, and a police bomb robot was on nearby Martin Street, just across from the Wake County Justice Center.

Raleigh Fire and Police on scene as investigation continues on "suspicious package" that has closed several streets. pic.twitter.com/avGGBvfJGI

As a precaution, streets around the area were closed. The streets reopened around 11 p.m.