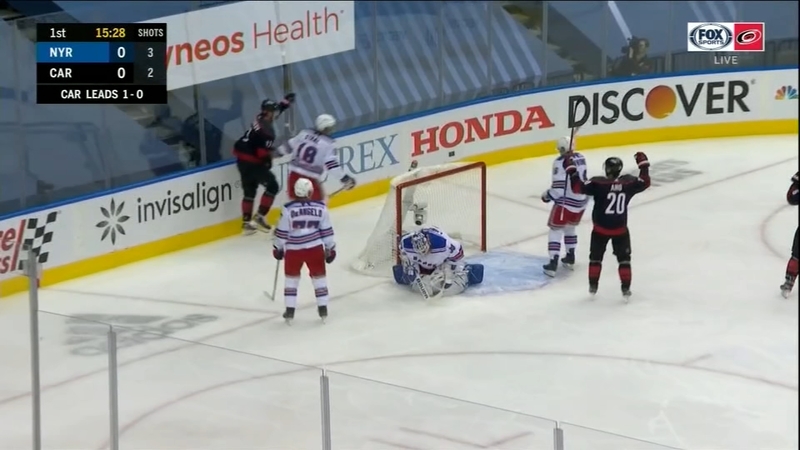 TORONTO (WTVD) -- The Hurricanes are a win away from advancing to the next round of the NHL playoffs with a 4-1 victory against the New York Rangers. Rising superstar Andrei Svechnikov scored three goals becoming the first player to produce a playoff hat trick in franchise history. Petr Mrazek was a monster in the net stopping a couple of point-blank shots in the first period.

Like they did in game 1, the Canes had a strong start. Just four-and-a-half minutes into the first period, Svechnikov went up and over Henrik Lundqvist for the opening tally. Luck certainly played a part in the goal as the pass from Sebastian Aho was deflected right onto the stick of Svech. His magical day was just getting started.

Unable to feed off the fans in this neutral site game, Mrazek found some inner superpowers. He made a dazzling glove save to rob Brett Howden with 11:48 left to play in the first period and followed that up with another beauty off the blade of the ever-dangerous Mika Zibanejad who was all alone in front.

The Hurricanes special teams delivered again in the second period. Off a draw at the start of a power play, the 20-year-old Svechnikov had an absolute blast for his second goal of the game.

Just more than a minute later, the fourth line, working hard in front of the net, paid dividends. Jordan Martinook had his first career playoff goal to make it 3-1. That set the stage for Svechnikov who scored for the third time at 14:02 in the third off a pass from Aho.

"I think he'll get a few more (hat tricks) before his time's over in his career," Carolina coach Rod Brind'Amour said. "He's a gamer, too. this guy is one of those players in this break that worked on this game, he wanted to get better. I think you're seeing that."

The 6-foot-2 Svechnikov, the No. 2 pick in the 2018 draft, had an assist in Saturday's Game 1 victory then followed by delivering a game-high six hits in this one to bring a physical edge.

The Rangers had swept the regular-season series, and the Hurricanes rarely led in any of those four meetings. But the Hurricanes have yet to trail in two games in Toronto and now have a chance to sweep the best-of-5 series.

"We've got to reset our minds and get focused on winning one hockey game," Rangers defenseman Marc Staal said. "That's all you can do at this point."

The Canes can wrap up the series Tuesday night. Game 3 is scheduled to start at 8 p.m.