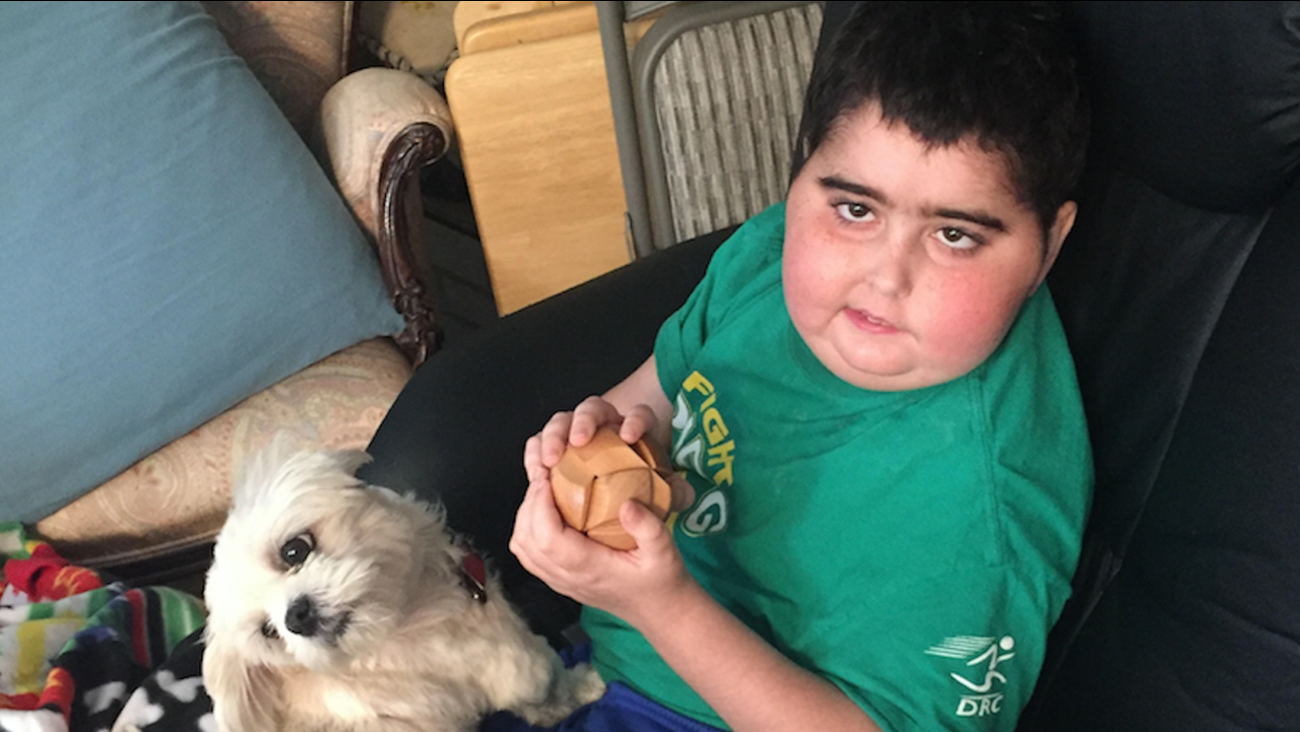 (The family of Joshua M. | Babble)

Joshua was a bright, energetic 11-year-old when his family learned earth-shattering news about his health last year: He has a rare and aggressive form of brain cancer called DIPG (Diffuse Intrinsic Pontine Glioma) that cannot be cured. As the Buffalo Grove Patch reports, the goal of Joshua's medical team and family is to keep him comfortable and happy in his last days -- and they've been devoted to that cause ever since.

"From the beginning, they've been told: there is no operation, no chemotherapy," Bradley Egel, a neighbor and volunteer family advocate, told Patch. "There is no current medical technique. There is no hope. Tomorrow, some scientist could come up with something. But it won't affect Joshua at this point, it's going to affect someone else down the road. The tumor has grown in such a way, it's unsustainable for living."

For months, the one thing Joshua wanted more than anything was a dog. His family already had a dog, but he wanted one for himself -- a companion he could snuggle with, who would sit patiently in his lap, and sleep with him.

With help of the Waukegan Police Animal Control and Wags to Wishes Animal Rescue, Joshua's family has been able to make that wish a reality.

As Waukegan Police detailed in a Facebook post last month, finding the perfect dog for Joshua was "a tall order," complicated by the fact that they were on a tight timetable, since they were hoping to get a dog for Joshua while he was well enough to bond with it.

But on Monday July 25, they found just the right dog for the job. Her name was Isabelle, though Buffalo Grove reports that Joshua has since changed her name to Bean. Sadly, the Shu Tzu mix was "in very severely poor condition due to neglect" when she was found, according to the Waukegan Police.

But she is everything Joshua wanted in a dog, and that's all that mattered.

Joshua was at the Rehabilitation Institute of Chicago when his mother, Lisa Dluger, came to visit -- and surprised him with Bean.

"His eyes got so wide," Dluger told Buffalo Grove. "He has been pretty lethargic ... [but] Josh is a joke-teller. It was good to see him laugh, and cuddle. His personality came back out."

Indeed, the pair bonded immediately, and Bean has been at Joshua's side ever since.

"She needed Joshua more than he would know," the Waukegan Police shared in their now-viral Facebook post. "Quickly, [the dog] found herself snuggled up on Joshua's lap as if she had been there forever. Joshua noticed her shaking and did not hesitate to hold her tighter and give her the comfort and security she needed."

Buffalo Grove also reports that Joshua recently had some tissue removed for research, and has lost his ability to speak. As a result, most of his communication has to happen via text these days. He's also confined to a wheelchair most of the time.

Speaking via text, Joshua is quick to share some of his very own thoughts about Bean, his most prized possession:

"Well, Bean is a calm dog, and is willing to lay with me to lighten up my mood in any state," Joshua tells Babble. "Also since I can't talk right now I can get out my anxiety by pretending to talk my problems to Bean. Bean is also willing to be my little walking doll and, so this is lighting my day a ton!"

The creature comforts and unspoken friendship of a sweet dog like Bean seems to be just what the doctor ordered. And all that anyone wants for Joshua is happiness and comfort in these last days of his life.

"It boils down to a boy and a dog that needed each other," said Egel. "The dog needed to be rescued, and so did Joshua. It's not going to save his life, but it's going to improve it."

To donate toward Joshua's medical care, please visit his Go Fund Me page. Follow his journey on Facebook.