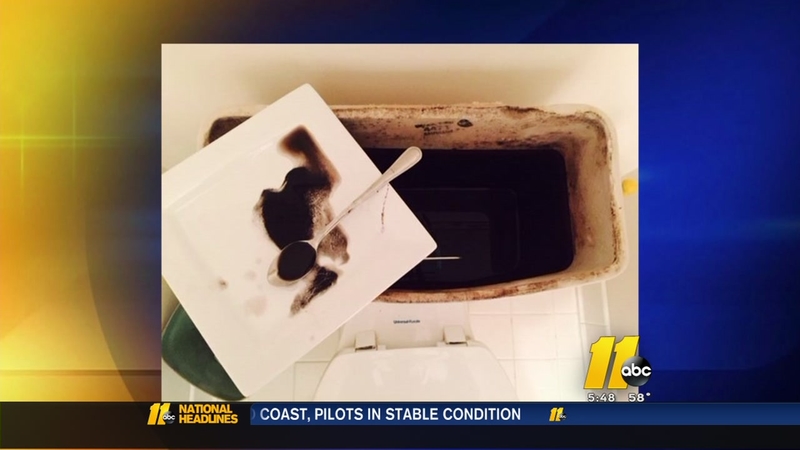 What's in your water?

RALEIGH (WTVD) -- Across the Triangle and the state, there are neighborhoods with a secret: bad water.

Folks living with it will tell you it's the worst-kept secret in the world, but if you're looking to buy a home in those neighborhoods, you likely won't hear about. Unless, of course, you ask around.

"I would never buy a home serviced by Aqua. Never. Never in a million years," said Raleigh resident Beverly Thomas.

That's how strongly Thomas feels about her water. She lives in a south Raleigh subdivision that gets its water from Aqua NC, a subsidiary of Aqua America (NYSE: WTR). Aqua NC provides water to more than 250,000 North Carolinians who aren't on municipal water.

Aqua got its foothold in North Carolina in the early 2000s, largely by acquisition.

Map of areas serviced by Aqua NC in Wake County.

Broadly, the company takes over troubled private well systems, promises to make them run well, and then manages the distribution of the water.

But Aqua NC's customers, many of whom live in affluent suburban communities, have complained for years about Aqua's service and the quality of the water coming out of their faucets.

"I know something's wrong with that water. I was born here, OK?" said Barbara Watson, a Raleigh retiree living in the Sandy Ridge subdivision south of the city.

She, like many of her neighbors, buys water for everything other than showering and laundry. Some homeowners say they can't even wash their clothes because of black residue left behind.

"I buy my water from Sam's Club at $2.98," Watson said. "I got it all stacked up. I do not drink this water. And I do not cook with this water." Watson does, however, pay for the water she gets from the tap; about $30 per month.

It's the same at other homes in Watson's neighborhood. Thomas lives a few doors down.

"It's black gunk," she said, referring to the manganese that builds up in her water lines. "And it builds up and it's all in the pipes so even if we put a whole house water filter on, it's still in the pipes. We're still going to get some of it. And when Aqua comes and flushes the lines that makes it worse because it pushes it back into all these homes."

The problem for Thomas, Watson, and anyone living with bad water from Aqua NC is that the company pumps it straight out of the ground and often doesn't filter it in any way. That's something Thomas says she learned after moving in.

Map of areas serviced by Aqua NC in North Carolina.

"I was shocked to find out there's not even a filter on that well. You're drinking it right from the ground. Everybody is. And I doubt if people around here even know that.

"Even if we dug our own well, we're still going to get manganese. It's right here," Thomas added.

"Aqua understands customer concerns about discolored water caused by naturally occurring minerals in the groundwater," Gretchen Toner wrote, "and we're in the midst of a significant filter installation program to address the problem."

Toner told the I-Team she's compiling data for the I-Team showing filtration projects in the state going back 10 years.

Frustrated homeowners tell the I-Team that they're skeptical of promises by Aqua NC. Asked why, they rattled off example after example.

"He's filed a complaint after complaint with anyone who would listen," Thomas said of her husband, who was the first to move into the Sandy Ridge development in 2000. "The local people they send out, some of their workers test the water and of course they say it passes; because the standards are so low in North Carolina."

Thomas recalls a time when she called to complain and a service person came out to take a water sample.

"And I knew what he was going to say because it's the same thing all the time," she said, "that it's fine that there's nothing wrong with it. That manganese is in nature and can't be helped and there's no harm. Even when I showed him the paperwork of manganese and the harmful effects, he didn't want to hear that.

The EPA says elevated levels of manganese generally won't hurt a person but there is conflicting data on what sustained exposure to particularly high quantities might do.

The environmental advocacy group Clean Water for North Carolina put out a paper showing some of the risks that can be associated with various pollutants in tap water.

"If you look up manganese," she said, sitting at her kitchen table, "that's what's you're going to find. All these Parkinson's-like symptoms, for young children their motor skills, it affects a lot, liver, kidneys, it's a lot. I don't want to chance it. You know, if someone tells me it's fine you can drink it, you can shower in it, and then if I'm reading something different, I'm not going to put myself at risk."

Thomas said she and her husband go through 30 gallons or more each month.

"We're paying for dirty water we can't use, plus we're buying clean water to protect ourselves."

Homeowners across the Triangle living with Aqua water also worry about its effect on their property value. Many would only speak to us about the problem on background or on the condition of anonymity for fear that it could have a negative effect down the road should they want to sell, but they all told the I-Team that buyers should be told about homes with bad well water before they move in.

Currently, there are no such requirements. Sellers have to fill out a three-page disclosure form that requires them to say where their water comes from and whether there are any problems with it. But where that may seem like all it would take, Realtors say there's more to it.

Realtors aren't required to tell potential buyers about the quality of water unless it's listed by sellers as a "material fact" that could change the value of the home. And real estate experts say poor water quality doesn't quality as a material fact because Aqua NC is operating within the law.

All that manganese may render water unusable for many intents and purposes, but it usually doesn't fall outside of the guidelines of the Clean Water Act; and Raleigh Realtors Association President Mark Parker says that makes all the difference.

"Unfortunately, although several of the examples you given me sound severe," Parker told the I-Team, "it may not be considered a material fact. They're not breaking any rules. The dilemma is, if the company is not breaking any rules, we are not responsible or accountable for disclosing that since it's a non-material fact. I would recommend we get some legislation put in place the changes that where those guidelines are in place right now because clearly it's not adequate water quality control measures that are in place."

Parker says his group has a PAC on Jones St. (a little capitol press corps slang for the state legislature) that advocates for homeowners and expects it will jump in and try to help with Hall's legislation. "If something is going on that could adversely affect property values, we want to know about it so we can put corrective measures to make sure the situation is corrected."

Aqua NC isn't alone in that space in North Carolina. Utilities Inc. is another private well operator with system across the state. It's not as big as Aqua and no Utilities Inc. customers complained to the I-Team, but Clean Water for North Carolina recently released a report on both running down both the caliber of their service and the quality of their products.

Mark Parker with the Raleigh Realtors Association offers this advice to folks looking at homes in communities in private wells. "We always recommend people get a well and septic test as well as check the quality of water in that particular property, whether it's a private one, we can always test the water at the faucets. So we highly recommend buyers do their due diligence in and do all their adequate inspections at the time they purchase their home."

Its advice that squares with just about everything we heard from residents, maybe summed up best by Ron Campbell. He's retired and living in the Sandy Ridge community in south Raleigh. He says he was the first person to move into that subdivision in 2000 and he's been on Aqua from the start. Asked what he'd say to someone considering a home in his neighborhood, he replied in a thick drawl, "Before you move into a home or any neighborhood that has Aqua water service, check it out thoroughly and really think about it good now."

As we were finishing up our story, Toner, a communications manager with Aqua America, wrote the I-Team an email offering more detail about the company's filters and filtration projects. She attached this infographic breaking down Aqua NC's services and reach. Here's the text of her email:

"I'm writing with more information about Aqua's filter installations to remove naturally occurring iron and manganese from groundwater. These minerals are not considered harmful by the U.S. Environmental Protection Agency, but they can discolor water and affect its taste. We absolutely understand that we have dissatisfied customers who are experiencing this issue, and we're in the midst of a significant filter installation program to fix the problem. Iron and manganese water treatment is a statewide priority for us in North Carolina.

"Over the past 3 years, Aqua has installed a total of 19 greensand filters in North Carolina statewide to remove iron and manganese from the groundwater. Out of that total number, we have installed 15 in the Raleigh/Durham area. We currently have an additional 11 filter installations in progress statewide. On top of all of those projects, we've also installed more than a dozen filter cartridges - most of which are in the Raleigh area - over the past 3 years to help keep iron and manganese from discoloring the water and affecting its taste. The iron and manganese problem is a longstanding one, and it will take time to fully resolve. We're using the state's water and wastewater system improvement charge to accelerate these projects for our customers.

"In response to the specific communities you mentioned, we recently installed a filter in the Bloomfield subdivision, and we have a filter installation in progress in Mallard Crossing (we serve two systems with this name, one of them in Raleigh and one in the western part of the state. The installation in progress is in the western part of the state), and we expect that one to start up in December. We're in the midst of preparing a proposal for state approval of a new filter at Barton's Creek Bluffs.