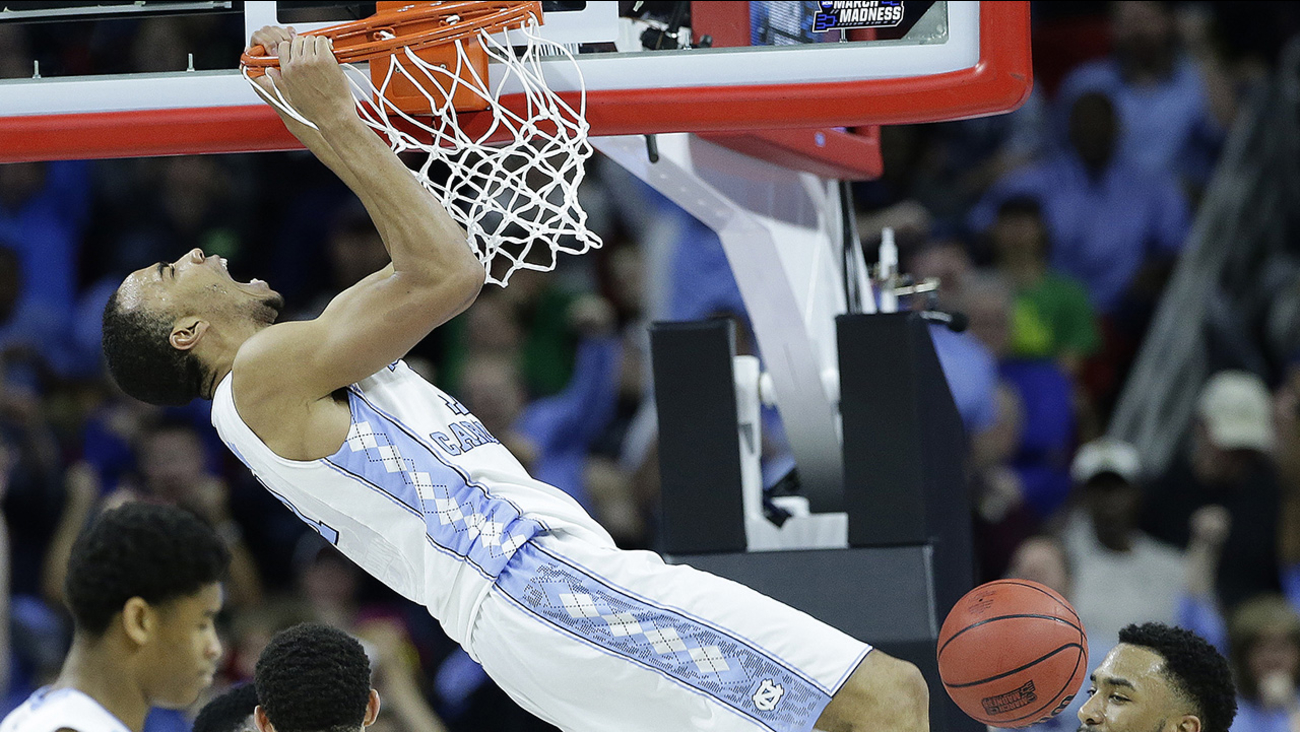 RALEIGH -- Brice Johnson had 21 points and 10 rebounds, and No. 1 seed North Carolina pulled away from foul-hit Providence 85-66 on Saturday night in the second round of the NCAA Tournament.

UNC on its way to Philly https://t.co/mzsCTonNIt

Brice screams into the hallway 'I'll see you all in Philly!!'

Joel Berry II added 15 points for the East Region's top seed, which found itself in a fight well into the second half against the Friars' high-scoring duo of Ben Bentil and Big East player of the year Kris Dunn. But the Tar Heels (30-6) stepped up their offensive efficiency, attacked the paint and started cashing in at the line as the fouls piled up for Providence (24-11).

Justin Jackson scored on a drive to start an 8-0 run that broke a 41-all tie, and then Johnson scored six straight points in the 10-0 burst that put the Tar Heels up 17 with 6 1/2 minutes left.

North Carolina shot 61 percent after halftime and 53 percent for the game, and made 19 of 21 free throws - 15 of 16 after halftime. And that was enough to help the Tar Heels advance to the Sweet 16 for the second straight year after two straight opening-weekend exits.

Dunn had 29 points for the ninth-seeded Friars, though he sat much of the first half with two fouls and picked up his fourth while trying to strip Johnson in the lane with 8:44 left. Bentil fouled out on a rebound attempt with 7:23 left, finishing with 21 points.

Providence shot 40 percent, but made 6 of 23 3-pointers and missed nine free throws - costly missed chances for a Friars team relying largely on two scorers to try to keep pace with the Tar Heels' deep attack.

While Johnson and Berry led UNC's offense, the Tar Heels also got 15 points from Jackson, 13 from Isaiah Hicks and 12 from Marcus Paige in the kind of wear-you-down-and-pull-away formula that pushed them to a No. 1 seed.

Providence came to North Carolina searching for its first NCAA Tournament win since 1997. It got one on Rodney Bullock's last-second basket to beat Southern California, and then stayed right with the Tar Heels through the first half to trail just 34-30 at halftime.

Dunn's steal and dunk even gave the Friars a 36-34 lead early in the second half, but the Tar Heels eventually settled in and started pulling away.

North Carolina: The Tar Heels finished with a 42-24 rebounding advantage. . Paige made two of UNC's four 3-pointers in a 4-for-14 performance behind the arc. . Hicks had seven rebounds.

North Carolina advances to face Indiana on Friday in Philadelphia.