Teen in viral picture at Raleigh Target store gets the job 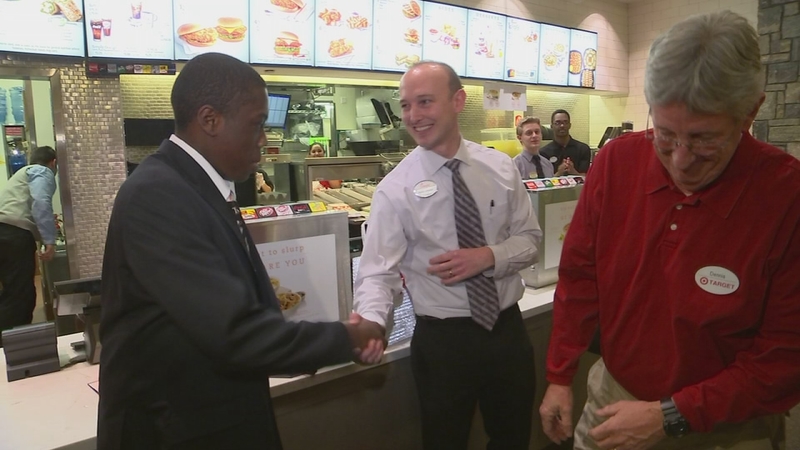 RALEIGH (WTVD) -- Remember the 15-year-old who became an internet sensation earlier this month when a picture of Target employees helping him pick out a tie and prep for a job interview went viral?

A shopper saw the Target employees helping the boy and snapped a picture that she posted on Facebook.

Yasir Moore needed that tie to apply for a job at Chick-fil-A at Triangle Town Center mall.

ABC11 was there Thursday night when Moore went back for his third interview at the restaurant. He had no idea that our cameras were rolling when restaurant owner David Langston asked him to have a seat.

"I really appreciate you coming in tonight," said Langston. "I think we are ready to offer you a job at Chick-fil-A of Triangle Town Center mall."

He even got his own Chick-fil-A tie.

"We may have someone in the food court that can help us out with that ..." said Langston.

The same Target team that helped him before came to help again. Just like the first time they met, Dennis Roberts helped him tie the tie.

"It's refreshing to my heart, and I'm deeply grateful I was a part of it, and I'll remember it forever," said Roberts.

Once strangers, the kind moment has connected the group.

"They're like family to me now, because they helped me so much," said Moore.

"We told him he has two more moms looking out for him. We'll be out to Chick-fil-A checking on him," said one of the Target team members.

Audrey Mark, who took the original picture, was there too.

"I was moved when I saw it happen the first time and now to see it come to fruition was very emotional for everybody," she said.

"They still went above and beyond to make sure he was right for his interview," said Najirah Parrish.

Moore's new boss at Chick-fil-A said the lesson in it all is obvious.

"They didn't just change my life, they're going to help me change other people's lives," said Moore.