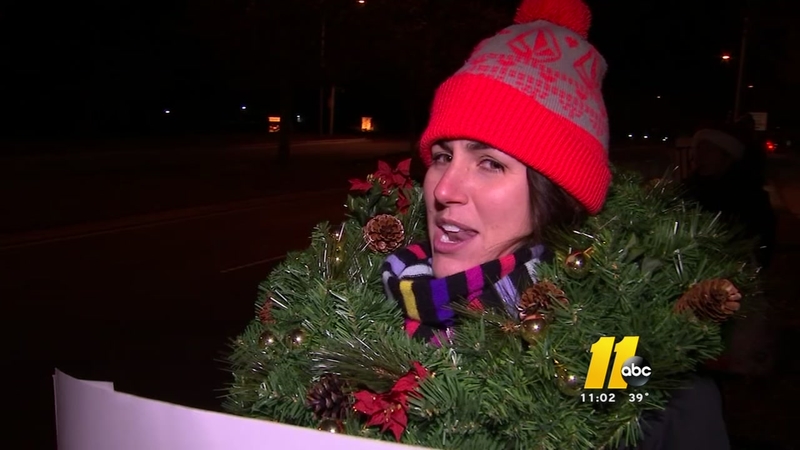 Christmas caroling about GOP tax bill breaks out in Durham

DURHAM (WTVD) -- Hours after President Donald Trump sang the praises of the GOP-backed tax overhaul plan that took a big step forward in Washington Wednesday, protesters in Durham were singing a different kind of tune to anyone driving by willing to listen.

"This is what democracy looks like," said Suzanne Macdonough, one of the small contingent of protestors decked out in Christmas wear trying to get the attention of shoppers near Southpoint Mall.

They are part of the group, Protecting Progress in Durham.

"Every single one of us is representing thousands and thousands of North Carolinians who would be hurt by this tax scam."

They sang "tax scam carols" as they urged people to line up against this major piece of legislation.

"What we really want people to understand is this is supposed to be a season of giving but the only giveaway that's happening here is a giveaway to the ultra-wealthy," argued Eleanor Wertman.

At the White House, Trump heralded the news that Republicans in the House and Senate had reached a compromise on the $1.5 trillion rewrite of the tax code.

"We want to give you, the American people, a giant tax cut for Christmas," Mr. Trump said. "And, when I say giant, I mean giant."
Changes are still in the works, but the compromise reportedly lowers the corporate tax rate to 21 percent, reduces individual tax rates for the wealthiest Americans to 37 percent, scales back some popular tax breaks, and repeals the Obama-era health insurance mandate.

"And it makes America competitive again," the president said.

Back in Durham, these opponents of the plan insisted it adds up to a major campaign promise broken by President Trump.

Republicans in Washington said the tax overhaul is close but not complete.