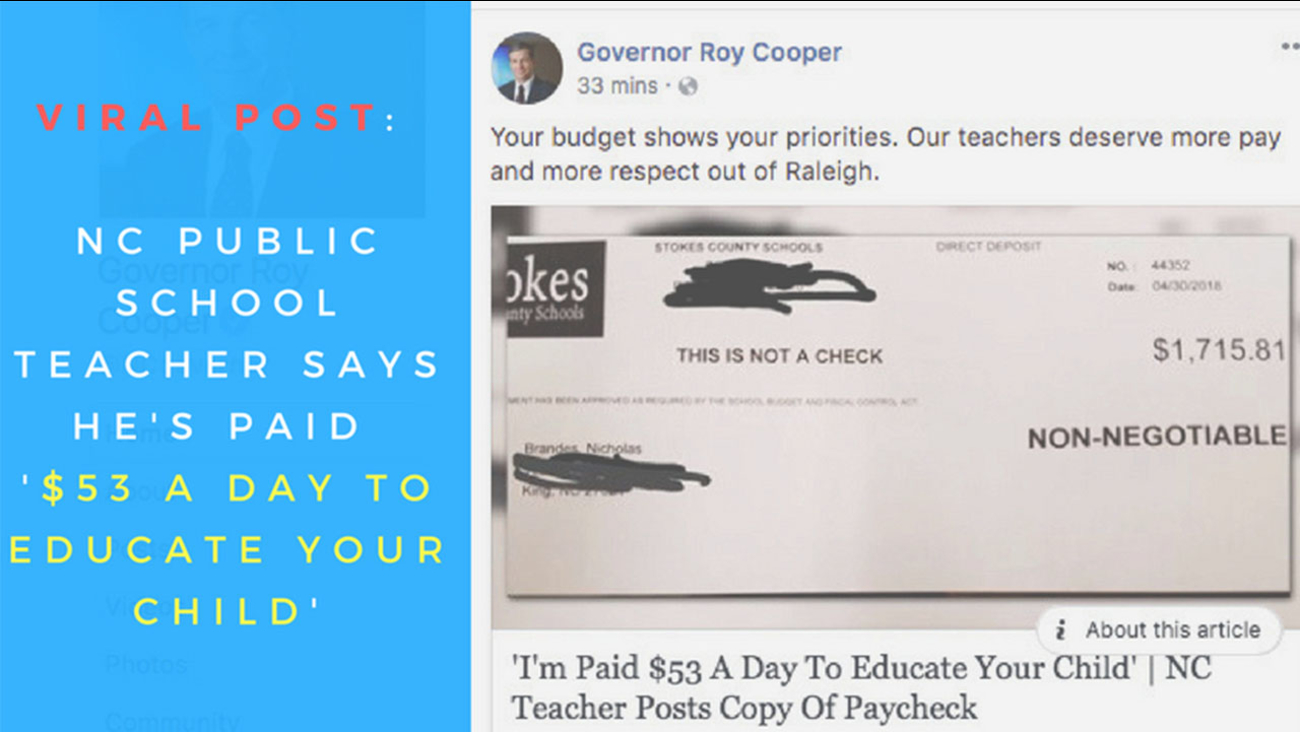 For the hottest debate in North Carolina politics, look no further than teacher pay.

Gov. Roy Cooper often talks about the need for higher teacher pay. Meanwhile, Republicans in the GOP-controlled legislature brag about raising teacher salaries each of the past five years.

Now, after teachers rallied in Raleigh on May 16 to raise awareness about the need for more education funding, one teacher's story has gained traction in the politisphere.

Nick Cols, a teacher from Western North Carolina, posted on Facebook that his "take home pay" for April was $1,715 after insurance and child-care and taxes were deducted.

"I am roughly being paid $53 a day to educate your child," he posted.

PolitiFact usually sticks to fact-checking politicians, pundits, fake news sites and prominent organizational leaders. But this claim quickly gained traction not only in North Carolina news but across the country. His story was shared by Cooper and others to emphasize their position that state lawmakers aren't properly funding education.

With that in mind, PolitiFact found it necessary to review his claim.

Wage information for public school teachers - and all government employees - is public record. So Melisa Jessup, executive director of human resources for Stokes County Schools and the district's lead spokeswoman, provided PolitiFact with the teacher's information.

The teacher - whose full name is Nicholas Brandes - works at North Stokes High School and has been a teacher for nine years and eight months, Jessup said.

North Carolina's public school teachers also receive supplements from their county governments. In Stokes County, that means Brandes gets about 4 percent of his annual state salary added to his pay from the county. That would mean a teacher with his level of experience makes about $42,172 per year before taxes.

On top of that, Brandes is currently an assistant coach for the football and wrestling teams. So he receives an additional $2,300 for each year that he coaches those teams.

How his pay compares

So that puts his annual salary at $44,472 before taxes, health insurance and childcare costs are taken out.

Some teachers choose to only accept checks during the school year, which runs from mid-August to early June. Brandes chose to have his salary spread out over 12 months, so his monthly income is about $3,706. And, according to Jessup, his deductions for "optional supplemental insurances and various other pre-tax deductions, as well as health insurance costs" come out to about $954 a month. That includes childcare.

Now let's look at weekly and daily pay. Excluding holidays or days off, there are typically four five-day work weeks in a month. A monthly $2,752 paycheck spreads out to $688 a week and $137 a day.

Rather than speak hypothetically, let's return to the $1,715 paycheck Brandes posted on Facebook. There appear to be problems with the teacher's math.

That difference of $26.76 per day doesn't sound like much. But extrapolated over 21.5 days, there's a $575 difference between what readers might think Brandes earned in April versus what he actually made.

Apply the same math ($575 times 12) over a year and there's a difference of $6,906 between what Brandes could be taking home annually compared with what could be derived from Facebook and in the media.

Fact checking the news in real time on Politifact

A teacher in western North Carolina said he makes $53 a day, spurring politicians to use his claim to support their position that teachers across the state are underpaid. The difference between what the teacher claimed and what the records show is about $26.76. In other words, his daily pay in April was about 50 percent higher than he claimed it was.

What teachers make is an important debate - one that should be won or lost on solid numbers. There are many ways of illustrating a correct number, but the $53/day is not the poster child it was made out to be.