After record-setting teachers rally in Raleigh, what happens now? 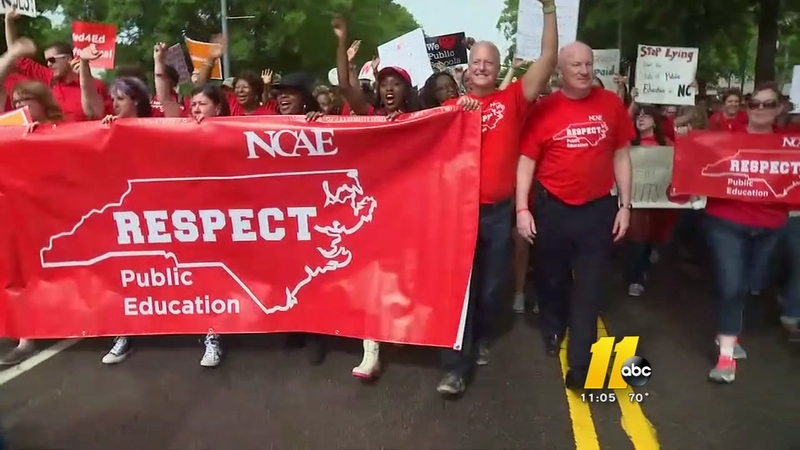 RALEIGH, NC (WTVD) -- As scores of North Carolina public school teachers head back to their classrooms and state lawmakers resume their legislative session - it becomes clear that any big changes to the state's education funding priorities are unlikely to come in the short-term. It's more likely to happen in November.

Hours after the record-setting rally ended outside the General Assembly, rally organizers were smiling and taking group photos inside NC Association of Educators headquarters - still jubilant and hopeful.

"What a day for public education in North Carolina," NCAE President Mark Jewell said. "When we had 30,000 citizens rise up and say we need to fund our schools properly."

"This is not just an advocacy day. It's truly an advocacy movement." -- We caught up w today's #NCTeacherRally organizers to ask, what's next? #Red4ED #TeamNCAE pic.twitter.com/lUUwjDM03C

But are teachers too hopeful about satisfying their demands to boost per-pupil spending to the national average, more money for school construction, and a multi-year pay raise for teachers and support staff to push North Carolina out of 39th place in the U.S. for teacher pay?

Republican leaders who heard those pleas on Bicentennial Plaza sounded unmoved - maintaining that the legislature is already doing right by teachers.

"A 6.2 percent (teacher salary) increase (this year)," House Speaker Tim Moore told ABC 11 on Wednesday in defense of GOP education priorities. "How many people out there not working for state government are getting a 6.2 percent pay increase this year in their jobs?"

Jewell acknowledged the changes NCAE is lobbying for aren't likely to happen without a shift in power inside the Republican-controlled legislature.

"We're going to have to shift some of the players," Jewell said. "This isn't just a May 16 thing. This is going through spring, summer, fall, and November. All eyes on North Carolina."

Larry Drucker, a Union County science teacher said he felt hopeful that a statement was made.

"It was elation. It was really great. Great to see teachers together marching," Drucker said. "It was great to see all of us make an impact, we hope, on our General Assembly."

"This is not like before," she said referring to past efforts to galvanize public support at the polls.

"The fact that everyone is not a teacher, that means we're bringing a community together," Harris said. "We're making changes together. We can't do it alone as teachers."

Brichett, didn't just take off from her teaching job Monday. She also skipped the other three jobs she said she holds to make ends meet. Now, it's back to work.