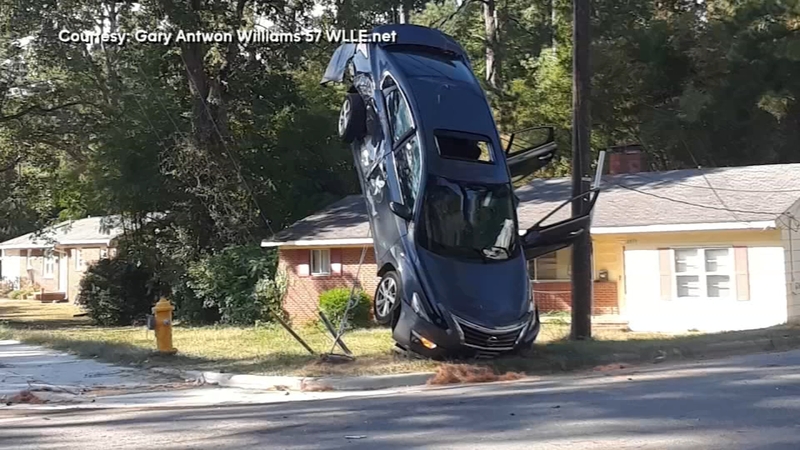 Car involved in wild crash in Raleigh over the weekend was stolen by 16-year-old three weeks ago, police say

RALEIGH, N.C. (WTVD) -- Raleigh police said the car involved in a wild crash on Milburnie Road over the weekend was stolen by a 16-year-old boy three weeks ago.

According to police reports, the car was speeding through a residential area on Chatham Lane at 50 miles per hour in a 35 mph zone.

The stolen car was driven by a teenager who doesn't have a license.

When the car blew through a stop sign on Milburnie Road, it was t-boned by another car -- launching it up the side of utility pole.

"One of the cars is up on power lines. It flipped the car up in the air. And there's gasoline all over the ground," one 911 caller said. "And there's people coming all around where the power lines are kind of coming down."

Police arrested the driver 16-year-old Lonnie Milhouse and charged him with possession of a stolen car, reckless driving to endanger, driving without a license and property damage.

Three weeks ago, Rhonda Hailey, the owner of the car, was unloading it and planned to make one more trip back to the car but got sidetracked -- leaving it unlocked with the keys in the ignition.

Hailey realized her mistake when her car was gone the next morning.

"Well, you know, it's kind of my fault but then again it wasn't theirs to take," Hailey said. "So I'm like feeling really dumb about that. But you know everybody's human. You make errors."

Three weeks later, Hailey got a call from a Raleigh police detective telling her the car was recovered.

When she saw the picture, she couldn't believe it.

"It was just so bizarre. It was like one of those things that you see in a movie. You just don't see it in real life."

But it was real life and so is the dilemma she now finds herself in -- not knowing whether her insurance coverage will leave her with a financial hardship.

"Maybe they come back with a fair market value that's less than what I owe. And there's a $500 deductible so I may still be making payments on a car I no longer have," she said.

Hailey said she's grateful no one was seriously injured in the wreck because it could have been so much worse.

Hailey doesn't have ill will for the driver knowing teenagers can make mistakes raising children of her own.