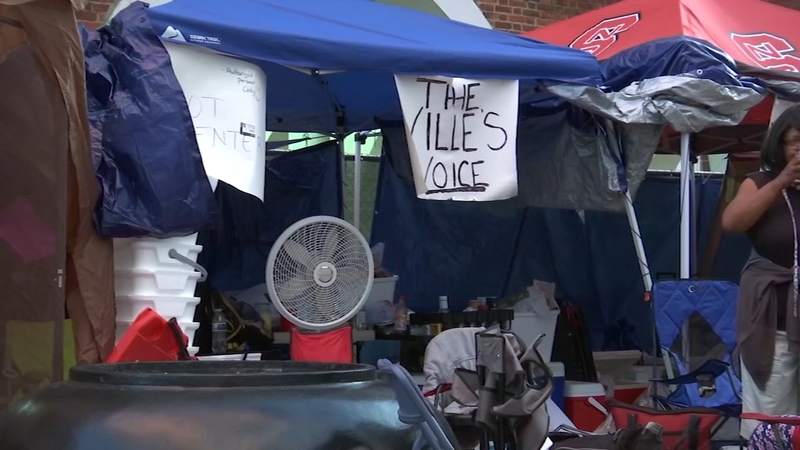 Just last month, a newly created group, known as the Ville's Voice, set up tents and spent nearly a week around the controversial building, demanding police reform and accountability.

On Wednesday evening, Fayetteville city council held a special meeting where they discussed changing the language of an ordinance that prohibits sleeping in parks overnight.

City council accepted the proposed ordinance amendment for Chapter 18, Section 18-19 to include the Market House and city-owned museums. If passed, it would require groups like the Ville's Voice to acquire a permit through the Parks and Recreation Department, if they wanted to conduct a similar demonstration. City Attorney Karen McDonald told city council that this amended ordinance would not affect the homeless community.

The group thinks the city is trying to silence their voices. Rakeem Jones, one of the organizers, says "I feel like it's, more so, in response to what we did".

#NEW: The recent demonstrations at the Market House have prompted city council to consider new restrictions on people sleeping on certain public property. We'll tell you what ordinance they're trying to amend at 11 on @ABC11_WTVD @CityOfFayNC pic.twitter.com/mthxc53Noh

While the Ville camped out around the building, city leaders and local business owners shared their concerns about the potential risk to public safety, since many demonstrators were camped out right next to a busy roundabout.


"As we've seen with the Market House, we didn't break any laws, we stayed perfectly legal. There's no incidents, there's no violence or anything else," Jones added.
Jones tells ABC11 he's more than willing to purchase a permit, but they have the money for lawyers and bonds, if push came to shove.

"We just want to avoid all of that and just work with them and, uh, in a capacity where we can work in office where we don't have to be in the streets," Jones emphasized.

After the Ville decided to leave the site in July, they gave city leaders 60 days to meet their six demands; otherwise, they would return to the historical building. Jones adds they have no problem finding another location to let their voices be heard.