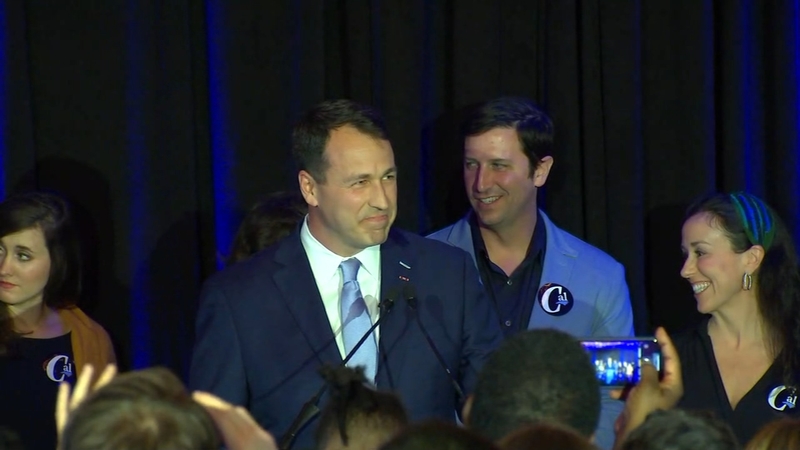 Cunningham was endorsed by the Democratic Senatorial Campaign Committee and benefited from more than $9 million in outside spending from two super PACs.

"Congratulations to Cal Cunningham, a decorated veteran, business leader, and former legislator who has the experience and drive to defeat Thom Tillis. Cal has served his country and his state for his entire career and we know that he will be an independent voice for North Carolina who will never stop fighting for our military families, better health care, and stronger public schools.

"North Carolina is ready for new leadership in Washington. Senator Thom Tillis is one of the most vulnerable senators in the country, a weak, Washington politician who we cannot trust to put the interests of our state before his own. The road to a U.S. Senate majority runs through North Carolina, and Democrats are ready to change power in Washington."

Unaffiliated voter Bob De Andrade, 64, of Durham, said he voted Tuesday for Cunningham because he believes he would stand up to Donald Trump or whoever is president.

"I thought he was offering the change I'd like to see," said De Andrade, a tour bus driver. "He's not accepting the status quo of allowing the president to run roughshod over the institutions."

Some of the super PAC ads backing Cunningham sought to counter pro-Smith commercials paid for by an unusual source: a group linked to Senate Majority Leader Mitch McConnell. The GOP effort was designed to weaken Cunningham among progressive voters by pointing out he didn't support the Green New Deal or Medicaid for All. The campaign of Smith, who backs those policies, still blasted the interference, adding that black women "are not chess pawns for D.C. committees." Smith would have become the first African American female senator from the South if elected in November.

Meanwhile, Tillis was ultimately spared from an expensive race against well-funded challengers who either didn't run or pulled out. Questions about Tillis' loyalty to President Donald Trump by hardline Republicans have subsided in recent months, particularly during Trump's impeachment.

Tillis "had made some stumbles" previously when it came to his allegiance to Trump, retired Highway Patrol leader Sidney Cummings, 77, said after voting in Cary, but "he's better than a Democrat."

"I am honored to have earned the Republican nomination tonight, and pledge to work as hard as I can to hold this seat and get President Trump re-elected so that we can continue to partner on wins for North Carolinians of all backgrounds and political affiliations," Tillis said in a statement, "This race will present a clear contrast between me and my opponent, Cal Cunningham. I want to keep working with President Trump to create jobs, boost wages, secure winning trade deals, rebuild our military, improve health care for veterans, combat sanctuary cities, and confirm well-qualified judges to the federal bench. My opponent, on the other hand, spent his primary embracing far-left positions like removing President Trump from office, repealing the 2017 tax cuts, enabling sanctuary cities, opposing America-First trade policies, and criticizing the killing of a murderous terrorist from Iran."

Three North Carolina members of Congress with challengers from their own party this year all won primaries on Tuesday.

Rep. David Price defeated Daniel Lockwood in the Democratic Party's 4th Congressional District primary and will face Tuesday's Republican primary winner. Price first went to Congress in 1987 and has served continuously except for two years in the mid-1990s.

Rep. Patrick McHenry won his Republican primary in the 10th District over David L. Johnson and Ralf Walters and will face Democrat David Parker in the fall. McHenry was first elected to Congress in 2004, rising to the post of chief deputy whip when Republicans recently held the U.S. House majority.

Democratic Rep. Alma Adams defeated Keith E. Credle in her 12th District primary and will take on Republican Bill Brewster in the fall. Adams is seeking her fourth full term in Congress. She had been in the state House for 20 years before her 2014 congressional election.