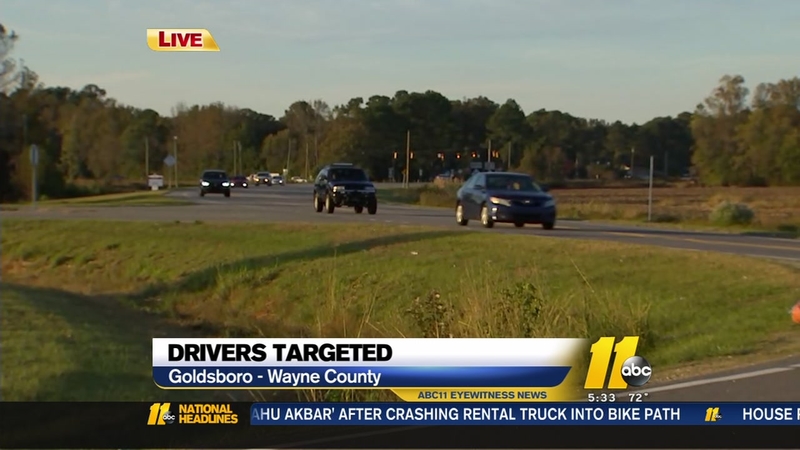 Drivers being targeted by thrown objects in Wayne County

GOLDSBORO, North Carolina (WTVD) -- A warning has been issued for drivers in Wayne County after several vehicles were targeted along Highway 111 near Goldsboro.

The Wayne County Sheriff's Office is investigating a series of incidents involving objects being thrown from moving vehicles at oncoming traffic.

The attacks are occurring along NC Highway 111 South Highway, from Dollard Town Road to Indian Springs Road, according to authorities. At least seven vehicles have been hit with objects, including one that resulted in a driver being taken to the hospital.

10-25-2017 - 12:30 a.m. - 1:30 a.m.: Three vehicles traveling on NC 111 Hwy South were struck with thrown objects. One victim, whose car was struck twice, stated that she saw a white car, being followed by a pickup, both times that her vehicle was struck, and believes both vehicles are involved.

10-31-2017 - 2:50 a.m.: Tractor trailer driver reported that occupants of a dark-colored passenger vehicle threw something at his truck, which struck his windshield and knocked out his driver's side window. This was the most serious incident which sent the driver to the hospital with non-life threatening injuries, which included cuts to his face and glass in his eyes.