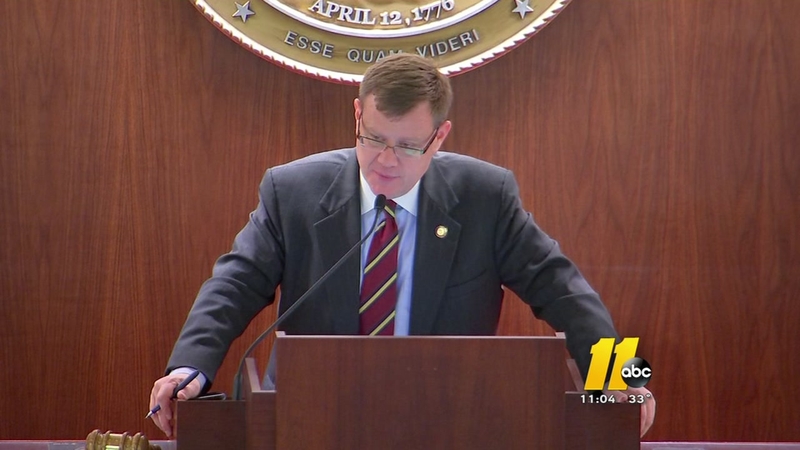 RALEIGH (WTVD) -- NC House Speaker Tim Moore is surveying his Republican colleagues to see whether they want to come back to Raleigh for another special session, this time, to address Charlotte's newly-expanded nondiscrimination ordinance.

In a 7-4 vote Monday, the Charlotte City Council passed the ordinance which, among other expanded protections for the LGBT community, allows transgender people to choose between men's and women's public bathrooms, depending on the gender they identify with.

Less than a week after wrapping a special legislative session to redesign the state's congressional district maps, lawmakers could be headed back to Jones Street before the April 25 scheduled short session.

"The Speaker is currently gauging interest among House Republicans on whether to call a special session to address the Charlotte ordinance that allows residents to use either a men's or women's bathroom. Without action, the ordinance would go into effect on April 1 - several weeks before the General Assembly convenes for short session."

A special session of the legislature can cost taxpayers up to about $42,000 a day.

"I do think it's worth it," said Elliot Engstrom, lead counsel at the Civitas Institute's Center for Law and Freedom. "I'm not even sure the city of Charlotte has the authority to do this, anyways."

Engstrom echoes sentiments Moore shared in a statement after the city council's vote. It read in part, "This ordinance is impossible to regulate as intended, and creates undue regulatory burdens on private businesses."

Rep. Paul Stam, Wake, said Charlotte city leaders overstepped their bounds when including a provision that would require businesses contracting with the city to adopt the same nondiscrimination standards.

"It's trying to commandeer the private sector to accomplish the social goals of a few extremists," said Stam.

Ahead of Monday's vote, Gov. Pat McCrory warned city councilmembers they could expect immediate legislative intervention by the state, should they pass the expanded ordinance.

Instead of waiting for a three-fifth's majority of House members to agree to a special session, McCrory could call the legislature back on his own. ABC11's calls to the governor's press office Friday were not immediately returned.

On Monday, McCrory issued a statement to ABC11:

"My preference would be to wait, from a cost standpoint, to have a bill introduced as soon as the legislature returns for its short session in April. I think it can be addressed very quickly because we need to respect the privacy of women, children and men in a very private place; that's in our restrooms and our locker rooms."

Those who support Charlotte's move to expand LGBT protections were quick to respond Friday.

Long referred to the ordinance as the next front of the civil rights movement, and a measure other cities across the state are likely to adopt.

He's encouraging supporters to contact their representatives and ask them not to support a special session.

"The (short) session will be starting just around the corner," Long said. "Why do you need to spend taxpayer money, take more time to do this? We already don't have money for infrastructure and teachers are struggling."