WPVI
PHILADELPHIA -- Based on Chopper 6 video, Action News crews at the scenes, and police reports, here is a timeline of events surrounding a stolen ambulance and the nearly 90-minute chase through Northeast Philadelphia on Friday night.

Fire rescue units respond to the Roosevelt Inn on the 7600 block of Roosevelt Boulevard for a domestic disturbance.

Philadelphia police arrive on the scene. The suspect jumps into the medics' ambulance and starts driving toward a 2nd district police officer. 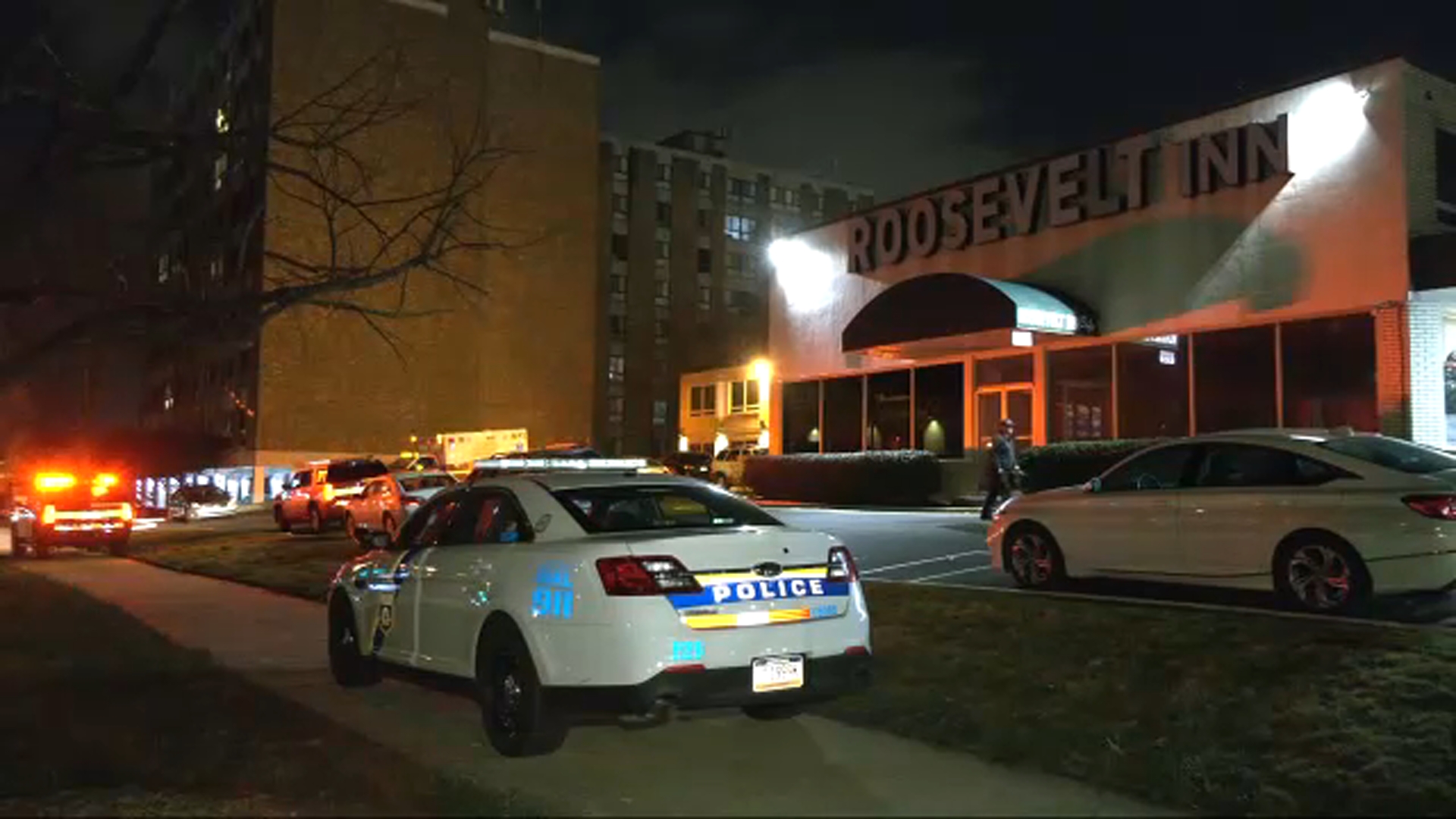 The officer opens fire approximately four times into the ambulance. The suspect is hit twice in the leg and once in the side, police say.

The officer is hit by the ambulance. He is taken to Nazareth Hospital with injuries that are not life threatening, police say.

A chase through Northeast Philadelphia begins, it will last for over an hour. The suspect drives between 10 mph and 25 mph throughout the chase, police say.

Chopper 6 begins following the chase as the suspect drives through the forecourt of the Philly Gas station at Roosevelt Boulevard and Cottman Avenue.

A suspect in a stolen ambulance plowed into a gas station during a chase in Philadelphia. 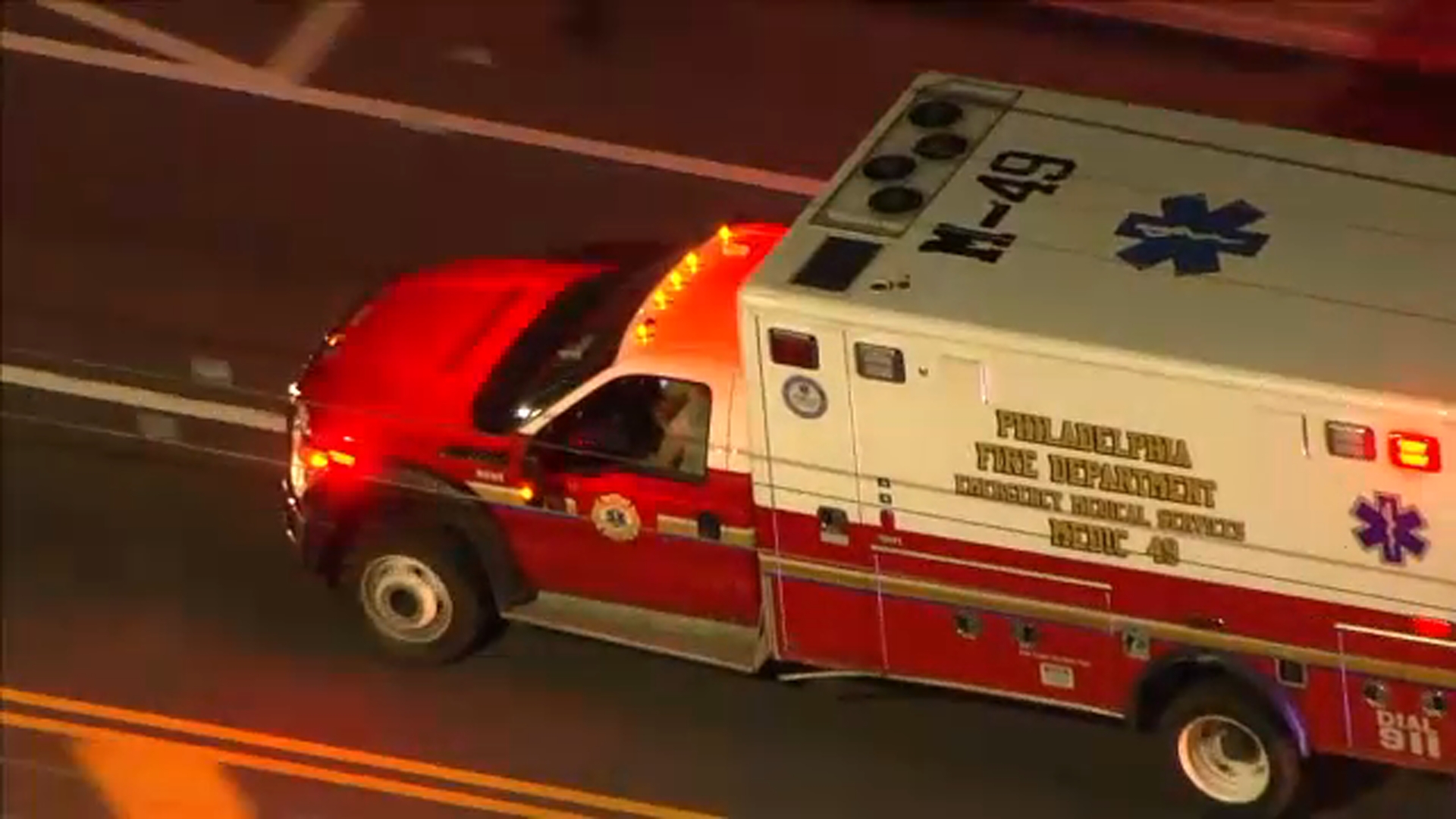 The suspect can be seen in the driver's seat of the ambulance, with the vehicle's lights flashing, as the chase continues. 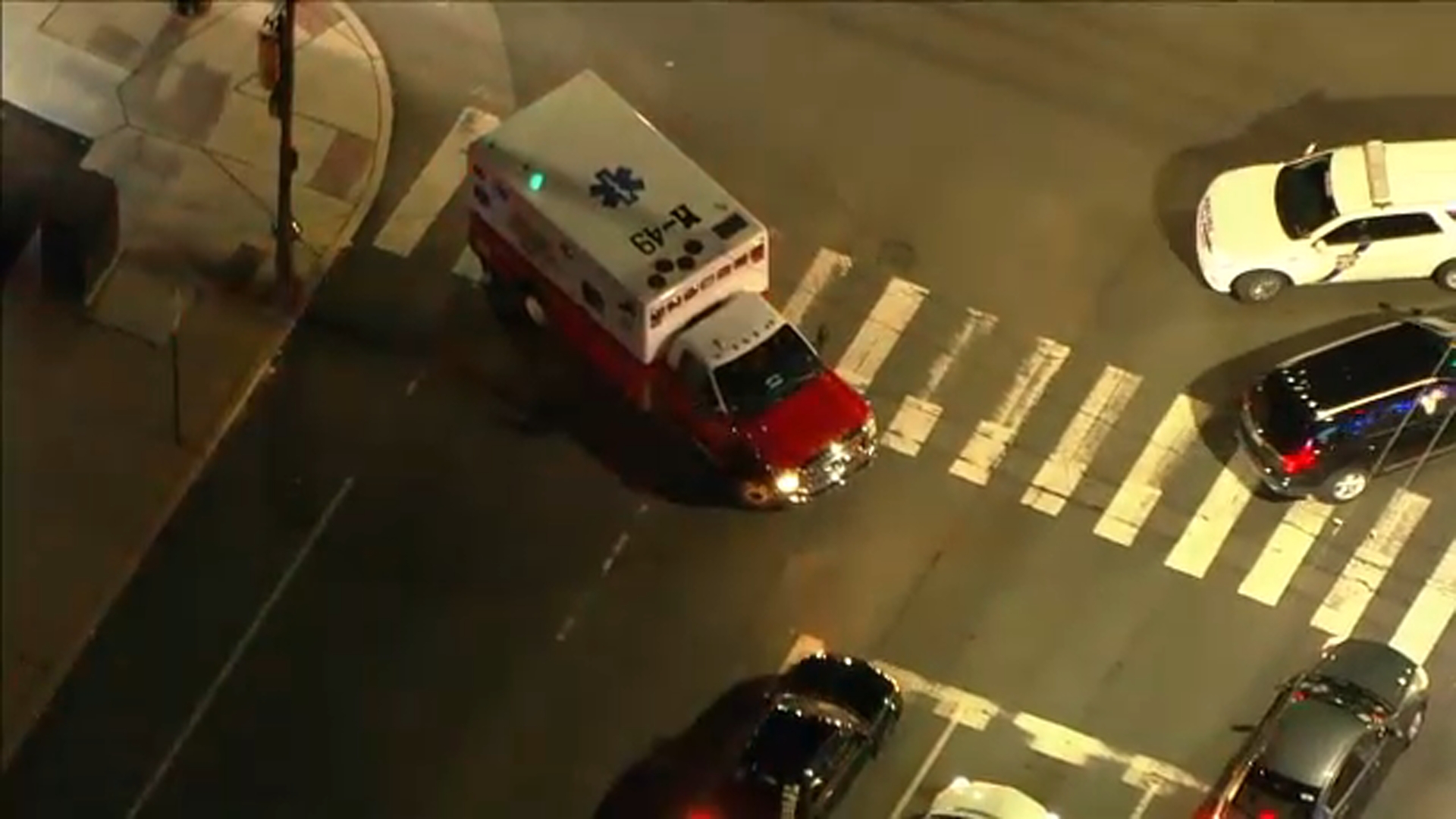 The suspect tries to turn the stolen ambulance around but appears to be cornered. However, he is able to turn, maneuver away, and drive on. 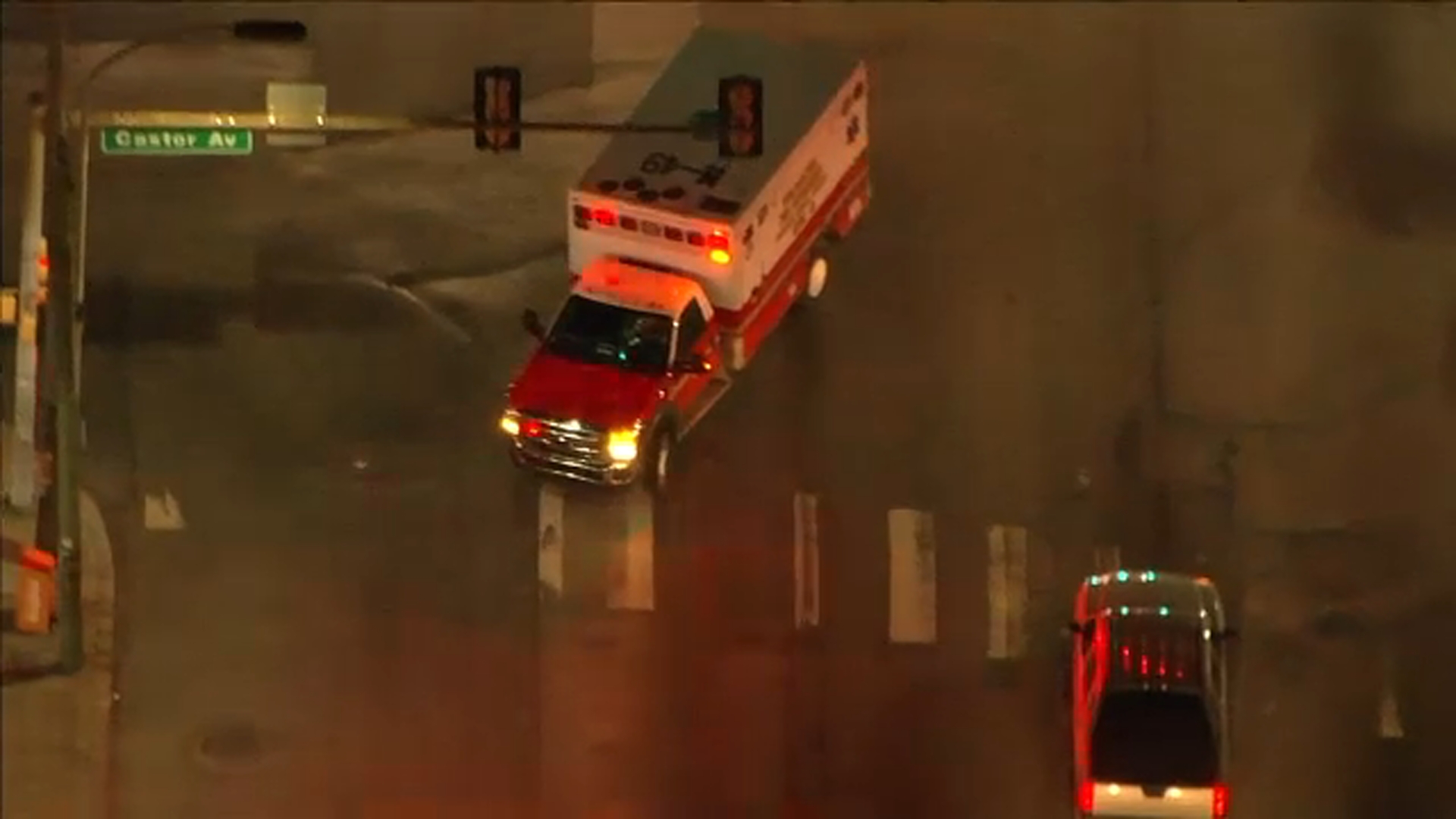 The suspect drives pasts the intersection of Cottman and Castor avenues.

He turns near the Exxon station at Cottman and Bustleton avenues. 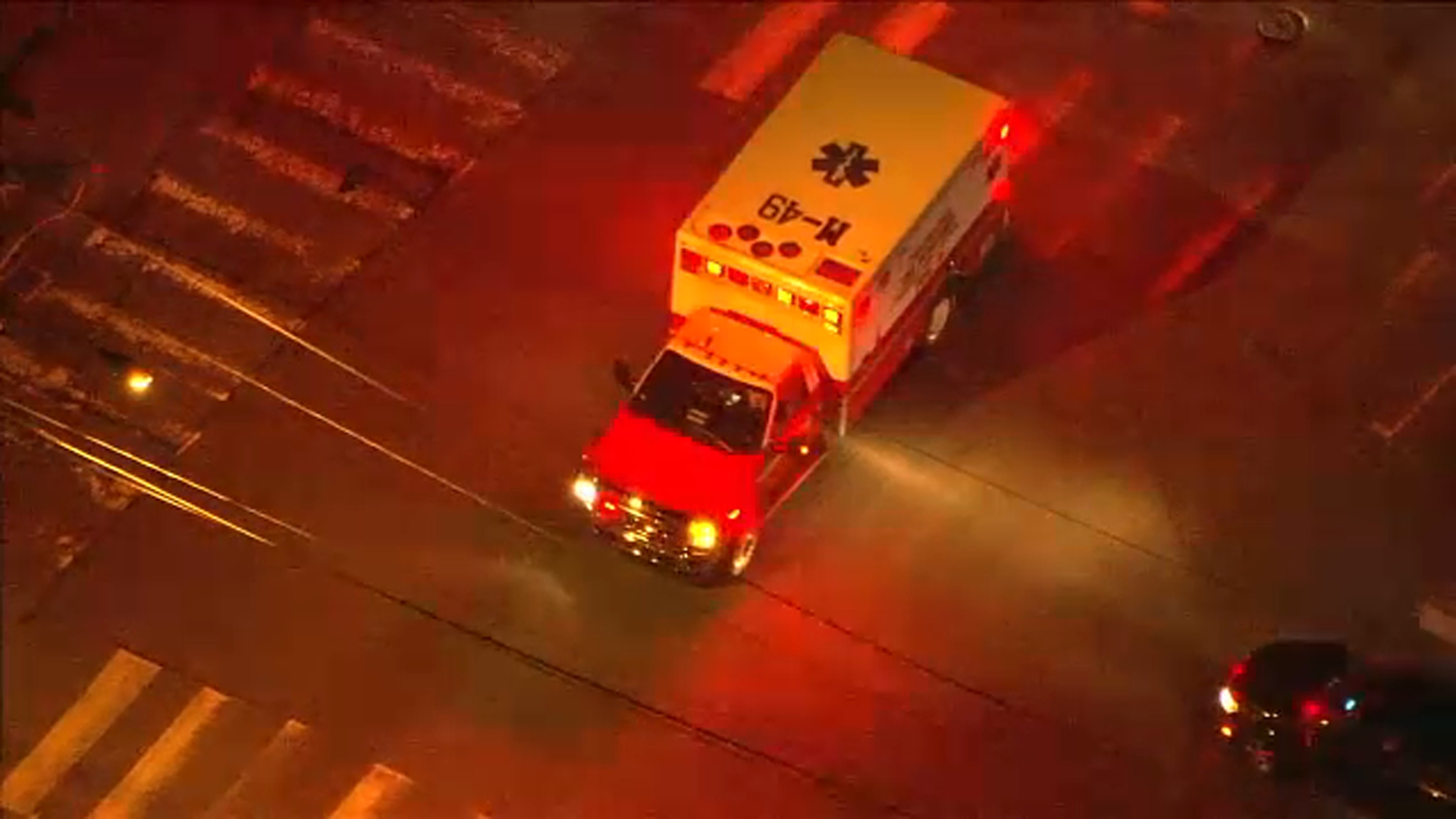 The ambulance stops for a few seconds while driving on Loretto Avenue as police vehicles look on. The suspect has one hand on the wheel and one toward the driver's side window. He places both hands on the wheel as he takes off again.

The ambulance turns on Longshore Avenue.

The suspect makes a right onto Bustleton Avenue and then a left onto Harbison Avenue.

The ambulance turns onto Battersby Street.

The driver turns onto Benner Street and then to Hawthorne Street.

The ambulance turns onto Comly Street, then Duffield Street, and Frankford Avenue.

Police are chasing a stolen ambulance through the streets of Philadelphia on Friday night.

The suspect pulls into a parking lot for the Burger King and Lube Master Car Care Center on Frankford Avenue just before Devereaux Avenue. The driver parks in a spot with the front wheels on top of the concrete bumper.

The driver opens the door and speaks. Two officers come up to the driver, who then slams the door, and takes off.

Four patrol vehicles are blocking the exit of the parking lot. The ambulance smashes into the front end of one of the police cars, and the side of an SUV. When he appears to be sandwiched between the two vehicles, more officers approach.

The suspect opens his driver's side door, but then plows through the blocking police vehicles to turn back on Frankford Avenue. The chase continues. 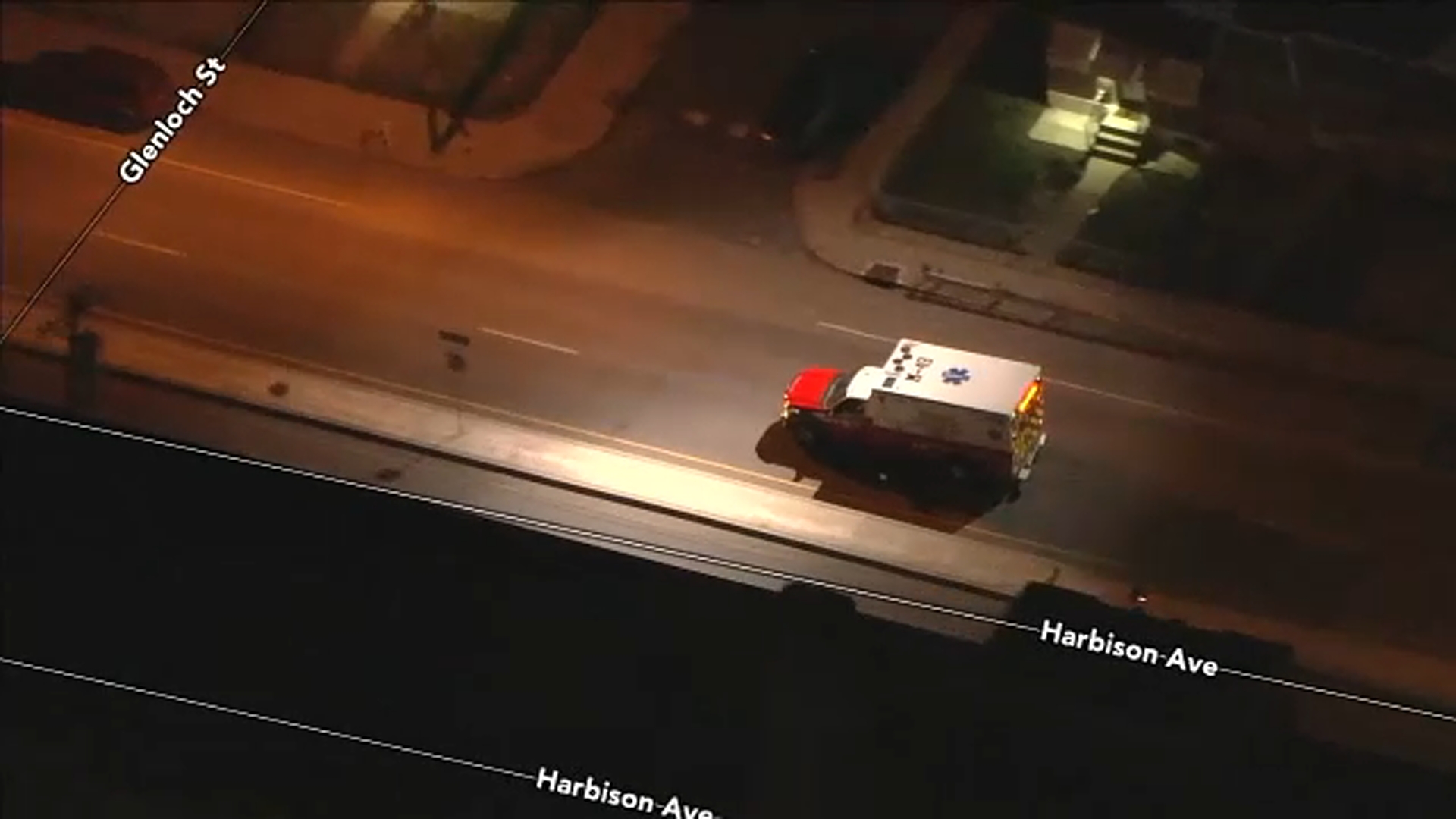 The suspect continues to make his way through Northeast Philadelphia traveling on Harbison Avenue.

A tow truck driver, with lights flashing, pulls in front of the ambulance on Harbison Avenue near Tulip Street. The suspect swerves around the truck. Both move quickly to miss another vehicle. This separates the tow truck and the ambulance between a concrete median.

A tow truck driver tried to stop a police chase suspect in Philadelphia on February 28, 2020.

The suspect is forced to cross over the median after traffic is backed up due to a red light. This brings the ambulance back on the same side as the tow truck.

The ambulance turns the wrong way onto an empty one-way street before returning to Northeast Philadelphia Friday night traffic. The tow truck follows.

The tow truck swerves in front of the ambulance, but both are yet again separated by stanchions 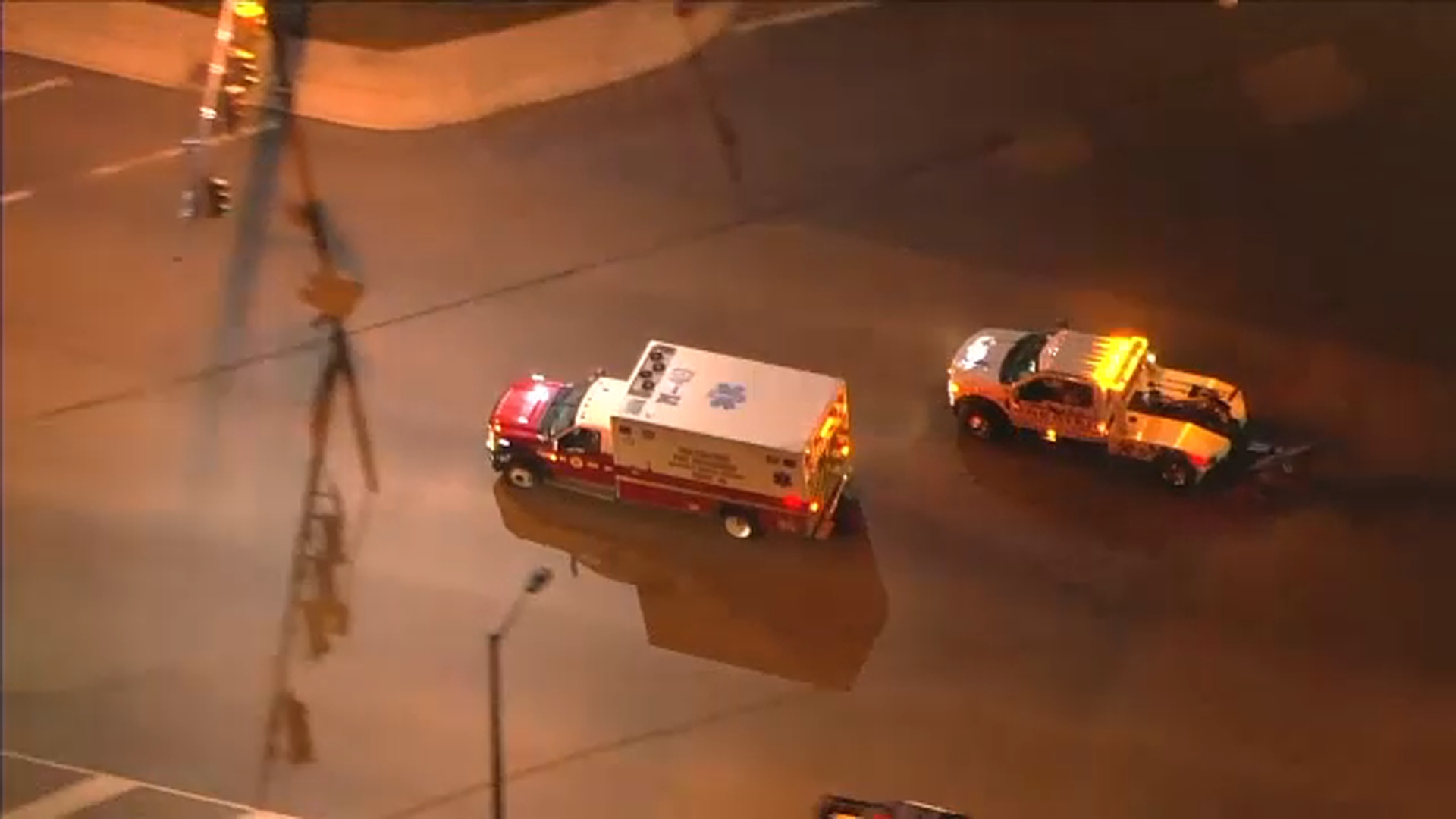 The tow truck returns into Chopper 6's view right behind the stolen ambulance. However, the tow truck makes a turn, but the ambulance driver keeps going straight ahead. 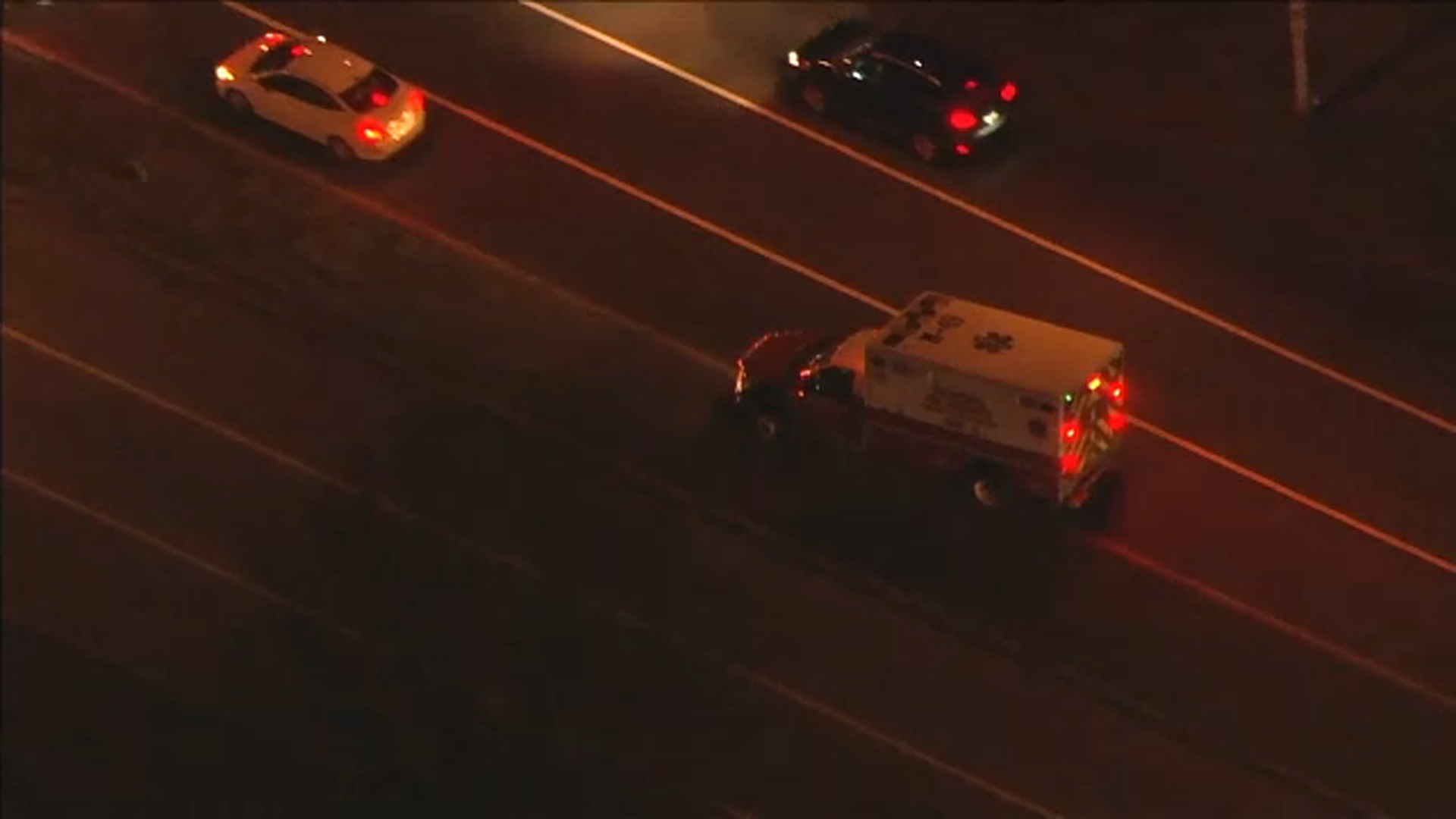 To avoid traffic, the suspect drives onto a grassy divider on Roosevelt Boulevard.

The driver squeezes between two cars, scraping the side of one, on Roosevelt Boulevard just before Ryan Avenue/Borbeck Avenue. 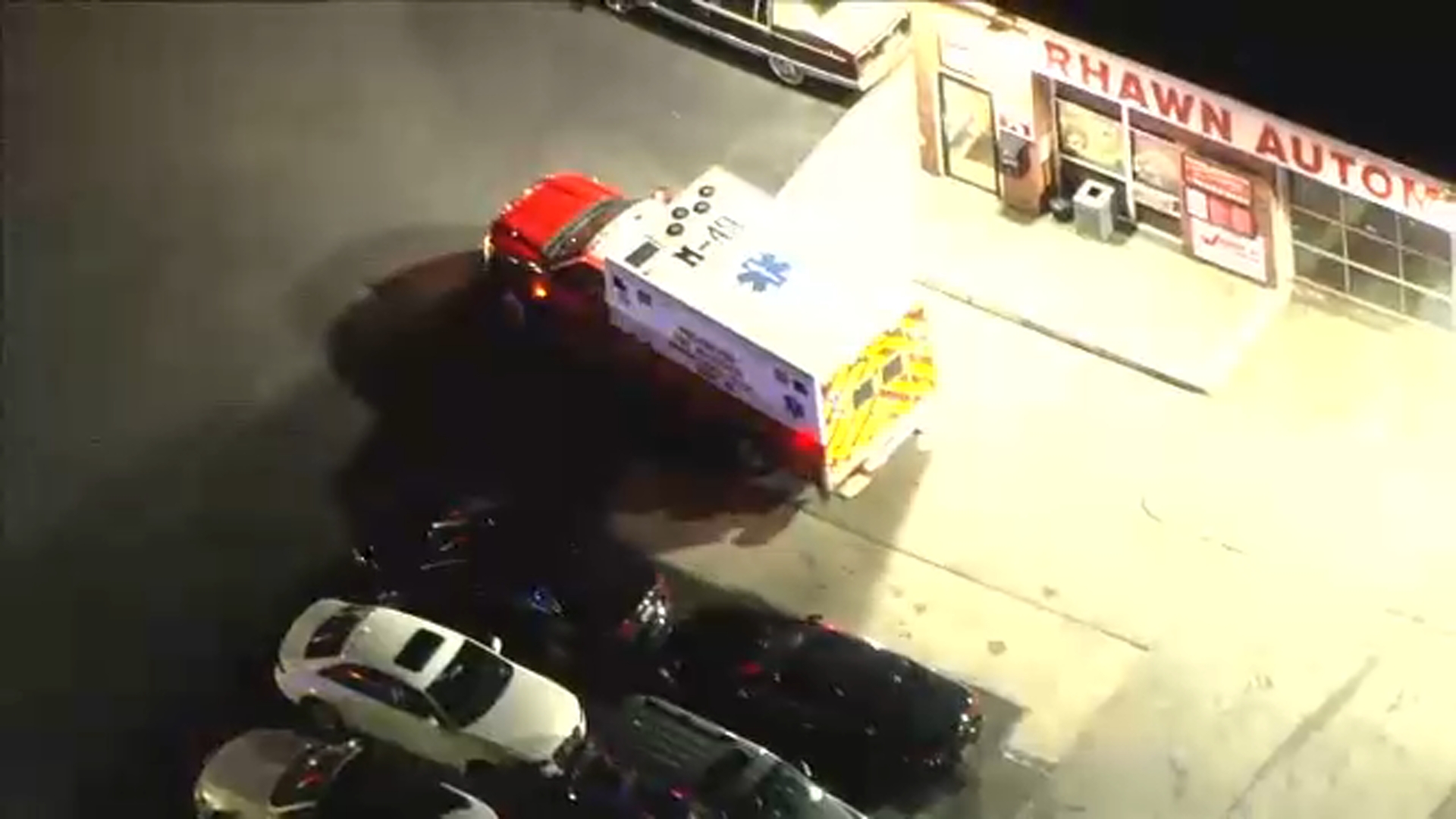 The suspect drives the ambulance into the parking lot of Rhawn Automotive at 7959 Roosevelt Boulevard.

Action News reporter Maggie Kent is in the Action News Van as the suspect drives into the parking lot.

CAUGHT IN THE AMBULANCE CHASE: We were waiting at a red light at Rhawn and the Boulevard when the stolen ambulance came right behind us
@6abc pic.twitter.com/YJCONsagd7

He exits the parking lot, crosses over Rhawn Street, then drives onto the sidewalk near the Checkers fast food restaurant. He then gets back on Roosevelt Boulevard.

The ambulance turns on Holme Avenue.

The suspect continues his trek through Northeast Philadelphia with the chase now reaching over an hour. 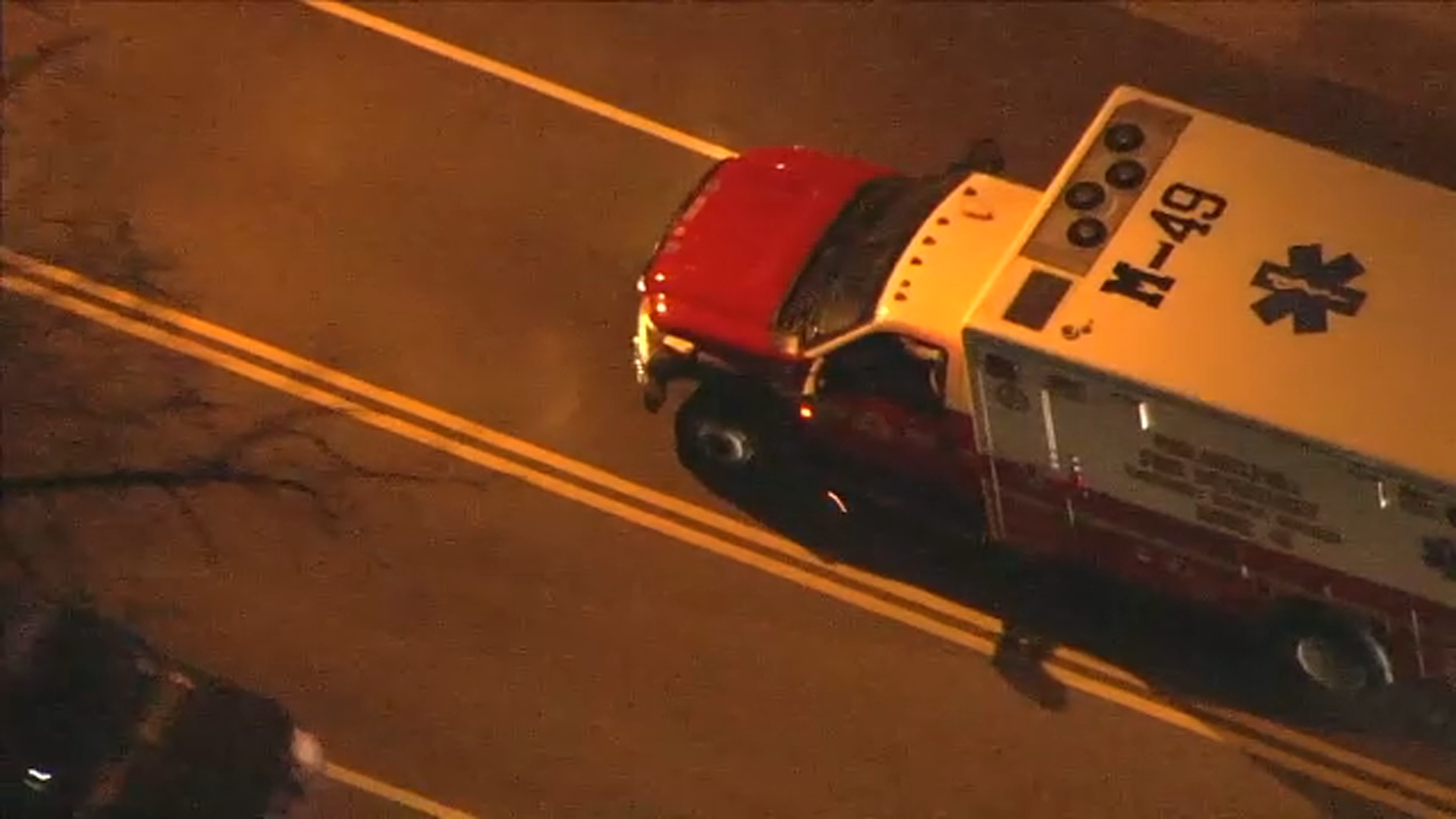 Sparks can be seen coming from the front wheels of the ambulance. A closer view from Chopper 6 shows the ambulance missing its front left tire. The right tire has been torn apart, but still remains on the wheel.

The ambulance continues the wrong way down a one-way street.

The right tire hangs on. 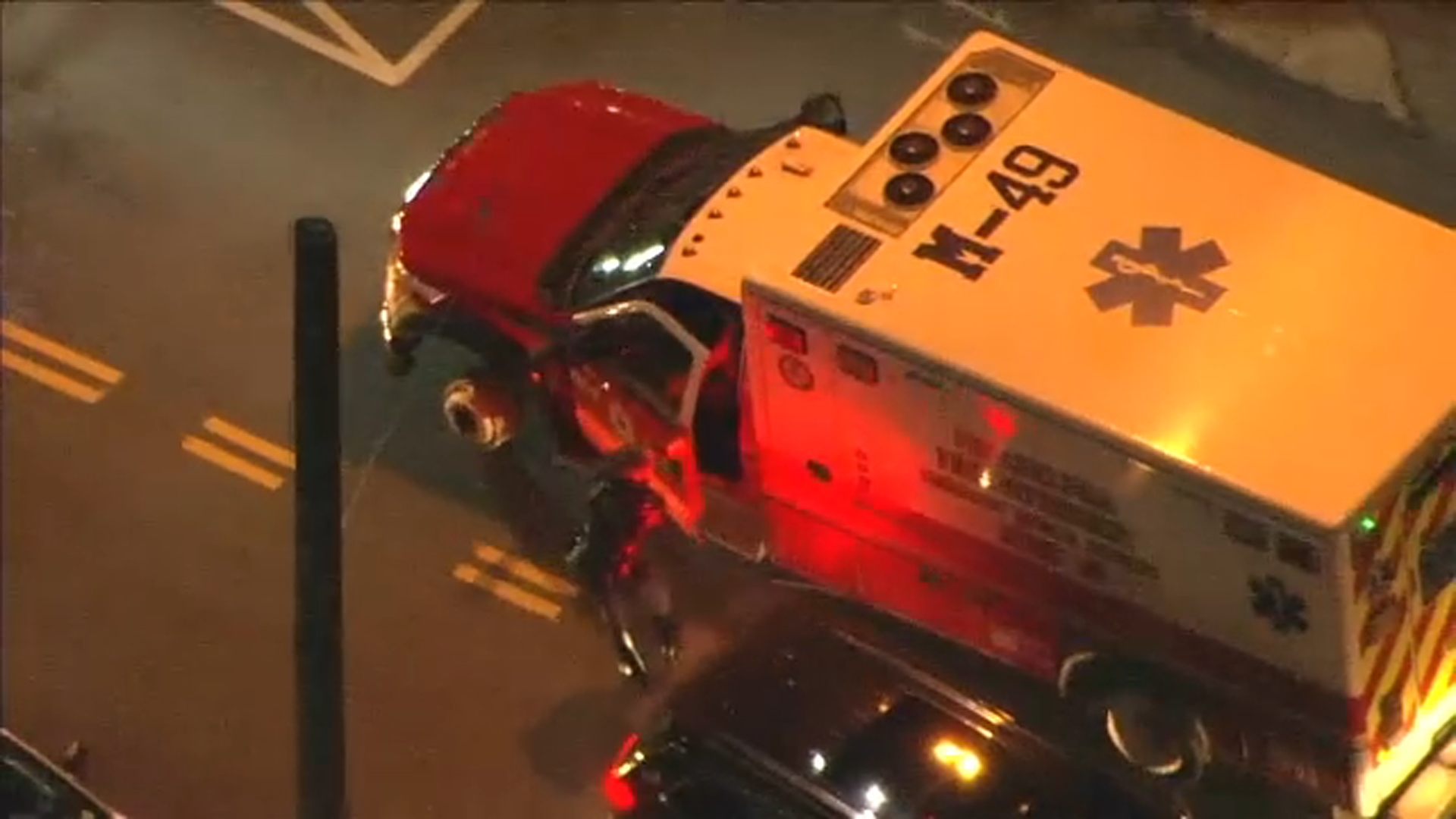 The suspect stops and opens the driver's side door. He looks out. He continues to drive while holding the door open with one hand and having the other on the steering wheel.

The ambulance once again is driving down the wrong way on a one-way street with police right on its tail. 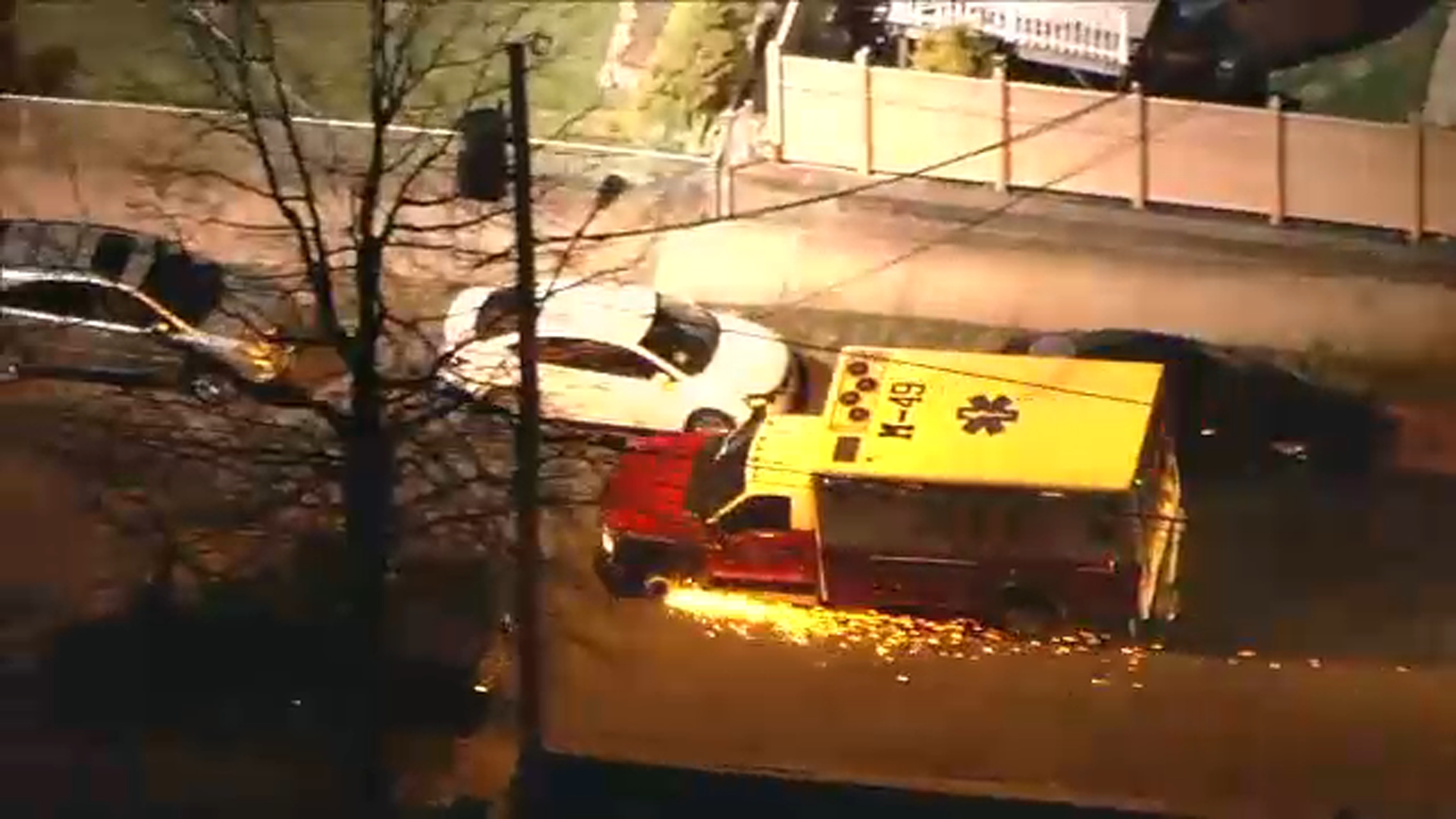 Even more sparks are seen coming from the front wheel of the ambulance.

The suspect pulls onto the front lawn of a home on the 2700 block of Tolbut Street. Police surround the vehicle.

Two officers pull the man, who is only wearing boxer shorts and appears to be bleeding from his leg, out of the ambulance and onto the ground. One officer stands on the suspect as the others place him under arrest. More law enforcement officers crowd around the scene.

The suspect has his hands tied and is escorted by an officer.

Action News was there as police arrested a stolen ambulance suspect on Friday night.

The officer and the suspect make their way to a police van. The suspect is placed into the back of the van. He is taken to the hospital for treatment.

Philadelphia police hold a press conference after a chase involving a stolen ambulance on February 28, 2020.