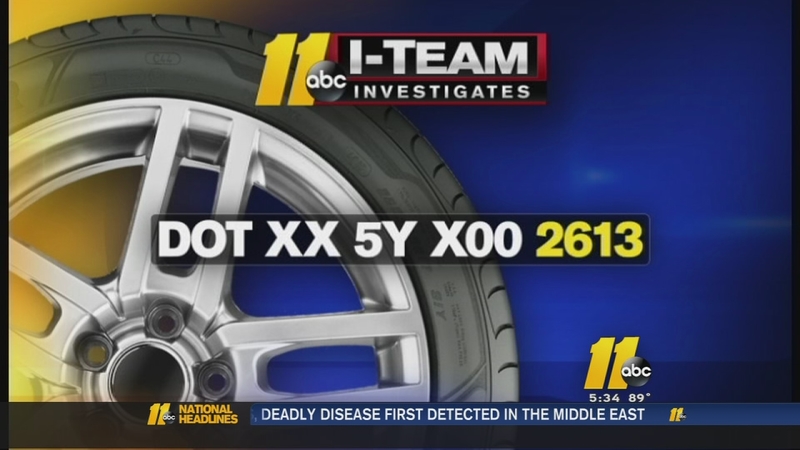 RALEIGH (WTVD) -- The ABC11 I-Team is revealing a little known secret about your tires. It is information that could save your life before you hit the road this summer.

Millions of aging and recalled tires are sold every year. You might buy these tires, and not even know it. That's because consumer advocates say the recall system is broken, and trying to figure out how old your tires are is difficult.

Accident victim Carolyne Thorne is on a long road to recovery.

"He said, 'I am afraid that you will be paralyzed. You will never walk again,' and that was like a death sentence to me," said Thorne. "It was like dying."

Thorne has several therapy sessions every week to recover what she lost 10 years ago on a stretch of Interstate 85 heading to Georgia.

"I heard a loud noise and then the truck started swerving," said Thorne.

Her SUV rolled several times after a faulty tire shredded.

Thorne didn't know the tire that caused the accident had been recalled two years earlier. It was the spare tire that came with her SUV when she bought it.

"I was mad as hell that they put me in this chair," said Thorne.

"I'm blessed," said accident victim Kristen Rose. "It's by the grace of God that I am still here. It's a miracle."

Rose thinks it's a miracle that she survived an accident in her Ford Explorer.

"I just remember driving like normal, and the next thing I know I hear a loud pop," said Rose.

Her car began swaying, and then it flipped.  She was thrown out of the vehicle.

The accident put the brakes on her career as a model. She had severe burns, hip and pelvic injuries. Her head had a four-inch long gash, and her life as a mother to her 6-year-old son is limited.

"I can't even get him a juice or whatever," said Rose.

Rose later learned through a lawyer that a 15-year-old tire on the SUV was recalled more than a decade before the crash.

"In a matter of seconds, your whole life is completely torn upside down," said Rose.

"When you go to a tire shop today and you have your tires inspected, there is no way that shop can examine the tire at a glance and determine whether it's part of a recall," said consumer advocate Sean Kane. "There's no database.  There's no system."

Kane runs a private auto safety research firm. He's been at the forefront of petitioning the government to provide a tire database for consumers, tire retailers and car dealers.

"The whole system that was put in place to ensure that recalled tires get taken off of vehicles and replaced is based on a 40-year system using the tire identification number, and a registration card that is supposed to be given to you by the selling dealer or they register you automatically," said Kane.

Kane says a recent study shows only 30-percent of tires are actually registered, which means most tires, if they're recalled, can't be traced back to their owners.

The I-Team has learned it's not just undetected recalled tires that can be hazards on the road. Aging tires also contribute to injury and death.

However, vehicle owners are left in the dark when it comes to knowing the true age of their tires.

The I-Team asked drivers in Brier Creek if they knew how old their tires were. In every case, car owners based the age of their tires on when they bought them, not when they were manufactured. When the I-Team told them that date is actually on the tire, no one could find it.

The date is buried in the identification code on the sidewall of the tire. It begins with DOT, which stands for the Department of Transportation, and is followed by about 12 letters and numbers. The four numbers at the end show the week and year that the tire was made.

Matt Wetherington is a defective products attorney who came up with an app to help unscramble the code.

"There are literally millions of vehicles out there with ticking time bomb, in the form of a recall," said Wetherington.

The government studied the longevity of tires, and concluded it's best to check your vehicle's manual and follow the manufacturer's recommendation on when your tires should be replaced -- anywhere from six to 10 years.

While that timeframe is well within safety guidelines, Kane says here in North Carolina it's especially important to replace your tires after about six years because of the hot summers.  The heat degrades the tire, which could cause tragic consequences on the road.

The tire industry trade group, the Rubber Manufacturers Association says its members have a good safety record, and they do not support the idea of tire expiration dates.

It admits the recall system needs improvement, and is working on a way to notify consumers when there is a recall on their tires.

If you want to know more about your own tires, and get the free app called "tire facts," click here.