Could NC begin tolling on every interstate corridor? 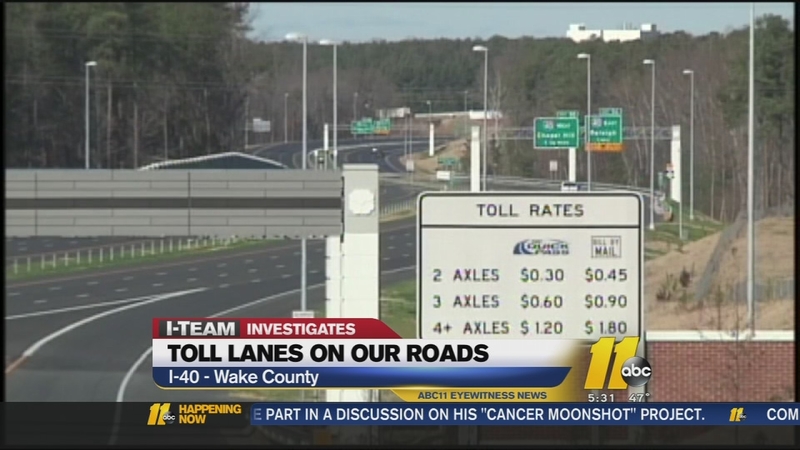 Not all tolls need to be hated.

There are the kind that really can open up roads that get you where you need a little earlier than you might have otherwise. And those are the kind of tolls the state wants to introduce along I-40 and, perhaps, along I-540 north of Raleigh.

They're called managed lanes, where a lane is set aside for drivers who don't mind paying to avoid traffic. The I-Team found plans buried in pages of spreadsheets that show managed lanes already in the works for I-40 from Chapel Hill to Raleigh.

To make that happen, the state would either have to build new lanes or get a federal waiver to turn existing 'general purpose' lanes into toll lanes.

But a former state legislator and current GOP primary challenger to Gov. Pat McCrory, Robert Brawley, says the plans go much farther than that.

Brawley says he started looking into the issue of tolling as a means to pay for the state's transportation needs after the DOT told him about plans for tolls along I-77, near Charlotte.

"I sat down with (then) DOT Secretary Tony Tata and three lawyers. I was informed that l really needed to support the tolls on I-77 because that was the beginning of tolling every interstate corridor in North Carolina," Brawley told the I-Team.

"It seems to me that I-95 was sixth or seventh on the list to toll roads across all interstate corridors in North Carolina," Brawley said.

A spokesperson for the DOT says there are no plans to toll every interstate in North Carolina and wouldn't comment on Brawley's allegations that he was told that by the former Secretary of Transportation.

But despite those assurances and the fact that no such plans appear to exist, Brawley isn't buying it.

"It's my understanding," he said, " that the plan is for managed lanes to be the beginning, ultimately going to full tolled roads to pay for transportation needs in North Carolina."