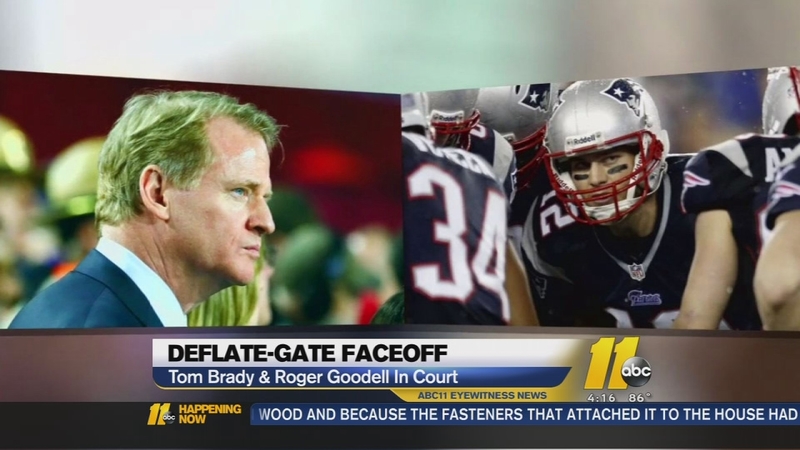 Brady, Goodell in court for Deflategate

NEW YORK -- New England quarterback Tom Brady and NFL Commissioner Roger Goodell arrived at federal court in Lower Manhattan to discuss their case with the judge in his chambers.

The two are set to explain to U.S. District Judge Richard M. Berman why a controversy over underinflated footballs at last season's AFC conference championship game is spilling into a new season. Berman said he wants to learn the status of negotiations. He also asked them to continue negotiating prior to the hearing. Brady was not at Patriots practice.

Goodell and Brady arrived Wednesday morning to vocal reactions from fans, including dozens of Brady supporters, as well as Brady critics wearing deflated footballs on their heads.

Judge was scheduled to meet both in his robing room at 10:30 a.m., following by an 11 a.m. court in session. No settlement is expected today, and the judge is once again expected to forcefully suggest a settlement.

The league asked the judge to declare that it followed its players' contract properly when it punished Brady after Goodell concluded he "knew about, approved of, consented to, and provided inducements and rewards" to support a scheme in which a Patriots' employee deflated balls on game day. Brady insists he knew nothing about it.

At a news conference in Illinois, Goodell said the league plans to cooperate fully with Berman.

In a July 28 decision upholding the suspension, Goodell heavily criticized Brady for having an aide destroy a cellphone containing nearly 10,000 text messages from a four-month stretch including the AFC championship, when the Patriots defeated Indianapolis 45-7, and the Super Bowl, which New England won.

He accused him of obstructing the NFL probe about a controversy that represented "conduct detrimental to the integrity of, and public confidence in, the game of professional football."

In court documents, the union's lawyers said the suspension was unfair and violates the labor contract and complained that it would cause irreparable harm to Brady by forcing him to miss games.