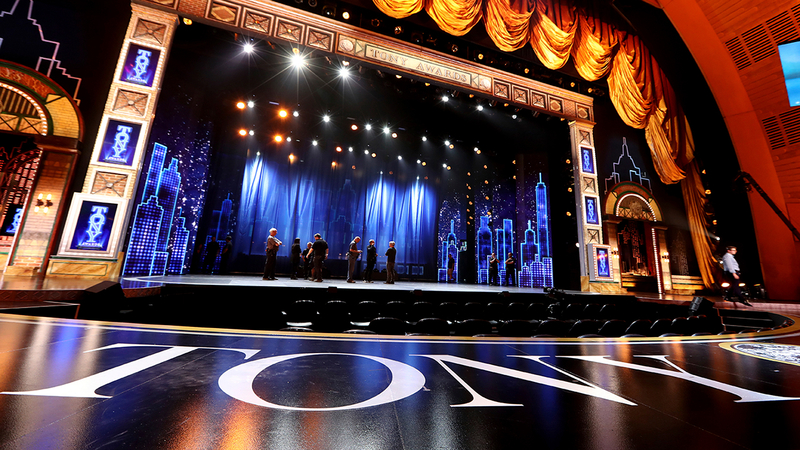 
"I hoped my collaborators would be acknowledged. That actually, in a weird way, was much more exciting to me," Jackson told The Associated Press. "Even if we hadn't gotten any nominations, I would have been disappointed, but I also would have known how powerful the show has been resonating with people."

Playwright Lynn Nottage had two reasons to smile Monday morning: Her book for the Michael Jackson musical "MJ" was nominated for best book and her play "Clyde's" got a nod for best play.

"This has been a historic season for a multitude of reasons. There's been a diversity of Black voices on Broadway in unprecedented numbers. Theater came back after being dark for almost two years and we made art while facing down COVID. And so this feels particularly good given all of the circumstances," Nottage said.

Jesse Tyler Ferguson of "Modern Family" fame got a nomination for "Take Me Out," as did Jesse Williams, the "Grey's Anatomy" star making his Broadway debut. Williams thanked the audience for coming with him on a complex ride.

"This is my first time having this experience in the box, having experience on stage, and that fellowship, that dynamic, that partnership, that reliance we have with each other, that interplay with the audience is critical and something new to me. So it's a thrilling ride," Williams said.

Right behind "A Strange Loop" is a tie with 10 nominations each for "MJ," a bio musical of the King of Pop stuffed with his biggest hits, and "Paradise Square," a musical about Irish immigrants and Black Americans jostling to survive in New York City around the time of the Civil War.

The rest of the best new musical category includes "Six," the corrective feminist take on the six wives of England's Henry VIII, "Girl From the North Country," which uses the songs of Bob Dylan to weave a Depression-era story in the Midwest, and "Mr. Saturday Night," a reworking of Billy Crystal's film about a bitter, old insult comic chasing a last laugh.

Two of the best play nominees are about economics - "Skeleton Crew," Dominique Morisseau's play about blue-collar job insecurity in a Detroit auto stamping plant in 2008, and "The Lehman Trilogy," Stefano Massini's play spanning 150 years about what led to the collapse of financial giant Lehman Brothers.


There's also "Clyde's," Nottage's play about a group of ex-cons trying to restart their lives at a truck stop diner, and "The Minutes," Tracey Letts' depiction of a small-town city council meeting that exposes backstabbing, greed and the larger delusions in American history. "Hangmen," Martin McDonagh's look at an executioner-turned-pub owner forced to grapple with his past when capital punishment is made illegal in the United Kingdom, also earned a best play nod.

One of its actors is Alfie Allen, making his Broadway debut and who got nominated as a featured actor. "I'm out having some pancakes, and I am having a lovely morning," he said. The "Hangmen" ensemble has been welcoming, he said, like a family: "Everybody was just so supportive of each other, and I'm still pinching myself a little bit. It's amazing."

There were four musical revivals during the season, but only three got nominations: "The Music Man" which celebrates America's soul with a traveling con man in a small Iowa town starring Hugh Jackman and Sutton Foster, who each have two Tonys and were each nominated this time as well.

The two other entries in the musical revival category are "Caroline, Or Change," Tony Kushner and Jeanine Tesori's show that explores America's racial, social and economic divisions in 1963 Louisiana, and "Company," Stephen Sondheim's exploration of a single person's conflicted feelings about commitment, this time with a gender-switching of the lead character. That left "Funny Girl," the classic American show starring Beanie Feldstein about the rise of a comic star of the Ziegfeld Follies, out of the running - it got only one nod, for Jared Grimes as best featured actor in a musical.

Grimes, a triple threat whose heroes include Sammy Davis Jr. and Gregory Hines and whose performance includes an electrifying tap dance number, took the traditionally white character Eddie Ryan and remade it as a young Black man.

"Eddie Ryan is a big leap for us in the direction of just understanding that we can be everything and anything. We just need a chance," he said. "I like to think that we're making good strides."

Nominations for best play revival are "Trouble in Mind," Alice Childress' play about a Broadway play that explores the racial divide in the 1950s, "How I Learned to Drive," Vogel's Pulitzer Prize-winning memory play told by the survivor of childhood sexual abuse, starring two nominees: Mary-Louise Parker and David Morse and "American Buffalo," David Mamet's look at loyalty and greed set in a junk shop starring Laurence Fishburne, Darren Criss and Sam Rockwell, the latter the only actor in the play nominated.

The others are "Take Me Out," Richard Greenberg's exploration of what happens when a baseball superstar comes out as gay, and "for colored girls who have considered suicide/when the rainbow is enough," playwright Ntozake Shange's exploration of Black womanhood. That work also made history: Camille A. Brown the first Black woman to direct and choreograph a Broadway play since 1955 earned nominations in both categories.


Brown noted the amazing amount of Black playwrights represented this season and wanted to acknowledge another Black woman in her category: Lileana Blain-Cruz, who was nominated for directing a revival of "The Skin of Our Teeth."

"I'd love to see more Black female directors get opportunities to direct on Broadway, more people of color sharing stories and just for it to continue to expand," she said, on her way to celebrate with her mother.

The season - with a whopping 34 new productions - represents a full return to theaters after nearly two years of a pandemic-mandated shutdown. Many nominees talked about how they had worried theater might never return.

"I'm just so grateful, and also just so happy that Broadway is alive and well," said Jennifer Simard, nominated for "Company." "Because there was a minute there when I wasn't sure we'd be back after the pandemic. So I am so grateful."

Neither Matthew Broderick nor his wife Sarah Jessica Parker earned nominations for a revival of "Plaza Suite," but Patti LuPone got one for "Company" and so did LaChanze for "Trouble in Mind." Ruth Negga earned a nomination for "Macbeth," but her co-star Daniel Craig came up empty. Tony-winner Phylicia Rashad got her first nomination in more than 15 years with "Skeleton Crew" and "Saturday Night Live" veteran Rachel Dratch earned a Tony nod in the feminist farce "POTUS." One eye-raising decision was not to hand Katrina Lenk a nod for her work in "Company."

The nominees for best actress in a musical nominees are Sharon D Clarke of "Caroline, Or Change," Foster in "The Music Man," Joaquina Kalukango for "Paradise Square," Carmen Cusack in "Flying Over Sunset" and Mare Winningham in "Girl From the North Country."

Joining Spivey, Jackman and McClure in the best actor in a musical category are Crystal for "Mr. Saturday Night" and Myles Frost, whose King of Pop in "MJ" was a moonwalking triumph. The best actor in a play category is dominated by the three leads in "The Lehman Trilogy" - Simon Russell Beale, Adam Godley and Adrian Lester. The rest are Morse, Rockwell, Ruben Santiago-Hudson in "Lackawanna Blues" and David Threlfall from "Hangmen."