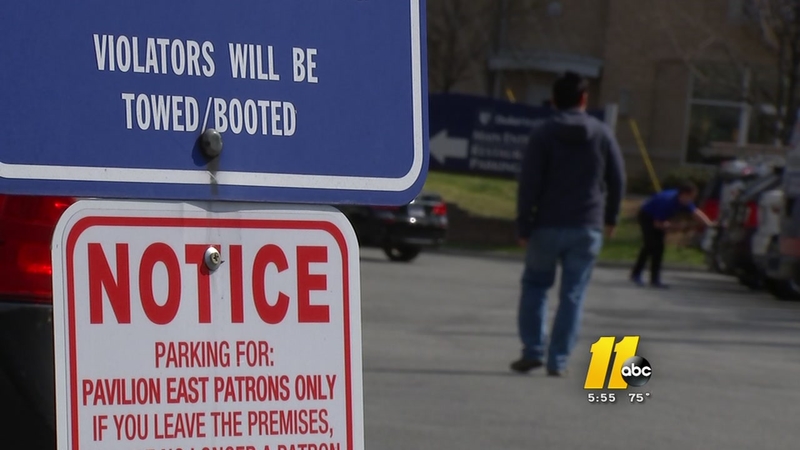 DURHAM, North Carolina (WTVD) -- Has your car even been wrongfully towed? A Durham man says it happened to him while he was at the Dunkin Donuts in the Pavilion East shopping plaza off Erwin Road in Durham.

Jerry Love is a regular customer at the Dunkin Donuts. He spends a good amount of time in the restaurant, and says he has never had a problem until recently. When he was leaving the Dunkin Donuts on March 1, his car was gone.

He quickly realized that it had been towed. There are signs all around the Pavilion East parking lots letting customers know if they leave the premises, vehicles will be towed or booted.

Jerry explained he never left the Dunkin Donuts so he didn't understand why it was towed. Chandler's Towing is the company that towed Jerry's car.

There are signs all around the Pavilion East parking lots

"They said I left the premises, that I walked off the premise," Jerry said he was told.

There are signs all around the Pavilion East parking lots

Jerry said that never happened, and Chandler's wasn't budging so Jerry had to pay $200 to get his car back.

Jerry continued to try to prove his case and even got Dunkin Donuts involved. The General Manager of the restaurant wrote a letter for Jerry.

The letter stated in reviewing their security video, it shows that Jerry was present in their restaurant while his car was towed.

A rep with Chandler's Towing gave me the contact information for the property management company, Ram Realty Services.

Before I called them, I asked Jerry to get in touch with the property management company. He said he sent several text messages and called once, but did not get any response back. I then reached out to the Ram Realty Services.

A representative with the company, Kimberly Armstrong, said she would review the case. She said she went to the Dunkin Donuts to view the video tape.

In an email she wrote, "I was able to view Mr. Love in Dunkin Donuts as per the timeline outlined in the letter from Dunkin Donuts. I was also able to view myself on the video coming into the store and looking for Mr. Love and while I was in the space, he was in the restroom. I incorrectly assumed Mr. Love had exited the property. It is a rare instance that we make a mistake like this I take full responsibility as it was my error. I am asking the Owner of Chandler's Towing to please make a check payable to Mr. Love for the reimbursement of the car towing. We appreciate you bringing this to our attention and as previously advised, had Mr. Love reached out to us, we would have been happy to resolve in the same manner."

Jerry was able to pick up his $200 refund check from Chandler's Towing, and said he is glad he kept fighting.

"I just wanted to get justice and get my refund. I also wanted to hopefully help prevent it from happening to someone in the future," he added.