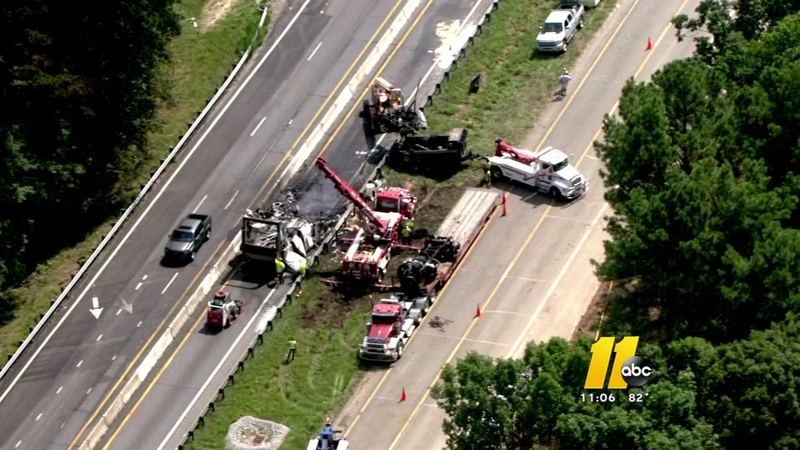 Deadly crash closed stretch of I-85

WARREN COUNTY, North Carolina (WTVD) -- One person was killed in a multi-vehicle crash that shut down I-85 in Warren County for hours on Friday.

The Highway Patrol said three motor vehicles and a tractor-trailer had slowed for traffic but a second tractor-trailer failed to reduce speed and rear-ended the first tractor-trailer, catching fire. That truck was then struck from behind by another motorist who also didn't slow in time. The second truck was incinerated and the driver died from his injuries, troopers said.

The first 18-wheeler was pushed into the three vehicles in front. Another vehicle, behind the second tractor-trailer, didn't slow in time and rear-ended the second big rig.

A crash Friday affected traffic on I-85 in Warren County.

The victim's identity has not been released pending notification of family.

All lanes of I-85 South reopened about 5:30 p.m. in Warren County following the deadly crash near Exit 223.

Officials estimated the interstate would be closed until 7 p.m. for the southbound lanes, but they reopened around 5:30 p.m. An eyewitness told ABC11 that the incident involved a tractor trailer.

Message boards located along I-85 South in South Hill at U.S. 58, at the I-85/I-40 split near Hillsborough, and at the Durham Freeway directed drivers to alternate routes.

PROBLEMS ON I-85 SOUTH

Another snarl on I-85 toward Charlotte has cleared.

The interstate was closed earlier Friday but the roadway reopened near China Grove at Exit 70, Webb Road, because of a crash.