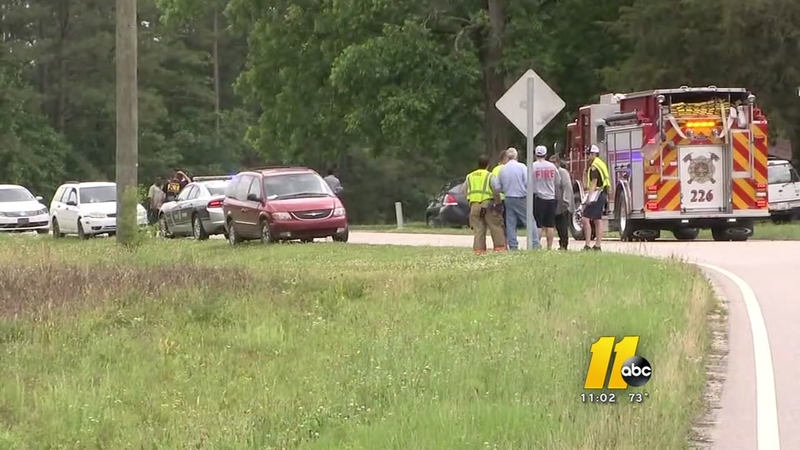 Girl struck by car in Zebulon

ZEBULON, NC (WTVD) -- Zebulon Police said a 17-year-old girl walking off the school bus was hit by a car just after 3 p.m. Tuesday at Carpenter Road and Zebulon Road.

A white Ford sedan apparently hit the teen and then left the scene, but was caught.

The girl was taken to the hospital. The extent of her injuries was not immediately known, but her father told ABC11 she will come home Tuesday night.

“He could’ve just kept on going and run her over and killed her.” Emotional words from father of girl who was hit after she got off from school bus today. #ABC11 pic.twitter.com/s2Tm7Dnj9i

Zeferino Garcia, the father of the girl said he helped stop the driver -- even daring him to run him over at the end of the cul-de-sac.

"He said he didn't see her but someone else said she just moved to where she was, which is the outside of the road," an emotional Garcia told ABC11. "How can you not see somebody from the distance when the sun is shining? If it were dark, if it were raining I understand but I mean, look at that."

According to father of teen hit: his daughter was walking down this road after being dropped off by school bus when white car clipped her. He says she’s at @WakeMed tonight. Man who hit her took off but was caught. Talking to authorities now #ABC11 pic.twitter.com/uVbftLbLVY

The car sustained damage to the front bumper.

Ray Leon, a neighbor, described the impact, which he heard while waiting for his niece to get off the bus.

Alonza King, the father of a 14-year-old that gets off the bus at the same stop said there have been complaints that buses couldn't pull all the way down Carpenter vs. dropping off at the corner there at Highway 96.

"I'm thankful it was not my child because if it had been my child, I'm not sure how I'd be reacting right now," King said. ""If the buses were coming and dropping them off like they'd been doing it wouldn't be a problem."
Report a correction or typo
Related topics:
trafficzebulonwake countypedestrian struckteenwake county news
Copyright © 2021 WTVD-TV. All Rights Reserved.
TOP STORIES
Moderna COVID-19 vaccine remains 93% effective for up to 6 months
LATEST: NC schools debate mask mandate for upcoming semester
Mistaken identity lands man in Hawaii mental hospital
Fire destroys cabin of man forced out of woods, jailed
US military to mandate COVID vaccines: ABC News sources
US plans to require COVID-19 vaccines for foreign travelers
Show More
Raleigh man uses Halloween display to make plea to unvaccinated
Lawsuit accuses police of pointing guns at kids during botched raid
Biden administration to announce actions to reduce pollution from cars
Target to offer debt-free college degrees to 340,000 US employees
UNC-Chapel Hill faculty committee wants university to require vaccines
More TOP STORIES News