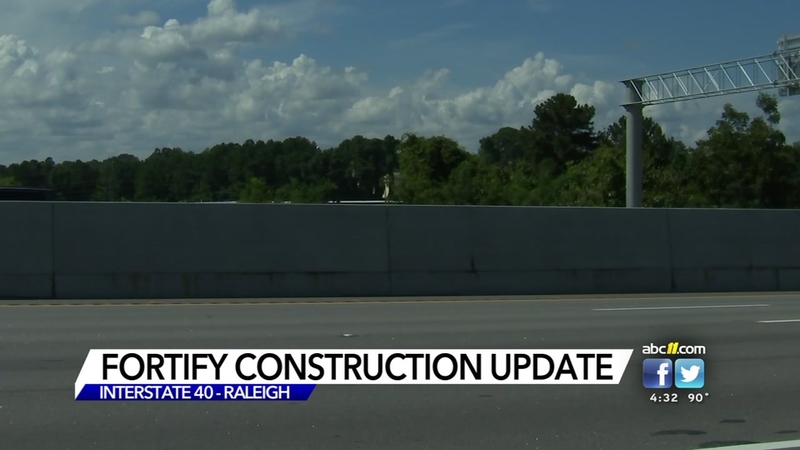 RALEIGH, NC (WTVD) -- This time last year the North Carolina Department of Transportation was saying the I-40 Fortify project would be wrapped up by fall of 2017.

But a year later, NCDOT said there is no firm timetable for completion.

Those who commute in either direction on the seven-and-a-half mile stretch of the Fortify project on I-40 on the south end of Raleigh, however, haven't seen any significant work in quite a while.

"Probably weeks. It's been a while," Tanisha Blair told ABC11.

Another commuter, Linda Brock of Clayton, said, "I haven't seen anybody working in quite a long time."

The DOT said that is because the project is virtually complete.

Some final clean-up and vegetation planting is going on overnight, but the only significant construction work is the filling of the sinkhole off the right shoulder of the westbound lanes of I-40 as you approach the U-S 1 exit.

Although the sinkhole was never officially part of the Fortify project, the Fortify contractor has been tapped to fill it. And until it is filled and the final pavement is laid on the exit-only lane for US 1, the project won't be considered complete.

DOT said that means the work-zone designation and 60 mph speed limit will remain in place on the seven-and-a-half mile stretch of the project in both directions.

Brock thinks it should be reduced, too.

"Keep it right near where the work is being done and let the traffic move freely in the other areas," Brock said.

Brock's husband, Bill, added, "When you don't see any work and you see a reduction in speed and a work zone and nothing being done it's an aggravation to people. And I think you need to eliminate that."

When told the sinkhole is the last major piece of work to be completed, commuter Richards Cobos responded, "I think it's time to up the speed limit, remove the work zone where they are not actually working to allow more cars through there."

"Nobody follows the speed limit through there," he said. "Everybody blasts through there at 70 miles an hour. And if you're trying to drive 60 miles an hour and observe it you're actually almost probably causing dangerous traffic conditions yourself."