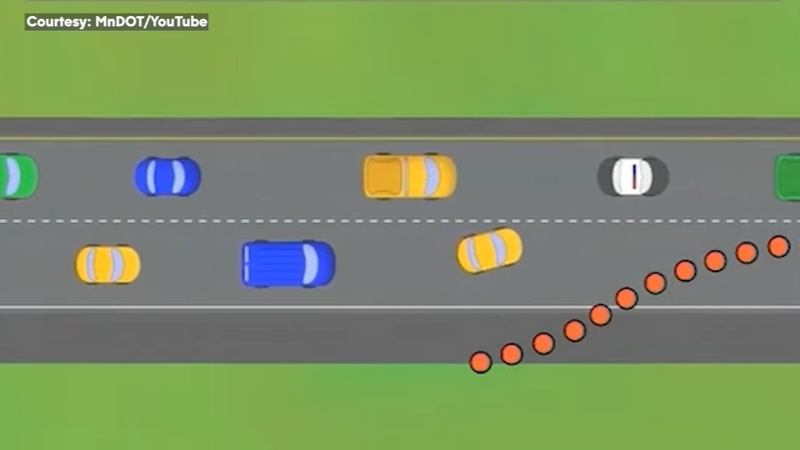 Merging where lane ends is not 'jumping the line'

RALEIGH, N.C. (WTVD) -- Rapid growth in the area, such as the recent announcement of Apple opening a headquarters here, is leading to what we're calling a Triangle Transformation.

In the coming months and years, ABC11 will be doing stories that will inform viewers about exactly what that transformation means to their lives.

One focus of Triangle Transformation stories will be traffic.

The North Carolina Department of Transportation is trying to manage the traffic congestion that comes with growth.

One way it's doing that recently is by educating drivers about a merging technique that will help reduce back-ups and in some cases move traffic quicker, especially in work zones.

Sometimes when lanes end traffic backs up further and moves slower than it has to.

That's where something called the zipper merge rule comes in.

It's called that because it works like the teeth on each side of a zipper which when meshed together form a single line.

In a public service announcement released this month by NCDOT the narrator says, "Taking turns to merge when signs direct drivers to do so, is a more efficient way to move traffic."

He goes on to say, "Drivers will be directed to use both lanes until reaching the work zone or merge point."

The zipper merge is a tried and true technique that's been used in Germany and other European countries for decades.

In recent years Minnesota's Department of Transportation has been promoting it.

It has even posted on its website an animation which shows how the zipper merge works.

Traffic proceeds in both lanes up to the merge point and each driver in the through lane allows one car to merge.

"I haven't heard of it," Raleigh resident Walter Stallings told ABC11 while putting gasoline in his car.

After we explained how it works, Stallings he said he thinks it's a good idea and is in-line with his driving habits.

"I always try to let them in just to keep an accident from happening," Stallings said.

That's unlike the current tactics of many drivers in North Carolina who merge early, wait a long time in a long line, and considers anyone who travels to the merge point in the other lane as someone who is 'jumping the line'.

Some of those drivers then try to block those other drivers from merging.

"There seems to be a lot of folks who feel slighted when people pass them for some reason," said NCDOT traffic engineer Kevin Lacy.

But the state's efforts go beyond educating drivers about zipper merge.

There's now a bill pending in the legislature that would make it law.

The bill would make it illegal for anyone to impede other drivers from merging into the through lane at the end of the lane that's closed.

"The concern was more to address the vigilante queue monitors more so than just promoting the zipper merge," said Lacy who also noted that the most common lane closures are in work zones.

In the PSA the narrator points out how growing pains can lead to traffic problems saying, "Highway construction brings much needed improvements but the work also can result in traffic delays."

During the Triangle Transformation we have plenty of that and it's only likely to grow.

So for some drivers like Brenda Venable using the zipper merge to reduce congestion is a great idea.

"It's going to speed up the process," she said, "And hopefully they use if for when there's an accident and, you know, there's only one lane. So hopefully people will apply it to other parts of being on the road."

Venable knows there will be a learning curve and she hopes it will start now.

So spread the word among family and friends that whether or not the zipper merge becomes, experts agree using both lanes and some common courtesy to allow one driver to merge in front of you is the best, fastest, and safest way to handle lane reductions and traffic back-ups.
Report a correction or typo
Related topics:
trafficraleighdurhamappletrafficdrivingraleigh newsdevelopment
Copyright © 2021 WTVD-TV. All Rights Reserved.
TOP STORIES
12-year-old killed in drive-by shooting while sitting at picnic table
Father, son among 4 injured in north Raleigh dog attack, police say
Woman seriously injured after being hit by gunfire in Durham
How the pandemic may have affected your sleep routine
Official: 1960s civil rights activist Bob Moses has died
Fauci: CDC may back wearing face masks more
Show More
Rain Returns
2 killed in double shooting on I-85 entrance ramp ID'd
Americans' optimism about US direction drops since May: POLL
21-year-old motorcyclist killed in crash in Fayetteville around 1 a.m.
Cary native Claire Curzan won't go to Olympic Finals
More TOP STORIES News