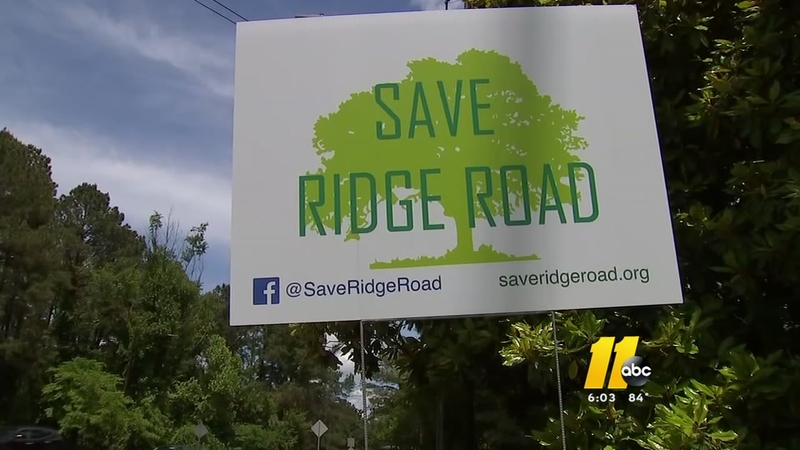 RALEIGH, NC (WTVD) -- Alice Tuttle and her neighbors living off Ridge Road near Crabtree Valley Mall in Raleigh are fighting to protect their road from expansion.

Tuttle put a sign in her yard that says "Save Ridge Road."

"I'm just too darn old to move now," said the 90-year-old Tuttle. "Nobody wants to live right in the middle of a highway."

Tuttle is terrified of what could happen to her Ridge Road if the Department of Transportation decides to make the street an alternate route for drivers off I-440 near Crabtree Valley Mall.

Tuttle and her neighbors have lived on Ridge Road for decades and have survived the growth.

When I first built my house - if I remember correctly, (the road) was not even paved," said Betsey Myrick, who built her home in 1952. "That says something about age doesn't it? And progress."

But what they don't want to see progress is traffic noise, congestion, loss of property and neighborhood trees.

"Pour it somewhere else," Tuttle said. "Put it on the beltline or Glenwood or somewhere. Just don't put it up here on us. I don't think we deserve that."

And perhaps neither does the area around the beltline and Glenwood.

NC DOT will spend more than $230 million to alleviate the problem when it starts construction in 2019.

RELATED: Read more about the project

The project has just begun. One route DOT will likely take is adding a second entry point to Crabtree Valley Mall off I-440.

And they want neighbors' input on alternatives.

Earlier this month, NCDOT hosted a packed public forum to generate ideas and collect people's opinions. Concepts that may end up in the final proposal due later this year.

"We want to address those concerns and still meet the needs from a congestion standpoint and a safety standpoint and tie all that together," he said.

The next public meeting is this fall.