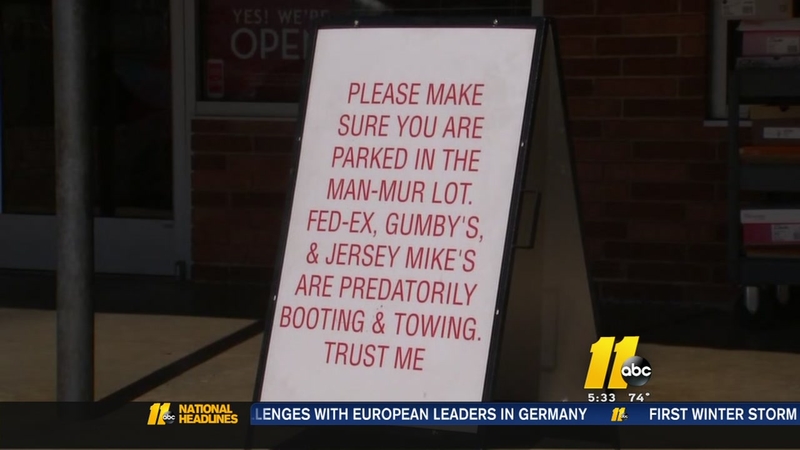 Predatory booting going on in Raleigh

RALEIGH (WTVD) -- A Raleigh towing company is being accused of predatory booting -- disabling your car with a metal boot until you pay up.

If you are a customer of certain businesses on Hillsborough Street, you know about allegations of predatory towing and booting at the businesses next door because it's posted prominently.

But for other customers nearby, they have to read closely to avoid a quick $50 penalty.

After a quick glance at a sign as he pulled into the parking lot Tuesday morning, FedEx customer Abdulla Mubarak figured he was fine.

"So I was under the assumption that as long as I'm doing business with those I'm OK," Mubarak said."

Mubarak admits that when he saw the spaces in front were full, he pulled alongside some landscape timbers where there are no marked spaces.

"As you can see, there's no signs," Mubarak said. "If they say there's no parking put a sign right here saying you will be towed, you will be fined $50."

Mubarak said he noticed a man who had been sitting in a car get out and start walking toward where he was parked but thought nothing of it.

He went into FedEx briefly, dropped off a package, and got a receipt time-stamped just seconds after 11 a.m.

When he came out, there was another receipt on his car showing that Unlimited Towing and Recovery put a metal boot on his wheel less than two minutes earlier at 10:59 a.m.

He was then approached by the same man he saw walking toward his car as he got out a couple of minutes earlier.

He was told it would cost him $50 to get the boot off his wheel so he could leave.

"He had an opportunity to say, 'hey, illegally parking. You can't park right here. I'm going to give you a ticket.' but he chose not to because he knew that he was going to get $50. And I think it's a shameful act."

The man who booted Mubarak's car was back out there Friday but wouldn't talk to ABC11.

Soon, another man showed up.

When asked if he was with the towing company or the shopping center, the man refused to identify himself.

"Right now you are filming me on private property," the man told ABC11. "You do not have my permission to film me right now. OK?"

No one at some adjacent businesses would go on camera to talk about it, but they had many stories about elderly women and mothers with children getting the boot after parking there and then coming to their businesses.

"It happens quite a bit for them to put the sign up to warn their customers," Mubarak said. "It's not a good experience for anybody."

ABC11 tried to reach the owner of the property that houses FedEx but was not able to find contact information.

Mubarak was left with just one question: "I wonder, I mean, does the owner get a cut out of this?"

Officials with the City of Raleigh tell us they have no jurisdiction when it comes to complaints of predatory parking or towing on private property.

So the best advice in a situation like this, is be cautious and read the entire sign.