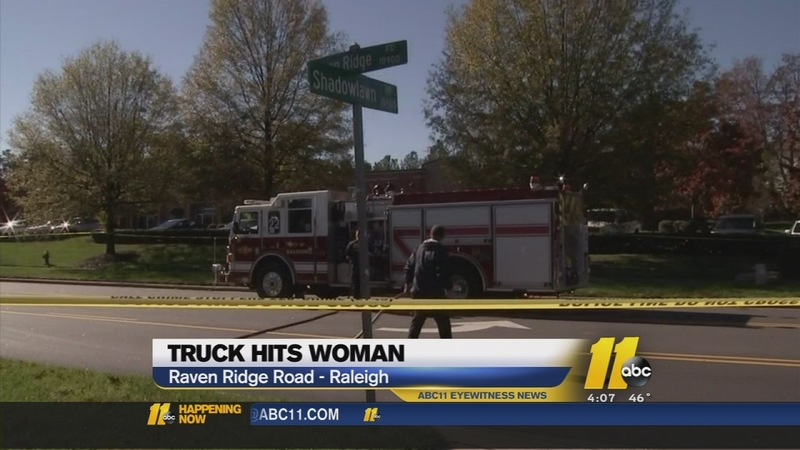 RALEIGH (WTVD) -- A woman was rushed to the hospital late Monday morning after being hit by a truck in north Raleigh as she tried to cross the street.

The accident happened just before noon on Raven Ridge Road at Shadowlawn Drive.

Authorities said 19-year-old Keira Matson was struck by a passing landscaping dump truck. She was taken to WakeMed where she was listed in critical condition.

The landscaping company told ABC11 that the driver of the truck was on Raven Ridge Road headed toward Durant Road when he noticed Matson trying to cross the street as he passed.

Matson hit her head on the dump truck bed. A driver behind the truck said Matson appeared to be distracted as she tried to cross the roadway.

"They noticed that she was about to take a step out, you know, from the sidewalk onto the street. They kind of swerved out. She stopped. Three-quarters of the vehicle passed and she stepped out and apparently, from what I hear, hit her head on the side of the dump truck as it passed by," Pettit continued.

Raven Ridge Road was blocked to traffic for over an hour as authorities investigated the incident.

"Our condolences go to her family. We hope that she's okay. That's first and foremost. But our driver's visibly shaken but doing okay," said Pettit.