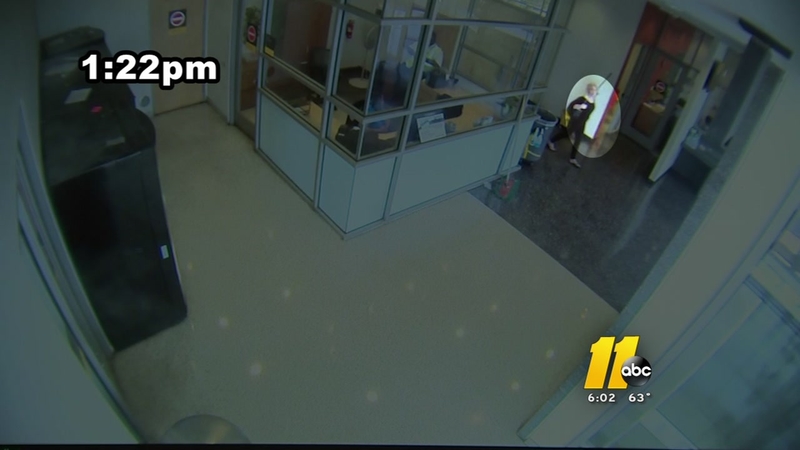 DURHAM (WTVD) -- New video shows a different perspective in a back and forth debate between the City of Durham and a transgender woman's bathroom experience inside the Durham Transit Center.

The transgender woman's name is Alexis Adams. She says on Thursday afternoon, she was escorted out of the women's restroom by security. The city of Durham owns the Transit Center and says that never happened.

Surveillance video at Durham's Transit Center shows Adams walking into the women's restroom at 1:17 p.m. About four minutes later, a janitor enters the restroom. Adams says the janitor confronts her and tells her to use the men's restroom or she would call security. Adams, who transitioned to female 5 years ago, told ABC11 she was embarrassed.

"There [were] other people in there and as I was walking out of the bathroom and security took me out," Adams said on Thursday. "The woman was making a scene about it."

But on camera there doesn't appear to be a scene. City leaders released the video to ABC11 Saturday. In a statement, Durham Public Affairs Director Beverly Thompson says:

This is an allegation that the city takes seriously. We along with Gotriangle have investigated the claim aired on WTVD by talking to staff and police department personnel. We also viewed the video and can find nothing to support this person's claim that the incident described actually occurred.

On Saturday, ABC11 showed Adams the surveillance video of her walking out of the women's restroom alone and not by security. Adams response was, "They're not in the shot."

ABC11 showed Adams a different camera angle-this time of her walking out of the transit center with a man that does not appear to be a security guard. Adams response was, "I can't. I guess you just had to be there to witness it. The security did escort-ask me to leave the premises. They may not have dragged me out of the bathroom but they were there."

Adams says she is sticking by her story, and that no one has influenced her to come forward.

What's not clear is if the janitor said something to Adams inside the restroom. The video only shows Adams going in the restroom alone and walking out alone.

The city is asking people to call police if they saw something to support Adams' allegation.