Motorized scooters could roll into Durham around the holidays 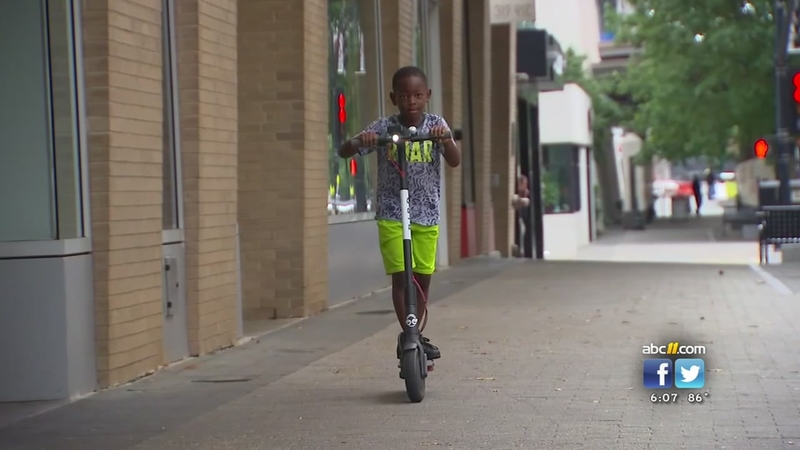 Motorized scooters could arrive to Durham around the holidays

DURHAM, N.C. (WTVD) -- Motorized scooters are all over the city of Raleigh. And now they are one step closer to arriving in Durham.

But the scooters will be regulated in the Bull City.

On Thursday, city council held a work session to discuss a draft ordinance, the first of its kind in the state for motorized scooters, according to city leaders.

The draft ordinance would force scooter vendors such as Bird, Spin, and Lime to operate with a permit -- a license that would be contingent upon unspecified approvals from state agencies such as the Department of Transportation and Department of Motor Vehicles.

On Thursday, the council posed several questions to a representative for Bird. For example, how to reconcile the age limit. The California-based company requires customers to be at least 18.

The council ordinance requires the minimum to be 16.

"That's something I will have to discuss with Bird," said April Byrd, a representative of Bird. "In other cities, they haven't lowered. They just feel that 18 is better..more responsible users."

Mayor Steve Schewel wanted to what kinds of ID would be appropriate for the customer to unlock access to the scooters.

Schewel asked if a passport or a Faith ID sufficed. The mayor showed Byrd a Faith ID card, which is a form of identification more than 3,000 undocumented immigrants use in the Triangle, according to Schewel.

"My understanding is long as it has a date of birth," said Byrd, who agreed to look into the matter.

And then there's the topic of safety.

Raleigh reports 11 crashes since the scooters debuted this summer.

Charlotte reports at least two, according to Byrd.

City leaders say before they approve the ordinance they would like a crash analysis.

Durham leaders say they also want the scooters to be spread out across the city so low-income neighborhoods will have access.

Both Durham and Raleigh are working together on drafting ordinances that are similar.

Durham hopes to approve its ordinance at its next council meeting on October 15.

Raleigh transportation leaders will present there draft to city council on October 16.