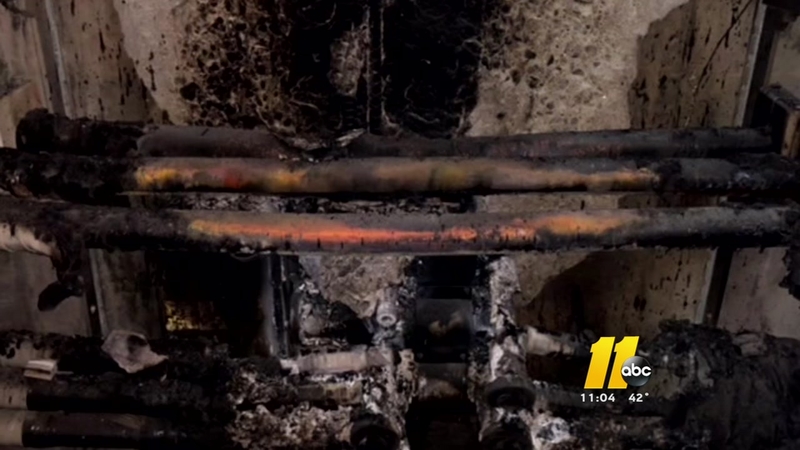 Twenty-five hours after beginning her journey from Memphis to visit relatives in North Carolina, Caroline Carroll finally made it to RDU.

"All's well that ends well! But it's chaos there now," Carroll told ABC11 on Monday. She said she got no sleep during the time she spent in airports and on the tarmac in Atlanta, waiting for her plane there to take off.

There were no lights, no way to charge mobile devices, she and other stranded passengers said about the conditions during the power outage at Atlanta's airport. They had nowhere else to go and was stuck in uncomfortable positions while waiting.

"People were sleeping everywhere," said Bradley Wilson as he entered Terminal Two where his father, Phil Wilson, waited. "They were handing out snacks, they didn't have any real food so you ate crackers and pretzels."

Phil Wilson added, "He was hungry so you know, you worry about that kind of thing."

Some passengers, like Carroll, said they saw and heard some unusual things during the power outage.

"The pilot came out and said, if anybody has access to the outside, please tell us what's going on. Because he was getting no information," Carroll told ABC11.

Wilson managed to keep his phone charged so he stayed in touch with his dad, who arranged for a flight that brought him to RDU on Monday.

"Glad to have him home," said Phil.

The blackout forced airlines to either cancel flights altogether or divert them.

"We were actually shocked," said Karen Iberte from Georgia. "I've flown a lot and this has never happened ever in my life."

Iberte and Heather Joestings, who is also from Georgia, were two hours into their flight from Rhode Island to Atlanta when their plane diverted to RDU on Sunday afternoon.

They waited at RDU for hours only to learn their flight was delayed until Monday morning.

"It really stinks," Joestings said. "I really want to go home but there's really nothing I can do about it."

The cause of the power outage at the nation's busiest airport has not been confirmed.

The problem grounded dozens of planes and left thousands of people stranded.

Casey Williams of Durham is one of the travelers who, for frustrating hours, had with nowhere to go.

His Delta flight home to Atlanta for the holidays was stuck on the airport's tarmac at 2 p.m. Sunday. Williams said it took more than seven hours for him and his fellow travelers to evacuate the plane.

"I've been really impressed by everyone on the plane. People are actually much calmer and composed than I expected to be in a situation like this." Williams said.

It's usually a quick flight from Atlanta to Raleigh. But for Gary Leach, and so many others, it turned into a two-day journey.

He said he noticed there was a problem when his plane was boarding but stopped after only half the passengers were on board.

"The lights went out on the plane, the pilot came on and said there's no problem we're just unplugging from the gate we're going to plug back in and we'll be good to go," Leach said."

But that was not the case.

Leach said he ended up staying on the plane for four hours.

"The engine was running, they kept the air on, we had lights, we ate all the peanuts, all the pretzels, all the coke," said Leach.

He said the pilot told them it was a better situation than inside of the terminal where it was dark, hot, no food and no working restrooms. When the flight was finally canceled, Leach said it was at that time he learned it was more than just a blackout.

"We had no idea there was a fire."

The shock of that quickly wore off as he tried to leave the airport. The trains inside the airport that take you from terminals to baggage claim, were not working. People walked in the dark by cell phone light and the escalators were crowded with people trying to climb them.
"There were older citizens who could not navigate those escalators so I helped one lady just get to the top and with every step she was just praying."

Finally, after almost waiting for two hours for a taxi, Leach was able to make it back to a hotel for the night. He boarded a plane for RDU Monday afternoon and after just a five-minute delay, he made it back home on time.

He was flying Southwest and said the airline compensated him for his flight home because he had to buy a new ticket while his bags were checked with his original flight.

By Monday, though, the Atlanta airport resumed normal operations.