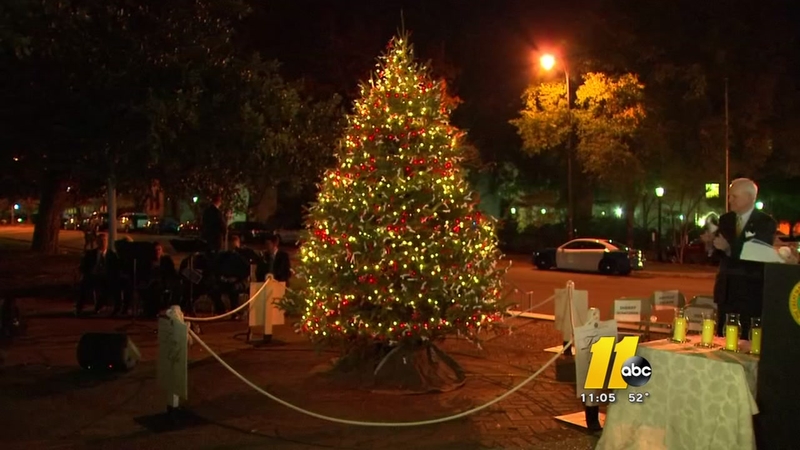 RALEIGH, North Carolina (WTVD) -- Singing the songs of the season on the east front of the State Capitol, they lit candles in honor of the loved ones who aren't here to celebrate.

They were here to dedicate this year's Tree of Life to the 1,442 people killed in North Carolina car wrecks in 2016.

"I hope that my story motivates others to think before they act," Wilmington mother Alexandria Williams said to the crowd.

Williams' 2-year old son, Mason, is represented by one of the tree's 403 red ribbons and red lights. One for each person who died in a crash with an impaired driver.

Williams was driving that day in Wilmington with little Mason in the back seat when they were hit.

"Our car was shoved across an intersection," she said, holding back tears. "My husband and I saw our 2-year-old son slumped over in his car seat with blood dripping from his ears."

Family members of victims of traffic-related crashes gather to dedicate this year’s “Tree of Life”; each light and ribbon represents a life taken by drunk or distracted driving and other preventable crashes. NEW AT 11 #abc11 pic.twitter.com/7YEiy0Yq25

The 1,038 white ribbons and lights on the tree are for all other traffic fatalities statewide last year.

Chris and Terry Pierce's son Cody was killed when he drove head-on into a tractor-trailer less than a mile from his family's home in Knightdale. The tractor-trailer driver was not hurt.

"I had the task that no parent ever wants to do. I had to unzip the body bag and identify my son's body," Mr. Pierce said in his remarks on stage.

The Pierces suspect the 20-year-old was distracted, maybe by his car stereo or his cell phone.

"Nothing is that important to distract you while you're driving safely," Mr. Pierce said.

There is a single blue light on the Tree of Life this year too, marking the life of an officer killed in a traffic-related crash.

"Deputy Isenhour's life reminds us to never judge a life by its duration but rather by its donation," Forsyth County Sheriff William Schatzman said.

Gov. Roy Cooper attended the ceremony as well. He offered a comforting hug to some of the still heartbroken families.

The tree is a joint effort by the NC Department of Transportation, the Governor's Highway Safety Program, and Mothers Against Drunk Driving.