'I was appalled:' Residents raise alarm about unsafe stairwell at Raleigh apartment building 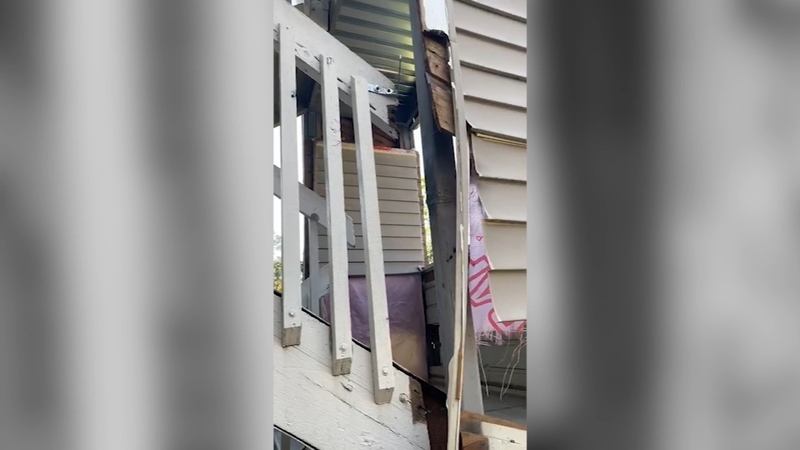 'I was appalled:' Residents raise alarm about dangerous, unending repairs at Raleigh apartments

RALEIGH, N.C. (WTVD) -- At The Trestles Apartment Homes in Raleigh, some tenants said getting to and from their homes has been like taking their life into their own hands.

Amid what they describe as an unending amount of undone repair work, the banister of the staircase everyone uses at one of the complex's 3-story buildings is literally detached from the frame of the building.

There are holes in the steel steps and no protection from the sharp nails. There's no caution sign with nothing roped off to warn of the danger. Residents have had enough.

"The company is taking their money, but they're not giving them a decent place to live, a safe place to live," said Crystal Bodie Smith, who describes herself as a hope catalyst and community advocate. She doesn't live at the Trestles, but her daughter and many of her friends do. They were hesitant to go on camera for fear of retaliation.

Bodie Smith insisted their $900 monthly rent is more than enough justification to raise alarm about the dangers they say have lasted for over a month.

"I went there and I was appalled because I saw the banister was separated. So as you're walking up, I couldn't believe it. And that was just the first level. When I got to the other level, the stairs were shaking," she said. "This is their only entrance. They don't have any other way to get to their home."

Raleigh apartment tenants raising alarms after weeks of unending and undone repair work. #abc11
• • •
“People are already hurting because of the pandemic. If people can pay their rent, the landlord needs to fix it.” pic.twitter.com/9nMD6kmhoF

"It's a big joke and I think the organization downtown needs to go and really make the (apartment management company) be accountable and make them to what they need to do," said Smith.

The Trestles Apartment Homes management office did not respond to request for comment. But, when we contacted the City of Raleigh Code Enforcement Division -- an inspector was on site within 90 minutes to check it out.

The property manager told the inspector that the precarious staircases at several of the buildings are currently under repair.

"Sometimes these things do look kind of bad at first glance, but if they're in the process of repairing it and we just caught them in the middle of it, then we'll obviously give them a little time to fix it," said Code Enforcement Administrator Bryce Abernethy.

Abernethy said the complex has numerous other complaints filed against it at the Code Enforcement Office unrelated to the staircases. We've filed a public records request for the precise number of complaints and the details of what they are alleging.

Smith is tired of waiting.

"It's not fair. People are already hurting because of the pandemic. It's not right for management to take advantage of them. If people can pay their money, they need to fix it," she said.