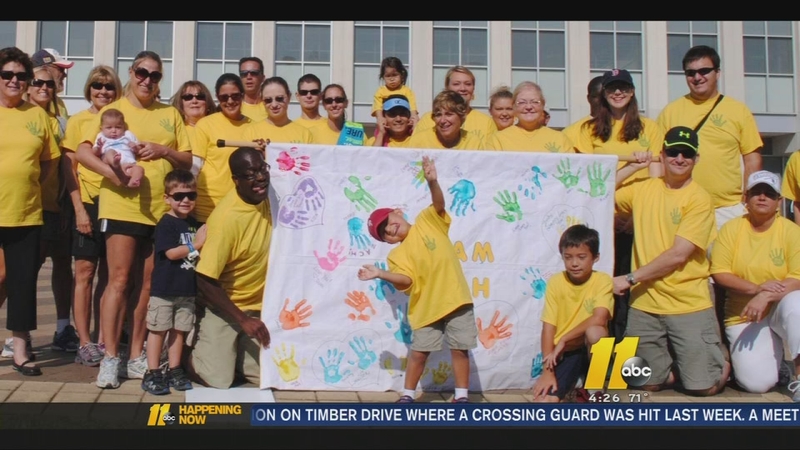 DURHAM (WTVD) -- A walk coming up in Durham this weekend is aimed at making strides in the fight against pediatric cancer. As a result, one Cary family is sharing their story of their son's fight to encourage others to come out and walk to raise money to find a cure.

Zach Levi had just turned two when a trip to the doctor's office turned his family's life upside down.

"He did an ultrasound on his liver, and that's when they found a mass the size of a grapefruit on him," said his mother, Pam Levi.

The diagnosis was Neuroblastoma, which meant Zach began an 18-month battle, including chemotherapy. That ultimately led to the cancer being in remission. That lasted two years, long enough for Zach to become a big brother. And then, they learned the cancer was back.

Since then, the now five-year-old has been undergoing treatment, but the past year and a half have been filled with a lot of ups and downs.

"We went through a really scary time a couple months ago when he was going through a different type of chemo and we were worried it wasn't working because the cancer had really spread. It had spread to his lungs and he was on oxygen," Pam recalled.

But Zach pulled through and is now doing a new type of high-radiation therapy called MIBG offered at Duke University Hospital.

"It's day by day; we're taking it day by day. It's a roller coaster, some days are better than others," Pam admitted. "But, we just love on him, and we have wonderful support and that's what we need."

Family and friends rallied around the Levis at last year's Triangle CureSearch Walk, and they'll be back walking for Zach again this year.

The walk will take place at 10 a.m. at the Durham Bulls Athletic Park on Saturday, Oct. 25 rain or shine. Pam and her family are hoping people will not only come out and walk, but will donate money, as well, to go toward finding a cure once and for all. For Pam, that's her dream come true.

"Look at diseases that have been eradicated with just a simple vaccine. I would love to see that with cancer, with all types of cancer, but especially childhood cancers," she said.

Meanwhile, despite the battle, Zach continues to wage. He keeps smiling and keeps fighting; giving his family the strength they need to hold out hope that he'll beat this round of cancer too.