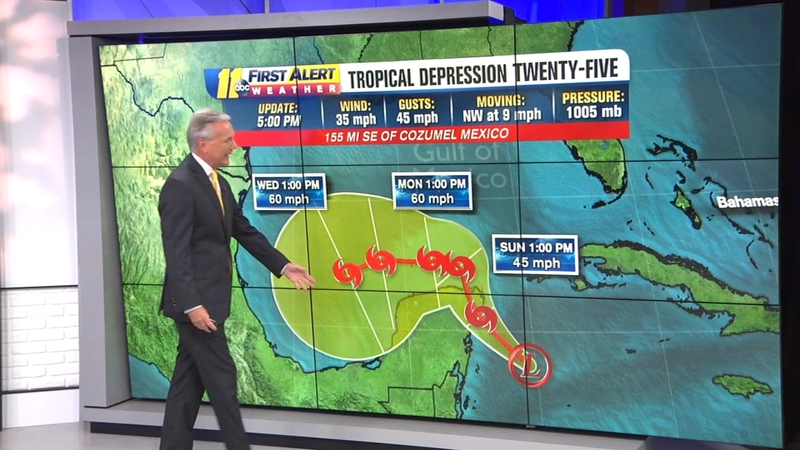 Tropical Depression 25 will likely become a tropical storm later tonight. The next name up is Gamma. pic.twitter.com/WMa6V9rtyt

The tropical depression could develop into a tropical storm as the system moves northwestward near the north coast of the Yucatan Peninsula. However, it is also possible the tropical depression or tropical storm could track over and across the northern Yucatan. This would limit or potentially inhibit development. It is then forecast to move slowly to the west then southwest into the eastern Bay of Campeche during next week.

Regardless of the strength of the tropical system, heavy rainfall leading to the risk for flash flooding will remain across the Cayman Islands through Friday, as well as parts of the Yucatan Peninsula and Cuba through the weekend and potentially into early next week.

A second tropical wave is moving into the eastern Caribbean with gusty winds and locally heavy rainfall across the Lesser Antilles and eventually as far north as Puerto Rico and Hispaniola over the weekend. This system will move westward across the Caribbean during the rest of the weekend and next week. This system has a low chance of becoming an organized tropical system during the middle or latter part of next week over the northwestern Caribbean.
Report a correction or typo
Related topics:
weathertropical stormtropical depressionhurricane
Copyright © 2021 by The Associated Press. All Rights Reserved.
TOP STORIES
WEATHER: Hot, humid day on tap with feels-like temps up to 103
Surviving combat to die at home: Soldier picking out his coffin at 35
Teen girl attacked by bear while sleeping in hammock
Waitress attacked after confronting group who didn't pay $70 bill: Police
Tornado touches down in Chicago suburb, destroying homes, trees
Claudette pulls away from North Carolina coast
High court sides with former athletes in dispute with NCAA
Show More
3 firefighters hurt while battling Chatham County fire
Amazon Prime Day sees Walmart, Target offering their own deals
LATEST: US COVID deaths dip below 300 a day
Wakefield HS grad wins $1.6M in Big Rock fishing tournament
3 injured in hot air balloon crash near Denver: Authorities
More TOP STORIES News