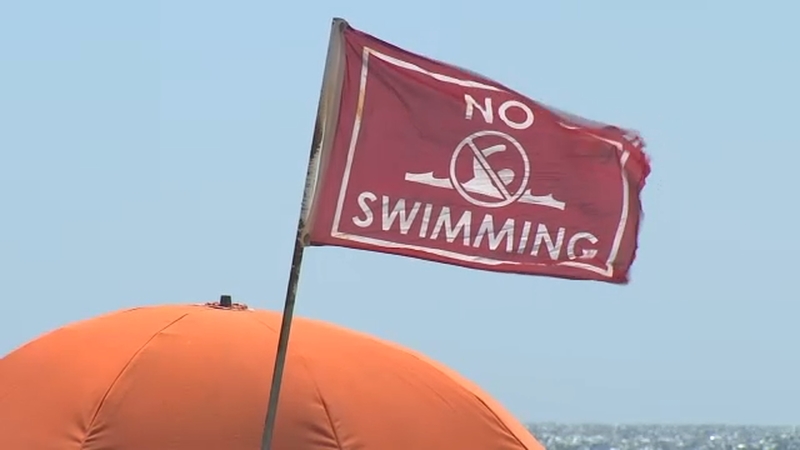 ATLANTIC BEACH, N.C. (WTVD) -- On land Monday it was gorgeous but in the waters along North Carolina's coastline it was rough and potentially dangerous due to Tropical Storm Alex moving through the Atlantic Ocean.

Even though Alex never made landfall in North Carolina, saying hundreds of miles out to sea, lifeguards say the energy from the storm brought thick, loud waves to shore Sunday and Monday.

People are being encouraged to not get in the water.

"Know your limits. On a day like today, red flags are up. Help your lifeguards keep everybody safe by staying out of the water," said David Elder with Town of Kill Devil Hills Ocean Rescue.

ABC11 spotted tourists and locals alike sunbathing on the beach instead of going in the water.

"We were raised along with every other local knowing to not even go close to the water like that unless you are trained--you know how dangerous it is," said Elizabeth Fields from Dare County.

John McCarthy and his wife are visiting from Fredericksburg, Virginia. They couldn't resist the waves.

Yellow flags were out on Monday, warning visitors to watch out for possible rip currents because of the storm.

"We did our due diligence and talked to a lifeguard beforehand, she advised us don't go above the knees so we'll probably take the waves after they crash," said McCarthy.

Kyle Henny and his family are visiting from Pittsburgh, Pennsylvania. They were concerned Tropical Storm Alex would ruin their vacation. They're happy the only impact of the storm is rough waves.

"I think they are pretty intimidating honestly. I don't know if I would get in there myself. I'm a decent swimmer but not that strong," said Henny.

There were a handful of rip current rescues over the weekend.

At Atlantic Beach, Yellow flags were out Monday, warning visitors to watch out for possible rip currents because of the storm.

Some beachgoers were happy about the change in conditions. Wes Whitt is one of the surfers who welcomed the higher than usual waves after the first named storm of the season pushed off further into the Atlantic Ocean.

"There's a lot of water moving right now around that pier, as you can see. And the hardest part about getting out, and the most critical, is getting out!"

Whitt also knows some people underestimate the risks here. "The tide's starting to come in now, so you can be out there and it'll shift directions. You'll get pulled into the pier without knowing. So it's all inside the first 50 yards. That's where your danger is," he said.
Report a correction or typo
Related topics:
weatherncbeachestropical stormrip current
Copyright © 2022 WTVD-TV. All Rights Reserved.
TOP STORIES
Is your home prepared for hurricane season?
Spotted lanternfly sighting confirmed in North Carolina
Wake County continues to scale down COVID-19 testing sites
Man struck by lightning near island off North Carolina
Fireworks dazzle over Dix Park, downtown Raleigh for Fourth of July
Highland Park 4th of July parade shooting survivors speak out
Renters struggle to find apartments in hot housing market
Show More
Brittney Griner writes letter to Pres. Biden pleading for his help
2 police officers shot during July 4th festivities in Philadelphia
Highland Park parade shooting victims range in age from 8 to 85
Person of interest taken into custody after 6 killed in IL shooting
Don't celebrate July 4 by shooting guns, police warn
More TOP STORIES News