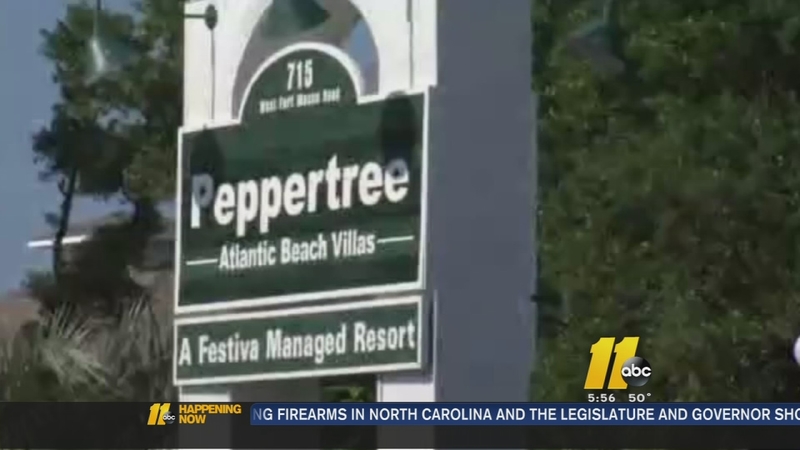 ATLANTIC BEACH, NC (WTVD) -- When you purchase a timeshare for vacation time, you expect to be able to sit back and relax, but that's not the case for a group of timeshare holders. One local family had been planning their family vacation only to find they couldn't enjoy their condos.

Every year, Joe Melendez and his wife look forward to relaxing at their timeshare at Atlantic Beach.

"I loved to be able to watch the sunset and the sunrises in the morning," Melendez said. "Nothing more enjoyable when you're on vacation."

The couple was excited to use their week at the Peppertree Atlantic Beach Resort this past October, but before their trip they got a letter from the HOA's Board of Directors.

It explained how the town of Atlantic Beach deemed several buildings at the Peppertree Resort, including the Melendez's building, as unsafe due to the conditions of the stairwells and walkways.

The town condemned several of the buildings, meaning Melendez and his wife could not use their October week at their condo, despite already paying their yearly maintenance fees.

"I just felt that it was just not right," he said. "Either return my money for this year or go ahead and allow me to stay in another building, a newer building."

Despite several of the other buildings at the resort open and still available for rent, no options were offered.

"I felt like they just didn't care, either accept it or don't accept it," Melendez said.

Carolyn Newton and her grandson Christopher didn't enjoy their timeshare either.

"It's just our hard luck we just happen to be one of the unfortunate ones," Newton said.

Newton has been going to Peppertree for the past 29 years. They also got the aforementioned letter saying their condo was off limits.

Newton also paid her maintenance fee of $700 this year.

The attorney for Peppertree sent us this statement:

"The letter really explains the situation as it developed for Phase 2 of Peppertree. Maintenance fees are paid by the owners each year and are expended in the operation and maintenance of the buildings on an annual basis. This is a requirement of ownership of the timeshare week, which legally is a fractional ownership in a condominium unit and is governed by recorded covenants much like conventional condominium developments. The repairs or replacement of decks and stairwells in these 30-year+ ocean-front buildings was inevitable because of wear and tear in coastal conditions, and, we now know, the need to bring the structures into compliance with current building codes that were not in effect at the time the buildings were constructed. It was the hope of the owners association that repairs could be phased so that vacations were not interrupted. Unfortunately, the Town of Atlantic Beach intervened with condemnation proceedings in their effort to enforce what they saw as safety issues. While the owners association disagreed about the need to shut down operation of the buildings during the repair process, the condemnation triggered cancellation of the HOA's insurance, and the buildings certainly could not be occupied without insurance protection. Therefore, the Association had no choice but to acquiesce in the Town's decision to deny occupancy of the buildings and proceed with necessary repairs which are expected to be completed before the 2016 vacation season.

It is certainly unfortunate that any Phase 2 owners were prevented from using their timeshare week after August 17th; however, this is an unfortunate consequence of ownership. It is important to keep in mind that ownership of a fractional interest in a condominium is different than a vacation rental contract - the incidents of ownership sometimes necessarily dictate that owners share in the risks that are inherent in having to make repairs to the structure in which their unit is located. I am not sure if every owner understands the nature of their interest, but this is the reality."

The reality is owners such as Newton and Melendez will not be able to use their condos until repairs are complete. That's something hard to explain to Newton's grandson, as he keeps asking when they're going back to the beach.

"It's something he looks forward to and he doesn't get that much. He is just a special kid and you want to do everything for him and now we can't," Newton said.

The repairs have yet to start on the stairways and walkways, but the attorney said they hope to get started the first of 2016. If all goes as planned, she said the association hopes to have the repairs done by May 2016. She said the maintenance fees collected will be paying for those repairs.