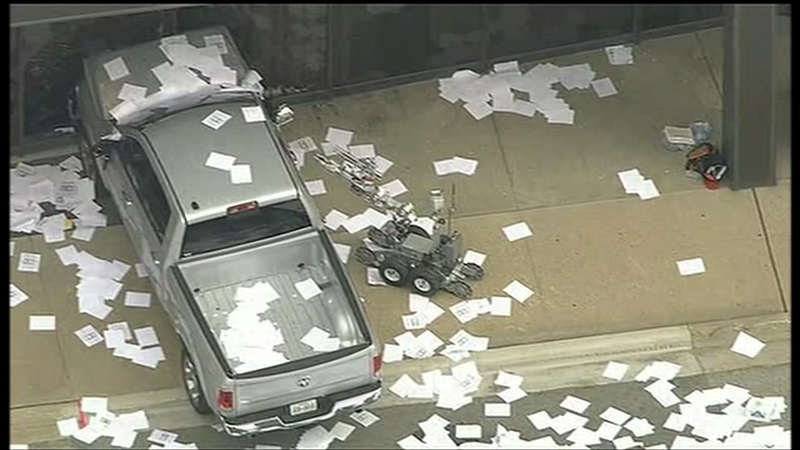 DALLAS, Texas -- Police have detained a "ranting" man accused of crashing a pickup truck into a Fox affiliate television station building in downtown Dallas during a live newscast.

According to KDFW-TV, the man repeatedly rammed his pickup into a portion of the building with floor to ceiling windows, then got out of his vehicle and started ranting.

KDFW posted details on Facebook showing photos of the front of the vehicle rammed into windows near an entrance. The man paced and scattered numerous handwritten papers outside. He was not able to enter the building and was soon arrested.

Police say the man had 'mental issues' and said people were trying to kill him. He also apparently wanted extra media coverage of a 2012 officer-involved shooting.

Individual in custody for incident at @fox4 had mental issues and indicated “people were trying to kill him”. Also apparently wanted additional media attention to an officer-involved shooting from 2012 in neighboring county.

Emergency responders were called to the scene at about 6 a.m.

Dispatcher audio recorded, "We believe it is intentional. He is purposefully ramming his vehicle now."

A truck crashed into a TV station in Dallas.

When police came into contact with the man, they say he was in an agitated state, rambling and talking nonsense.

Bomb unit officers investigated a suspicious bag the man left at the scene.
The TV station says most of their employees were evacuated from the building.

Anchors who continued on the air through the 7 a.m. newscast, despite the crash, say nobody was hurt. The truck hit an unoccupied administrative side of the building before office workers arrived for the day.

A KDFW statement said, "A man crashed a truck into the side of our building this morning" and "jumped out and started ranting."

Anchor and reporter Brandon Todd, who witnessed the man pacing outside the station before he was arrested, said the man was yelling about "high treason," and that he believed he had clearly been wronged and that someone was trying to kill him.

"It's not real clear to what his message was," according to Todd.

The man started crying when police took him into custody, Todd said.

Streets around the building were shut down to traffic during the investigation.

Police are not releasing the man's name. He was taken to Parkland Hospital for treatment.