Trump's comments on women front and center at debate 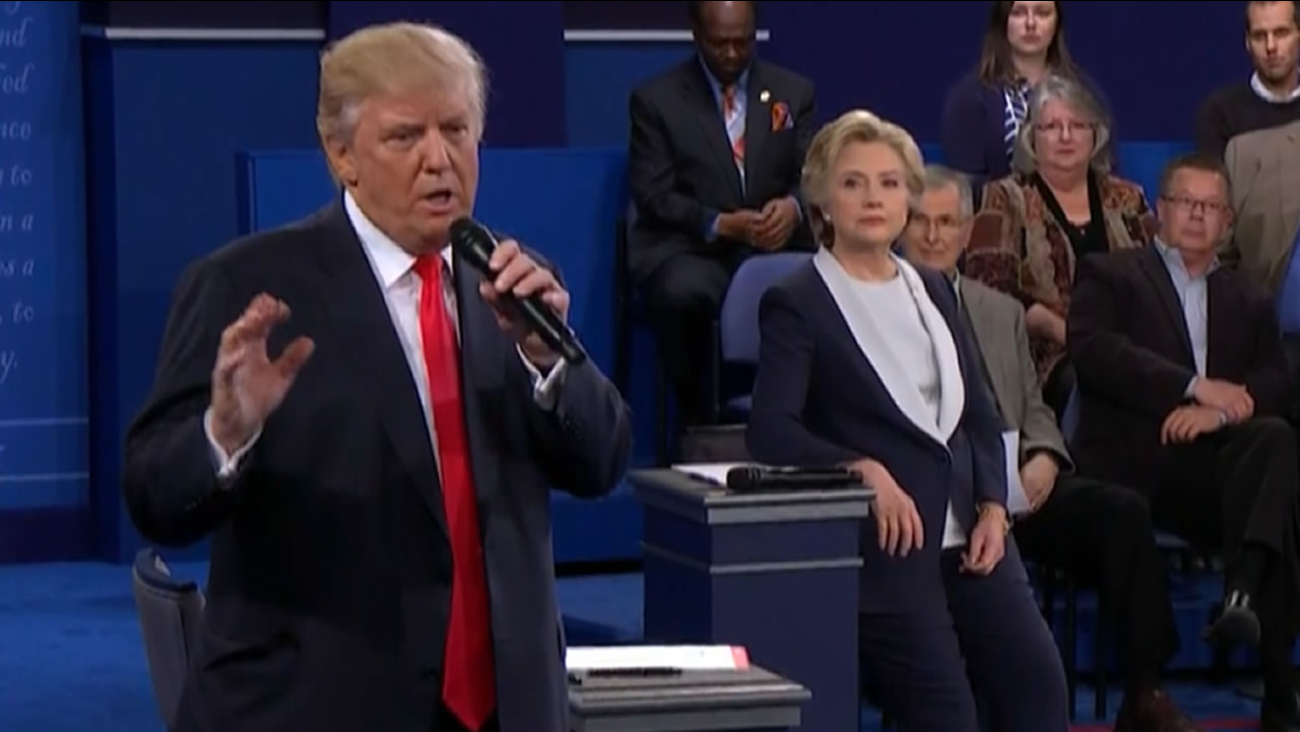 ST. LOUIS (WTVD) -- Hillary Clinton and Donald Trump refused to shake hands as they entered the hall in St. Louis. Sunday for their second debate and it was clear from the beginning that would be the tone for the evening.

Who do you think won the second presidential debate Sunday night?

Friday's release of a video in which Trump is heard making crude comments about women was the first topic brought up by moderators.

Trump denied that he ever kissed and grabbed women without their consent, then argued that his recorded words paled in comparison to what he called Bill Clinton's abuse of women. Standing a few feet away from the former president's wife, he accused Hillary Clinton of attacking those women herself.

There was no handshake at the beginning

"She should be ashamed of herself," Trump declared.

Trump responded: "No, I didn't say that at all. I don't think you understand what I said."

Trump continually tried to pivot to foreign policy, seemingly suggesting his comments pale in comparison to the actions of the Islamic State.

Clinton stared icily at Trump from across the stage. She did not respond directly to his accusations about her husband's extramarital affairs or any role of her own, but was blistering in her condemnation of his aggressive comments about women in a 2005 tape released Friday.

"I think it's clear to anyone who heard him that it represents exactly who he is," she said, adding that she did not believe Trump had the "fitness to serve" as commander in chief.

She continued by quoting Michelle Obama's speech at the Democratic National Convention: "When they go low, we go high."

Bill Clinton never faced any criminal charges in relation to the allegations, and a lawsuit over an alleged rape was dismissed. He did settle a lawsuit with one of the women who claimed harassment.

Later in the debate, Trump admitted he used a $916 million loss in 1995 to avoid paying federal income taxes.

Trump's has drawn scrutiny for not releasing his federal income tax returns, as is common practice for presidential candidates, saying that he is currently under audit.

A portion of his 1995 tax returns were leaked to The New York Times and those pages showed that he claimed a $916 million loss, which may have allowed him not to pay personal federal income tax for a number of years afterwards.

The three pages from the state returns -- New York and non-resident filings from Connecticut and New Jersey -- were not disputed by the campaign.

When asked if he used that loss "to avoid paying taxes," Trump said "Of course I do, and so do all of her donors."

"I understand the tax code better than anyone and it's complex," Trump said.

"I pay tremendous numbers of taxes and I used it and so did Warren Buffett and George Soros and the other people," Trump said, naming two known Democratic supporters.

When asked if he can say how many years he did not pay taxes, Trump said he could not.

The Trump campaign has said that he paid hundreds of millions of dollars in taxes, including payroll and VAT, but the candidate has not addressed the issue of federal income taxes.

For the final question, audience member Carl Becker asked the two candidates, "Would either of you name one positive thing that you respect about one another?"

The question drew laughs and applause from the audience.

In her response Clinton said she admired Trump's children.

Carl Becker asks the candidates if they can say anything positive about each other.

Trump called Clinton a fighter who doesn't give up.