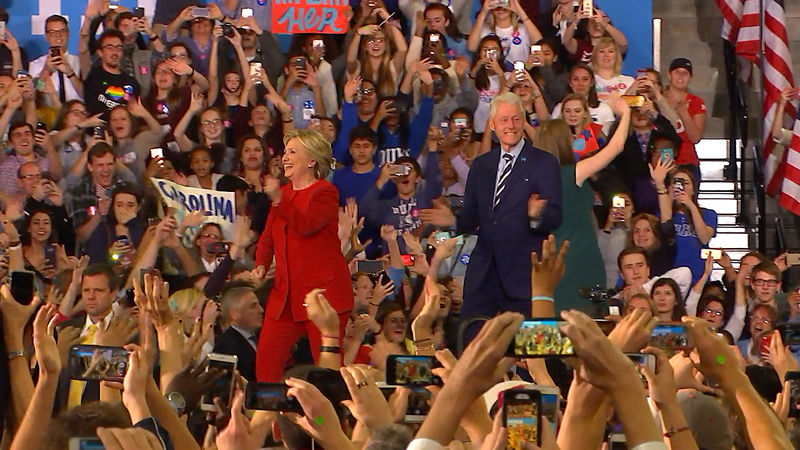 RELATED: WHERE THE CANDIDATES STAND ON THE ISSUES

Trump spoke Monday afternoon at the State Fairgrounds in Raleigh. The event was wedged between stops in similar battleground states of Florida, Pennsylvania, Michigan, and New Hampshire.

Hillary Clinton closed out her campaign rallies with one last stop in Raleigh.

She was scheduled to speak at a midnight rally in the first minutes of Election Day at Reynolds Coliseum on the campus of North Carolina State University. She took the stage shortly before 1 a.m., introduced by her daughter, Chelsea, and her husband, former President Bill Clinton.

"It is a choice between division and unity," Hillary Clinton told the crowd of mostly college students. "It is a choice that really goes to the heart of who we are as Americans."

She urged the crowd to vote Tuesday, saying they were voting for "an America where we build bridges not walls," in an oft-repeated shot at her Republican opponent.

Reynolds Coliseum filling up for #HillaryClinton Midnight Rally. We will be streaming live on https://t.co/xYW7LWnVJ6 #abc11 #ElectionNight pic.twitter.com/e9rDuhnlCO

Clinton spoke for only about 20 minutes, perhaps a concession to the lateness of the hour after a grueling final day of campaigning for both candidates.

"I believe it's the most important election of our lifetime," Clinton told a wildly enthusiastic crowd. "It's not just my name or Donald Trump's name on the ballot, it's the kind of country you want."

"An inspiring political candidate wouldn't have to bring half of Hollywood with her to excite North Carolina voters," said NCGOP Chairman Robin Hayes. "Note to Hillary Clinton: North Carolinians will head to the polls tomorrow and if you and your surrogates haven't motivated them yet, no midnight rally will."

Earlier in Raleigh, Trump told the roaring crowd that "it's time to fight for America."

I'm not a politician, I can say it proudly," Trump said. "My only special interest is you."

He also touched on healthcare and marketplace insurance premiums, which will see double-digit premium increases in 2017.

"Real change begins with immediately repealing and replacing Obamacare," Trump said. He told the crowd that next year, 95 of North Carolina's 100 counties will have only one marketplace insurer available.

MORE from @realDonaldTrump: "I have been everywhere" then mocks @POTUS for campaigning taking "old 747" into the ozone. @ABC11_WTVD pic.twitter.com/JkzvKhgyq1

Seeking to capitalize on Hillary Clinton's persistent problems with her perceived trustworthiness, Trump told the crowd that "real change means restoring honesty to our government."

In a contrast to the mantra often repeated at Democratic rallies that Clinton was the most qualified presidential candidate perhaps ever, Trump flatly stated that "Hillary Clinton is the most corrupt person ever to seek the office of the presidency of the United States."

Citing her deleted emails, ties to foreign entities and FBI investigations, Trump repeated his claim that Clinton is "being protected by a totally rigged system."

Trump was joined at Dorton Arena by North Carolina Gov. Pat McCrory, among others.