Trump was anxious for his turn in the spotlight after the four-day Democratic National Convention, which was culminated by Biden describing "a perfect storm" hitting the nation under Trump's watch as a result of the pandemic, the jolt to the economy that it delivered and racial unrest after the killing of George Floyd.

"Over the last week, the Democrats held the darkest and angriest and gloomiest convention in American history," Trump said in a speech to the GOP-aligned Council for National Policy in Arlington. "They spent four straight days attacking America as racist, a horrible country that must be redeemed. "

Biden, in his nomination acceptance speech, portrayed Trump as someone who tries to divide Americans. "United we can and will overcome this season of darkness in America," he said.

Trump, in recent speeches, has drawn his own stark images of unrest and violence in American cities and has positioned himself as a defender of law and order. He did so again on Friday, saying that if he loses, "no one will be safe in our country and no one will be spared."

Trump and the Democrats agreed on one thing, however. Just as the Democrats had repeatedly contended Thursday night, Trump declared, "The future of our country and indeed our civilization is at stake on Nov. 3."

He chided the Democrats, saying their convention did not address the threat that China posed to the U.S. or bringing safety to Democratic-run cities. He also jabbed at former President Barack Obama, saying, "You can't be a great president when much of what he has done we have undone."

Vice President Mike Pence said in an interview Friday that the Republican National Convention next week will focus on what Trump has accomplished, including on the economy and with his coronavirus response.

Pence promised a heavy focus on GOP support for law and order and said the Democrats had failed to acknowledge violence plaguing some U.S. cities.

"We're going to make sure that the American people see the choice here," Pence said.

Both Trump and Pence have blamed outbreaks of violence on a radical left, which they have sought to associate with Biden and his running mate, California Sen. Kamala Harris.

Trump made clear after the killing of Floyd, a Black man in Minneapolis, and the protests that called for changes to policing that he sides with law enforcement. He said there are always going to be "bad apples."

"We're with them and they're with us, and they've done a fantastic job," Trump said.

Trump also gave his starkest warnings yet about the impact that mail-in voting could have on the election, saying the final results may not be known for an extended period.

Pence appeared on morning TV talk shows to counter Democrats and promote the Republican viewpoint hours after Democrats wrapped their four-day convention. He promised a "great lineup of leaders" next week, along with a "great number of voices from all across the country to talk about what this president has done." Among known speakers are Trump, Pence and first lady Melania Trump.

The Democrats argued at their convention that Trump is unfit to lead the country for another four years. Obama, a frequent target of Trump's broadsides, warned that democracy itself is at risk under Trump.

Pence said, "I didn't watch much of it and, frankly, I couldn't watch much of it. There was so much negativity, nothing but ad hominem attacks."
Report a correction or typo
Related topics:
politicsdnc 2020joe bidenu.s. & worldpresident donald trumprnc 2020
Copyright © 2020 by The Associated Press. All Rights Reserved.
PRESIDENT DONALD TRUMP 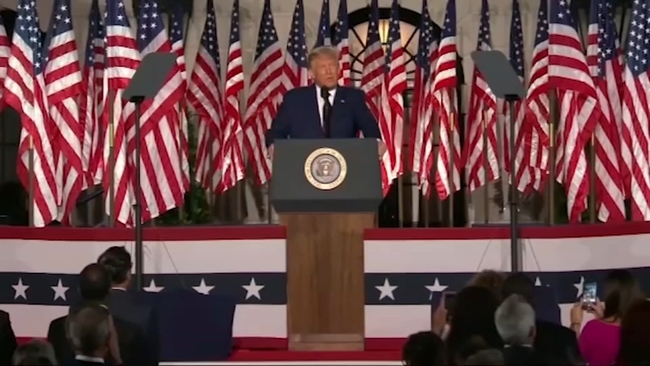